A group of Democratic senators has introduced a bill that would for the first time place legal limitations on the use of solitary confinement in federal prisons. The Solitary Confinement Reform Act (S. 3432), is co-sponsored by Senators Dick Durbin (D-IL), Christopher Coons (D-DE), Patrick Leahy (D-VT), Cory Booker (D-NJ), and Al Franken (D-MN).

The legislation would impact the approximately 10,000 individuals held in solitary confinement in federal prisons (about 6 percent of the total federal prison population), but not the remaining 70,000 or more people held in isolation in state prisons and local jails.

Materials shared with advocates by the sponsors cite “fiscal, human rights, and public safety concerns” with the practice of solitary confinement, including its cost, the devastating human toll it exacts in creating and exacerbating mental illness, and the fact that it may make survivors “more likely to engage in violence or other criminal conduct” upon release.

Details of the Legislation 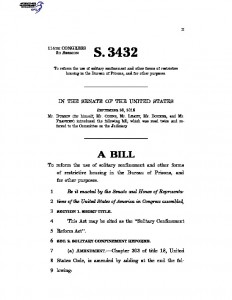 The heart of the bill, subsection (b), would establish the first set of federal limits on the implementation of solitary confinement, the use of which has typically been characterized by a lack of any meaningful oversight, accountability, or governing regulations.

Section (b)(1) would mandate that the federal Bureau of Prisons (BOP) only use solitary confinement for “the briefest term” and under “the least restrictive conditions practicable.” It would provide individuals in isolation with a minimum of four hours outside of solitary confinement per day, and with the opportunity to participate in “meaningful programming opportunities” and interactions with other prisoners, visitors, and clergy “as much as practicable.”

Other effects of subsection (b) would be to forbid the placement of minors and those who suffer from a serious mental illness in solitary, and would protect from solitary confinement pregnant and recently pregnant women, people with physical disabilities, and LGBT people who have been placed in isolation confinement for no reason other than their LGBT status. In an effort to reduce recidivism, subsection (b) would also establish new processes to facilitate transitions out of solitary confinement, both to the prison general population as well as to the free world.

In addition to setting restrictions on the use of solitary, the Solitary Confinement Reform Act would establish affirmative obligations for the Bureau of Prisons to protect the mental health and civil rights of people held in solitary confinement. The bill would require that individuals who are placed in isolation receive mental health evaluations within their first six hours of solitary confinement and every fourteen days thereafter.

Notably, the bill would also address the notorious lack of transparency surrounding solitary confinement in the United States. Amy Fettig of the American Civil Liberties Union’s National Prison Project explained that the bill would establish “a ground-breaking new mechanism for ensuring transparency and accountability within the BOP by creating an Office of the Civil Rights Ombudsman.” This new authority, Fettig explained, would be vested with the authority for “investigating civil rights complaints by prisoners and noncompliance with solitary confinement policies and practices as well as identifying areas where policy and practice can be improved.”

The President, Congressional Democrats, solitary survivors, and even Supreme Court Justice Anthony Kennedy have all recently spoken out against solitary confinement.

The introduction of the bill comes on the heels of a number of executive actions to institute reforms in the federal prison system. In January, President Obama announced a set of reforms specific to the use of solitary confinement, which were based on recommendations made by the Department of Justice after a detailed study. The President ordered that the Bureau of Prisons stop place juveniles, as well as those convicted of low-level prison rule violations, in isolation, and set in motion provisions to divert those with serious mental illness from solitary as well. In an op-ed in the Washington Post, President Obama cited the practice’s “devastating, lasting psychological consequences” and its potential to worsen both mental illness and recidivism. 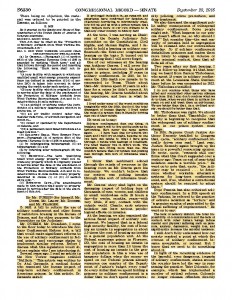 For Senator Dick Durbin and several other bill co-sponsors, work on reforming solitary confinement began several years earlier. In June 2012, the Senate Judiciary Subcommittee on the Constitution, Civil Rights and Human Rights, then chaired by Durbin, held the first Congressional hearing on solitary confinement. In introducing the new bill to the Congressional Record, Durbin cited the impact the testimony of solitary survivor (and Death Row exoneree) Anthony Graves had on those sitting in the hearing room: “We couldn’t believe that our system was putting inmates through this sort of inhumane treatment.”

The 2012 hearing, and a second one in February 2014, helped set in motion an audit of the use of solitary confinement by the federal Bureau of Prisons, which is turn provided data for the DOJ’s report and recommendations and the President’s executive actions.

For advocates, many of whom have been working against solitary confinement for close to a decade, the bill is a welcome, high-profile effort to take federal reforms to the next step. “The ACLU strongly supports the Solitary Confinement Reform Act,” Amy Fettig said, “because it codifies and builds on the President’s reforms to the federal Bureau of Prisons segregation policies and practices…This is a sensible and balanced bill that provides for more humane policies, better governance and accountability, and improved prison conditions that will support rehabilitation and re-entry.”

The bill also enters a political climate in which the role of racial discrimination in the criminal legal system is increasingly under scrutiny. As the Reverend Laura Downton of the National Religious Campaign Against Torture (NRCAT) observes, reforming the use of solitary confinement is itself an issue of racial justice, since “[in] the U.S., the severity of solitary falls disproportionately on people of color, mirroring disproportionate racial impact in policing and sentencing.” Downton believes that the new bill “takes great strides toward addressing the social moral crisis of solitary confinement…Communities of faith affirm that there are no throw away people, and the practice of solitary, which survivors often describe as being ‘buried alive’ must be replaced by therapeutic interventions rooted in human dignity and human potential.”

The ACLU and NRCAT are among more than a dozen groups who have endorsed the bill, also including the Leadership Conference on Civil and Human Rights, Human Rights Watch, Just Detention International, Campaign for Youth Justice, Center for Children’s Law and Policy, Human Rights Campaign, National Alliance on Mental Illness, and Washington Lawyers’ Committee for Civil Rights.

Limitations in Scope and Substance

Nevertheless, the bill, like other recent reform efforts by the Obama Administration, remains limited in both scope and substance. They only affect individuals held in federal prisons, which amounts to less than 10 percent of the total incarcerated population, the vast majority of which is held in state and local custody. In fact, the reforms and the Solitary Confinement Reform Act have only addressed practices in the Bureau of Prisons, the carceral system under the Department of Justice; the Department of Homeland Security’s parallel carceral system of migrant detention would remain untouched by the Solitary Confinement Reform Act, just as it is exempt from the recent federal ban on using private prisons. 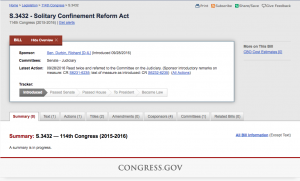 Read more about S.3432 on the Congressional Status page. There you’ll find any actions, amendments, cosponsors and committees attached to the bill. [URL]

Proposed federal policy changes affecting minors, including the Solitary Confinement Reform Act, have an even further reduced impact, as only a handful of children under 18 are held in the Bureau of Prison’s federal prison system. However, there is hope that states will follow the federal government’s lead and implement reforms at the state level, which would impact a far greater population.

The tenets of the bill fall far short of the recommendations made by the UN Special Rapporteur on Torture, Juan Mendez, who has repeatedly called for a strict limit of 15 days on the use of solitary confinement in general, a ban on solitary used as punishment (as opposed to as a safety measure), and a total exclusion from isolation of minors and people with mental illness.

Also troubling to some advocates are the “exceptions” to certain tenets of the legislation, including the call for four hours out-of-cell time. Laura Rovner, a professor of law at the University of Denver’s Sturm College of Law whose Civil Rights Clinic represents clients held at ADX Florence, the BOP’s federal supermax in Colorado, points out that these exceptions may be used to dramatically undermine the bill’s protections. She cites section (b) (7), which permits isolation in Administrative Maximum Facilities (ADX), in order “to house an inmate who poses an ongoing significant and serious threat to the safety of other inmates, staff, or the public that cannot be addressed through alternative housing.” That the men held at ADX fit this criteria, Rovner explains, has been a stance long-held by the BOP. The BOP does not need to produce nor present evidence to support its position, and thus this cannot practically be disputed. For this reason, Rovner comments, the bill, if passed, would likely “result in very little change for the many men who have been held in ADX for years or even decades.”

However, according to Rovner, the Solitary Confinement Reform Act does give advocates reasons to be optimistic. “The fact this bill has been introduced is itself enormously significant,” she says, and despite its shortcomings, “represents a recognition by federal lawmakers of the devastating harms of solitary confinement and the need to dramatically restrict its use in the Bureau of Prisons.” Specifically, she explains, “The bill’s overarching requirement that the use of solitary be limited to the briefest term and under the least restrictive conditions is important because it represents a philosophical and cultural shift in the use of solitary,” and a growing acceptance among lawmakers that “because solitary confinement is so harmful, it should only be used for contemporaneous control and security and with a concern for oversight and mental health monitoring.”

The only previous federal bill that sought reform solitary confinement, the Solitary Confinement Study and Reform Act of 2014, introduced by Representative Cedric Richmond (D-LA), never made it out of committee in the House. The current bill, while it is both far more sweeping and more specific, has the advantage of being introduced in the Senate, and of being sponsored by a group of Democratic senators with significant stature and clout.

Nonetheless, the legislation doubtless faces an uphill Congressional battle. Its first challenge will be to clear the Senate Judiciary Committee, currently chaired by Chuck Grassley (R-IA). If the Senate changes hands in November, however, its likely chair will be a bill co-sponsor, Patrick Leahy. So the immediate and long-term future of the Solitary Confinement Reform Act of 2016, like so much else, depends upon the outcome of one of the most contentious Presidential and Congressional election years in history.