Way Down in the Hole: Senate Hearing Challenges Solitary Confinement for Some, But Not All 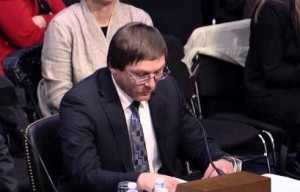 It didn’t take much reading between the lines to decipher the central message of last week’s Senate Judiciary Subcommittee hearing on solitary confinement. Lawmakers and witnesses alike appeared to agree: There are people in solitary confinement in American prisons who just don’t belong there. And then, there are other people who do.

In taking this approach, the hearing reflected a growing consensus on how to deal with the more than 80,000 people held in isolation in U.S. prisons. An increasing number of elected officials, corrections departments, and even some prison reform advocates are condemning not solitary confinement itself, but the “overuse” of solitary. They call for a “reduction” in the numbers of individuals held in isolation, beginning with vulnerable groups like children and people with mental illness, and moving on to those who commit minor infractions.

From a pragmatic point of view, it’s difficult to fault this strategy, which promises a prompt reprieve to those who are likely to be suffering the most, and are also likely to win the most sympathy from politicians and the public. Yet the approach is troubling to some advocates, who believe that solitary confinement as it is practiced in the United States today is by nature torture, and therefore unacceptable treatment for anyone. By sending the message that incarcerated individuals fall into two groups — those who deserve relief from the torturous effects of solitary confinement and those who do not — it may also have the effect of driving some people even deeper into the hole.

The message was clear enough in Chairman Dick Durbin’s opening remarks before a packed hearing room on Capitol Hill last Tuesday, as the Senate Judiciary Subcommittee on the Constitution, Civil Rights and Human Rights met for the second time in two years to consider “The Human Rights, Fiscal, and Public Safety Consequences” of solitary confinement.

Durbin’s statement began with broad strokes. The fact that “the United States holds more prisoners in solitary confinement than any other Democratic nation” is a “human rights issue that we cannot ignore,” the Illinois Democrat said. He quoted Anthony Graves, a Texas death row exoneree who testified at the first Senate hearing on solitary 2012: “‘No one can begin to imagine the psychological effects isolation has on another human being. Solitary confinement does one thing: It breaks a man’s will to live.'” In his seven years as chair of the subcommittee, Durbin declared, “I cannot remember more compelling testimony.”

But Durbin quickly narrowed his focus. Noting that the hearing was taking place on the one-year anniversary of the murder of a federal correctional officer, Durbin said emphatically: “Make no mistake….Some dangerous inmates must be held in segregated confinement.” By way of  example, Durbin described a visit to Tamms, the now-shuttered Illinois state supermax, where he asked officials to “take me to the worst of the worst,” and met a man who had murdered his cellmate. Some people would always be threats to the safety of staff and other prisoners, Durbin said, and “We’ve got to balance that against our concerns about humane treatment of those in solitary confinement.”

As if to head off potential critics, Durbin then addressed an apparent contradiction in his own political record on the issue of solitary confinement by bringing up Thomson Correctional Center. For years, Durbin has championed the federal government’s acquisition of Thomson, an unopened state prison in northern Illinois. Referring to Thomson at the hearing, Durbin promised that he would work with federal Bureau of Prisons (BOP) to ensure “that all prisoners held there are treated appropriately and humanely.”

That’s a promise that Durbin will find hard to keep. As the BOP confirmed to Solitary Watch last year, a significant portion of Thomson will be used for solitary confinement, including “Administrative Maximum” cells like those at ADX Florence, the notorious federal supermax in Colorado. A state-of-the-art isolation facility, ADX Florence epitomizes the worst that solitary confinement can do to the human mind and body. Several current lawsuits, as well as increased media coverage, have uncovered horror stories of psychotic prisoners at ADX Florence who gouge holes in their own flesh or eat their own feces, and frequently attempt suicide (sometimes successfully). On the day of the Senate hearing, Solitary Watch reported on the existence of a hunger strike and force-feedings in ADX Florence’s most secure unit.

In any event, Durbin wasted no time elaborating on how to provide a more humane environment for the “worst of the worst,” or even for the bulk of people currently held in solitary. Instead he turned his attention to a limited number of vulnerable groups. “Today I am calling for all federal and state facilities to end the use of solitary confinement for juveniles, pregnant women, and people with serious and persistent mental illness, except in the rarest of circumstances,” Durbin stated.

The opening remarks effectively set the agenda for the entire hearing, which featured witnesses hand-picked by Durbin’s staff — in consultation, he said, with Ranking Member Ted Cruz. In the 2012 hearing, Durbin had grilled BOP Director Charles Samuels on a wide range of issues related to solitary. This time he commended Samuels for cooperating with an “independent” audit of the BOP’s use of “restricted housing.”

Durbin asked Samuels about children (there are only 62 in the federal system, and 1 in restricted housing); mental health treatment (ADX now has 5 mental health staff treating 413 isolated prisoners, instead of 2, and they also have access to a “telepsychiatrist”); and pregnant women (women in restricted housing are rare, presently numbering only 197). Durbin did not question Samuels’ contention that individuals in long-term isolation receive “intensive treatment” and “adequate time out of their cells for recreational time.”

In friendly conversation with Texas Republican Ted Cruz, Samuels pointed to a decrease in the Bureau of Prisons’ use of isolation. “Since the hearing in 2012,” he said, “we have reduced the restricted housing population by over 25 percent. Within the last year, we have gone from 13.5 percent to 6.5 percent.” (The numbers do not come close to computing, and the BOP did not immediately respond to Solitary Watch’s request for clarification.)  Samuels also contended that “94 percent of the inmates within our system have no mental illness,” and only 555 federal prisoners had serious mental illness requiring “intensive treatment.” Samuels did not say how many of the 555 were in restricted housing, and no one asked.

In federal facilities, then, the total number of individuals in solitary who fall into the categories Durbin identified — children, pregnant women, and people with “serious and persistent mental illness” — is no more than a few hundred. This in a prison system where, according to its own director, close to 14,000 people are in some form of isolation.

On the other hand, Samuels told Cruz, there remain a lot of dangerous prisoners in the system who justify the use of solitary. “We have over 20,000 gang members in our system. They are watching this hearing, they are watching our testimony very, very closely, for the reason being if they see that we will lower our standards… it puts our staff at risk, it puts other inmates at risk.”

The BOP director’s only challenging exchange took place with Minnesota Democrat Al Franken, when the Minnesota Democrat asked him the size of “an average cell in solitary confinement.” After stuttering and prevaricating, Samuels shrugged and guessed “6 by 4” — an area smaller than a full-sized bed. (The actual dimensions are 7′ x 10′, closer to the size of an elevator.) It was a YouTube moment, embarrassing for the BOP. But in general, Samuels had acquitted himself well under softball questioning by subcommittee members.

The panel of expert witnesses, too, seemed designed to support the agenda of the day, and lacked the intensity of the panel at the 2012 hearing. Rick Raemisch, the Colorado prisons director who recently distinguished himself by spending a night in solitary and writing about it in the New York Times, looked highly enlightened compared with most prison officials. He declared solitary confinement to be “overused, misused, and abused,” and said he had cut Colorado’s use of administrative segregation in half.

Orange Is the New Black author Piper Kerman briefed the subcommittee on the use of solitary “to intimidate women who are being sexually abused by staff.” It is “a powerful disincentive to ask for help or justice,” she said. Prison Fellowship president Craig DeRoche focused on another vulnerable population: “Our jails have become our country’s mental health units” he said, and prisons should take steps to “reduce the use of segregation,” especially on people with mental illness. Marc Levin, director at the Texas Public Policy Foundation and a progenitor of Right on Crime, spoke of the need to “shine a light upon the most restrictive areas of government control,” and suggested several sensible but tepid reforms to reduce the use of solitary for “those who commit minor violations behind bars.”

Only Damon Thibodeaux, who spent 15 years on death row in Louisiana’s Angola prison before being exonerated, took an uncompromising position on the use of solitary confinement. The soft-spoken Thibodeaux talked about the mental and physical suffering of life in solitary, the hopelessness that had led him to consider suicide. “I can see no reason to subject anyone to this type of existence, no matter how certain we are that they are guilty of a horrible crime, and are among the worst of the worst.” Thibodeaux alone suggested that there could be alternatives to extreme isolation even for people who might need to be separated from the general population. He referenced his religious faith, and was the only witness to use the word torture:

I do not condone what those who have killed and committed other serious offenses have done, but I also don’t condone what we do to them when we put them in solitary for years on end and treat them as subhuman. We are better than that. As a civilized society, we should be better than that. I would like to believe that the vast majority of the people in the United States would be appalled if they knew what we are doing to inmates in solitary confinement and understood that we are torturing them, for reasons that have little, if anything, to do with protecting other inmates or prison guards from them.

Questioning the witnesses, Ted Cruz cut to the core of what he called “an issue that raises complicated issues.” Many people, Cruz said “would think that solitary confinement, particularly for an extended period of time, is not an appropriate punishment for relatively minor infractions, but could well be a necessary tool for the most violent inmates.” He asked the same question of all five witnesses: “Is there an appropriate role for solitary confinement, is there a need for it, and in what circumstances if at all?” All answered with qualified affirmatives, though Thibodeaux again distinguished himself by arguing for more humane treatment — including more human contact — for the few who might need to live in segregation.

Cruz, and all of the senators, made a point of offering special thanks to Thibodeaux for the courage it took for him to survive his ordeal and talk about it publicly. Yet during his decade and a half in extreme isolation, Thibodeaux, who at the time was presumed to be a murderer and one of the “worst of the worst,” would not have qualified for a single one of the “reforms” discussed at the hearing. That fact alone should lend weight to his plea for all people in prison to be free from the torture of solitary confinement.

7 thoughts on “Way Down in the Hole: Senate Hearing Challenges Solitary Confinement for Some, But Not All”