This afternoon, Unlock the Box: The National Campaign To End Solitary Confinement released a report based on research and analysis by Solitary Watch. The press release for the report follows. 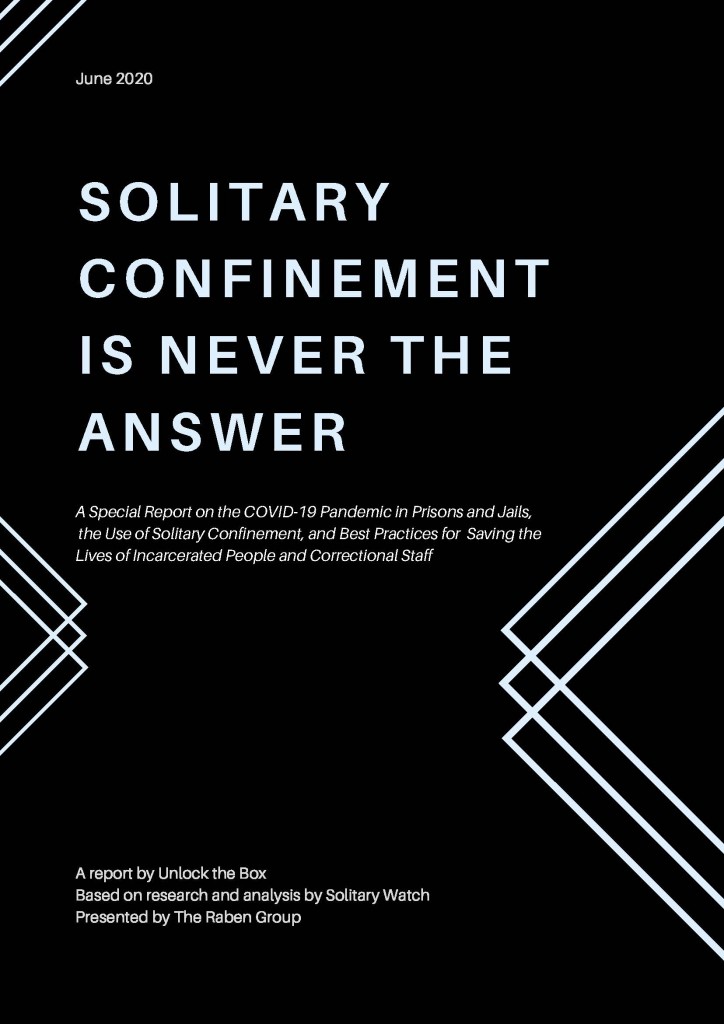 Unlock the Box, a national campaign to end the use of solitary confinement, is issuing this report in response to the dramatic growth in the use of solitary confinement in U.S. prisons, jails, and detention centers since the advent of the COVID-19 pandemic. Based on research and analysis by the national watchdog group Solitary Watch, the report’s findings demonstrate the urgency for federal, state, and local officials to immediately reduce the number of people behind bars, where the coronavirus infection rate is three times higher than in the population at large, and to use safe and effective alternatives to solitary to prevent the spread of the virus among incarcerated people and correctional staff, as well as their communities.

The use of solitary confinement had been declining steadily in United States prisons and jails over the past decade following a 2011 United Nations Report naming the country a global outlier for its institutionalized use of the practice. The U.N.’s Nelson Mandela Rules label prolonged solitary confinement of more than 15 days as a form of torture, and call for abolition of solitary confinement for children, pregnant women and people suffering from disabilities impacted by isolation, such as serious mental illness. Several states, including Colorado, Maine and New Jersey have enacted reforms to either ban or significantly reduce the practice over the past 10 years, and the Obama administration ushered in important new restrictions on solitary confinement for juvenile offenders in the federal prisons system in 2016.

“There is a human tragedy unfolding all around us in our nation’s jails and prisons, and that is the callous use of torture as a first, second and final response to COVID-19,” said Jessica Sandoval, Campaign Strategist for the Unlock the Box Campaign. “As this Special Report demonstrates, solitary confinement creates an atmosphere of fear and mistrust that prevents sick people from reporting their symptoms, and puts incarcerated people, correctional officers and local communities at greater risk from COVID-19. Rather than developing a comprehensive plan that would take at-risk people out of correctional facilities, officials at the federal, state and local level are reversing years of hard fought human rights gains by dramatically increasing this uniquely American form of cruel and unusual punishment.”

The Special Report, which draws on the expert analysis of leading medical, public health, and correctional health care professionals and criminal justice reform advocates working across the United States, paints a stark picture of the myriad ways in which under-prepared state and federal corrections officials have failed to develop comprehensive plans for containing the spread of COVID-19 inside their facilities, and have instead chosen to systematically respond with torture.

“From information on the public record, we know that there has been a huge surge in the use of solitary confinement in prisons across the country,” said Jean Casella, Co-Director of Solitary Watch. “And from accounts by incarcerated people, family members, and prison health care staff, we know that this is causing widespread harm, while failing to contain the spread of the virus.”

The report’s key findings are as follows:

• COVID-19 has led to an explosion in the use of solitary confinement in U.S. prisons, jails, and detention centers.

• While COVID-19 presents a grave and growing threat to incarcerated people and correctional staff, the use of solitary confinement will increase, rather than curb, the spread of the virus.

• Significantly reducing prison and jail populations remains the best way to protect the health and safety of incarcerated people, correctional staff, and communities from COVID-19.

• For people left within prisons, COVID-19 can be contained without the dangerous use of solitary confinement through universal testing, the safe separation of positive and non-positive residents and staff, and high-quality personal protective equipment (PPE) for all people living and working in these facilities.

• Quarantine and medical isolation in prisons must not resemble punitive solitary confinement, which is an internationally recognized form of torture.

The public health impacts of elevated solitary confinement during the COVID-19 crisis are enormous. Instead of being tested and provided with adequate medical attention, many incarcerated people demonstrating symptoms are swiftly transferred to solitary confinement where they are deprived of all social contact, receive no information or attention from medical staff, and are subject to unsanitary conditions.

To avoid such conditions, people held in prisons and jails are known to underreport symptoms of the virus which only further escalates its spread. Even if they do not demonstrate symptoms of COVID-19, incarcerated people report that they have been threatened with solitary or placed in solitary for refusing to follow rules that put them at risk, protesting unsafe conditions, or speaking out to the public or the press.

Using solitary confinement as the primary means to contain the virus only puts these populations and the individuals who monitor them at greater risk of contracting it. Failure to take bold action to stem the spread of the virus in correctional institutions could result in an additional 100,000 deaths, according to one recent report, and it is projected that more than two-thirds of those additional casualties would not be incarcerated individuals or staff, but rather people in their communities.

Drawing on the work of public health experts at Amend at UCSF, the Special Report shares best practices for saving the lives of incarcerated people and correctional staff for the current COVID crisis and beyond, including decarceration, using small group settings, and medical isolation as a means to properly treat infected individuals or those at high risk of infection. Finally, the Special Report explains why any positive changes should extend beyond the COVID-19 pandemic to ensure the long term health and safety of our communities.

“Solitary confinement is not a public health strategy – it’s torture,” said Amy Fettig, Director, ACLU Stop Solitary Campaign. “In order to stop the COVID-19 pandemic and protect people who live and work in prisons and jails we need science – not punishment and prejudice – to lead the way.”

“This report reveals a harrowing truth: that punishment, in the form of solitary confinement, is being used as a default policy when it should be a measure of last resort,” said Johnny Perez, Director of the National Religious Campaign Against Torture’s U.S. Prisons Program. “The systemic use of punishment in the form of solitary confinement in response to the global public health crisis of the pandemic has allowed corrections systems to further harm the very people they are responsible for protecting. Facilities built for punitive isolation are being used to confine those who have tested positive for the coronavirus. Imagine having headache or fever and then being placed in a closet for reporting your symptoms. That is the reality our incarcerated neighbors are facing, and even more so at a time when the nation has come to its knees in recognition of state sponsored violence against black and brown people of color. People need care and not punishment, compassion not retribution, and second chances not death sentences.”

“Separating people who become infected with COVID-19 is a necessary public health measure to prevent the spread of COVId-19, particularly in prisons and jails,” said Dr. Brie Williams, Founder and Director of Amend at UCSF. “But turning to the punitive practice of solitary confinement in response to the pandemic will only make things worse.”

Unlocking the Box in Louisiana

Louisiana on Lockdown: The History of Solitary Confinement in Louisiana