Audit of Solitary Confinement in Federal Prisons: An Inside Job Reaches Foregone Conclusions

A long-awaited audit of the use of solitary and other forms of isolated confinement in the federal Bureau of Prison (BOP) recommends minor reforms while affirming the overall legitimacy and efficacy of a system that holds more than 10,000 people in extreme isolation.

At 242 pages in length, the Federal Bureau of Prisons: Special Housing Unit Review and Assessment provides a wealth of detail (though relatively little quantitative data), and a number of obvious, highly circumscribed findings. It notes inadequacies in mental health care and “reentry preparedness” for people in isolated confinement, and criticizes the BOP for some inefficiencies and inconsistencies in its policies and practices.  But as an overall critique of solitary in the federal system, it is vastly inferior to an earlier report by the Government Accountability Office (GAO), which found that the BOP did not know whether its use of “segregated housing” had any impact on prison safety, how it affected the individuals who endure it, or how much it all cost American taxpayers.

The nature of the assessment should surprise no one. While it describes itself as “an independent, outside review,” the audit was commissioned in 2013 by the National Institute of Corrections, an agency of the BOP, and carried out by a CNA, a large defense contractor with a sideline in corrections. As stated in the report on the audit, “The CNA project team was composed of eight former state correctional system directors, four former deputy correctional system directors, two psychiatrists, and two PhD-level criminal justice system researchers. All team members had substantial experience in the management and evaluation of restrictive housing units.”

In November 2013, as the audit got underway, the leaders of this team met with representatives of advocacy organizations working on the issue of solitary confinement, including the ACLU, National Religious Campaign Against Torture, CURE, Vera Institute for Justice, National Association for Mental Illness, and Prison Fellowship. According to individuals present at that meeting, the organizations expressed their hope that they would remain in touch throughout the audit. But they were offered no further opportunities for consultation and received no response to subsequent requests to give input.

Submitted to the BOP in December but released to the public only last Thursday, the report reveals a fatal flaw in the first of its “key findings”: “The general conditions of confinement in restricted housing units are consistent with national regulations and standards.” In other words, the audit used as its measuring stick the “national standards” of a country that is an extreme outlier when it comes to the use of long-term solitary confinement, which is rare in the rest of the developed world and has been denounced by the UN Special Rapporteur on Torture and a host of human rights groups.

In the end, the audit measures the BOP largely against itself. Taking as its baseline 2011, the first year for which complete data on “segregation populations” was available, the report notes a 31 percent drop those populations. The biggest drop was in the Special Housing Units (SHUs) used largely for disciplinary confinement, and is based on a “self-reported estimate” from the BOP. 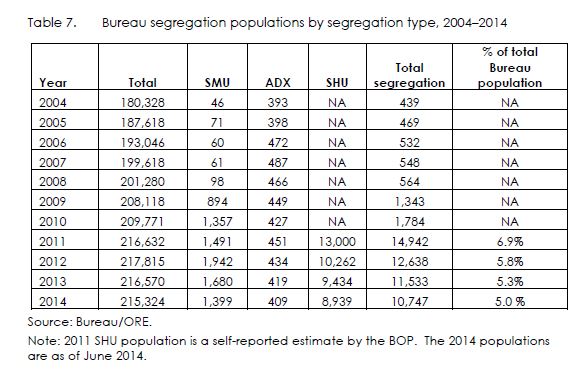 As of June 2014, 10,747 people remained in isolated confinement in the Bureau’s SHUs, Special Management Units (SMUs), and at the Administrative Maximum (ADX) facility in Florence, Colorado, which holds prisoners in the most extreme isolation (and where CNA was banned from interviewing the most severely isolated individuals). This figure comprises one in twenty prisoners of the people in BOP custody.

In another section, the report compares the number of disciplinary violations committed by prisoners “Before” being placed in isolation with those committed “During and After” isolation. The results, unsurprisingly, show that people being held in concrete cells for 23 hours a day are less likely to commit infractions, some of the most common of which are “refusing to obey order” and “engaging in sex acts.” It does not question the usefulness of placing people in isolation to begin with for reasons such as these.

As for the impact of solitary on the people who endure it, the study ambien generic does look like relies on interviews with a “representative” sampling of individuals held at the facilities studied, some of whom were questioned in the presence of staff. There is little reference to the growing body of evidence showing the permanent damage to the brain caused by periods of isolation, or the panoply of symptoms displayed by people in solitary, even those without a history of mental illness. There is no reference to the men at ADX who, according to a current lawsuit, “interminably wail, scream and bang on the walls of their cells. Some mutilate their bodies with razors, shards of glass, writing utensils and whatever other objects they can obtain. Some swallow razor blades, nail clippers, parts of radios and televisions, broken glass and other dangerous objects.” In fact, the report finds inconclusive the charge that solitary worsens mental illness, and that it increases rather than decreases prison violence.

The lengthy report will require further study and analysis. But its overall aim seems clear: To quiet serious criticism with a series of modest recommendations, while reifying the overall system of punishment within punishment. Many of the recommendations reflect plans the BOP has already set in motion, such as improving mental health care and moving more people with mental illness out of the SHUs and SMUs to special isolation units designed for that purpose. The audit also recommends slight reductions in the duration of some stays in solitary, and better treatment of those who are isolated for reasons of protective custody.

Overall, the recommendations align well with statements made by Senator Dick Durbin, whose 2012 Congressional hearing on solitary confinement apparently set the audit process in motion. Durbin has emphasized in his public statements that while some people—including youth and individuals with mental illness—do not belong in solitary confinement, other people most definitely do belong there. In a press release following the publication of the report, Durbin stated: “The independent report released by the BOP today will inform our next steps as we move towards meaningful reform of solitary confinement practices in our prisons. I commend Director Samuels for agreeing to undergo this assessment, and for his commitment to continuing to reform BOP’s solitary confinement policies and practices.” As we have reported many times, Durbin has been instrumental to plans for a second supermax prison in his home state of Illinois, which will significantly increase both ADX and SMU capacity for the BOP.

The National Religious Campaign Against Torture—one of the groups that was consulted at the start of the audit, and then ignored—had stronger words for the report. “NRCAT and our faith partners across the country have been calling for a universal prohibition of prolonged solitary confinement exceeding 15 days,” said the group’s director of U.S. prisons policy, Rev. Laura Markle Downton, in a press release. “Recommendations—like those contained in this report—that do not prohibit long-term isolation in favor of rehabilitation and treatment are inadequate in the face of both science of the mind and the ethics of human dignity, which condemn such conditions as torture.”

This audit, if nothing else, shows what is wrong with “independent” investigations done on the same government agencies who hire and pay the investigators. And it highlights the need for truly independent oversight of the use of solitary confinement in particular, and of the prison system in general. The closest thing we have in this country may be the GAO, which will now see its highly critical report dismissed in favor of this more “comprehensive” audit.

What we need are independent bodies outside the prison system, like the prison inspectors, ombudspeople, and citizen monitoring boards found in other countries. We need the U.S. government to grant the request of UN Special Rapporteur on Torture Juan Méndez to visit ADX, and lift the ban on allowing journalists into ADX or any solitary confinement units. Then we might have reports that do more than tinker around the edges of torture.

One thought on “Audit of Solitary Confinement in Federal Prisons: An Inside Job Reaches Foregone Conclusions”