• The Philadelphia Inquirer published the “Lockdown Diaries,” a set of writings from incarcerated people during Pennsylvania’s longest ever statewide lockdown. Instituted because of the coronavirus pandemic, the lockdown basically places everyone in the prison system in indefinite solitary confinement in an effort to control contagion (despite the existence of more humane and effective alternatives). Accompanied by illustrations created by reporter Samantha Melamed, the diary entries describe what it’s like to be locked in a cell for all but 40 minutes a day and how people spend those precious minutes outside of the cell. Thomas Schilk, held at SCI Phoenix said, “Prison is bad all the time, but the smaller the box you’re forced into, the worse it gets. It’s like being locked in a bathroom for weeks.” Robert Pezzecca said, “I had to use the toilet today in front of my cellmate. Guard ordered me to take down the sheet I had hung up to separate our view of each other. It’s not right. My mental health is suffering.” Another man held at SCI Phoenix, Jorge Cintron, said, “It concerns me how quickly it’s forgotten that not long ago five men committed suicide in two months at SCI Graterford.” According to Cintron, three people have recently died at the prison, two of whom had tested positive for COVID-19. 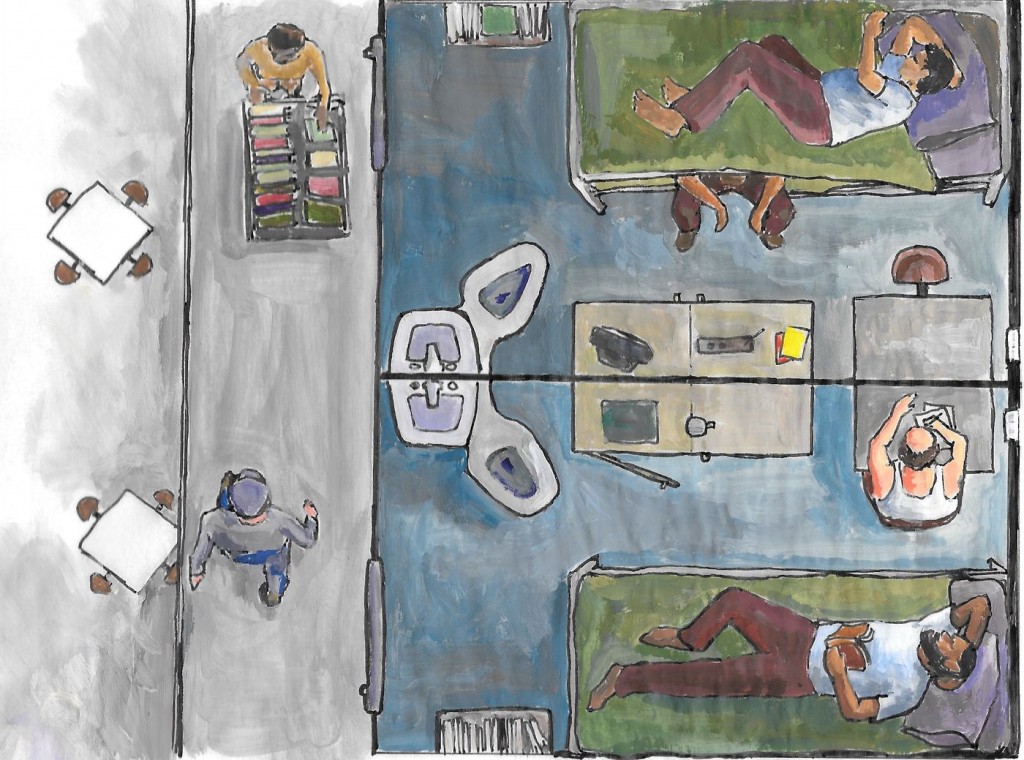 • The Marshall Project published an article written by Wesley Williams, currently held in solitary confinement at Upstate Correctional Facility in New York. Wesley described listening to Governor Andrew Cuomo on his radio “in the box” talking about the “pain of isolation” and the real “emotional trauma” people are now experiencing unable to hug someone or be comforted during this time of sheltering-in-place. Wesley, who has been incarcerated for fifteen years, recalled the last time he remembered receiving a hug: when we was eighteen years old, held at Rikers Island and an older incarcerated man comforted him. Since then, he says he’s felt “no human touch beyond an occasional rough pat-down from a correctional officer.” Wesley writes, “No human being deserves to rot away in an 8-by-12 box, in solitary deprivation. Long after COVID-19, there will still be a population here, alone and deprived of human touch.”

• The Intercept reported that 43-year-old Tiffany Mofield, an incarcerated African American mother of three, died on April 29 in the administrative segregation unit at Edna Mahan Correctional Facility in New Jersey. Mofield had been moved back from the quarantine unit to solitary confinement despite her persisting COVID-19 symptoms. Angelina, another incarcerated woman who witnessed Mofield’s death, said that officers locked Mofield in the shower, though she told officers “she could not breathe.” Angelina said, “She never would have died if she was released from ad-seg and returned to the facilities’ general population. All of us are at heightened risk of death in ad-seg the way it is operated at this facility. Inmates routinely threaten to commit suicide and are routinely ignored.”

• Courthouse News Service reported on arguments before the Ninth Circuit Court of Appeals, which revisited the terms of a landmark 2015 settlement between the California Department of Corrections and Rehabilitation (CDCR) and a class of 1,600 people held in prolonged solitary confinement in the state’s Security Housing Units (SHU), represented by the Center for Constitutional Rights (CCR). In the settlement, CDCR agreed to end the use of indefinite solitary confinement, which was often based on unconfirmed “gang affiliation.” At the hearing, attorney Samuel Miller argued that men are still being held in solitary confinement, in violation of the agreement. “Half of them are being held in their cells longer than when they were in SHU,” Miller said. While CDCR argued that transferring the men out of the SHU fulfilled the settlement, CCR attorney Rachel Meeropol said, “Being locked in a cell for 23 hours a day is solitary confinement no matter what name the CDCR calls it.” The court has not yet released its ruling.

• The Marshall Project published an article on the effect that the coronavirus pandemic has had on American juvenile facilities, many of which now hold youth in solitary confinement without rehabilitative or educational programs. Based on lawsuits and interviews with incarcerated youth, the article reports that solitary confinement has “resurged in an effort to socially distance” and now youth are increasingly held in harmful conditions mirroring adult confinement. Amy Fettig, director of the ACLU National Prison Project’s Stop Solitary campaign, said, “As ever, putting kids in solitary, instead of medical isolation monitored and administered by health professionals for the briefest of times needed, is just about administrative convenience for adults.” Data is not available for how many of the 44,000 incarcerated youth across the country are being held in solitary during the pandemic, partially due to facilities barring oversight measures.

• According to KATU, seven incarcerated people are filing a lawsuit against Oregon Governor Kate Brown, the Oregon Department of Corrections, and ODOC Director Colette Peters, calling for immediate action to reduce the state’s prison population and increase medical precautions in prisons. The plaintiffs are all over 60 years old and have medical conditions that make them more susceptible to the virus. The state in total incarcerates more than 1,000 people over the age of 60. The director of Civil Rights Project and Oregon Justice Resource Center, Juan Chavez, said that people are being sent to solitary confinement for requesting proper health measures. “People are afraid to speak up or, frankly, be tested if they’re just going to be treated that way,” said Chavez. As of May 12, the ODOC reported 101 incarcerated people and 28 staff had tested positive for COVID-19.

• WRAL reported that community members across North Carolina held a “social distance protest” last week, calling for people to be released from the Central Prison in Raleigh and the Neuse Correctional Institution in Goldsboro. Demonstrators called for an end to the use of solitary confinement and the implementation of proper health care during the pandemic. An organizer of the demonstration, Julie Schneyer, said, “Over years and years, what we’ve seen in DPS [Department of Public Safety] facilities is systematic, ignoring of any kind of human rights…People certainly are extremely concerned, people are terrified behind the wall, they feel like they’ve been given a death sentence.”

• The Southern Poverty Law Center reported that a 20-year-old transgender woman faces isolation, transphobic abuse, and inadequate health care at Winn Correctional Center, a facility privately managed by LaSalle Corrections that houses Immigration and Customs Enforcement (ICE) detainees along with Louisiana state prisoners. Karime, an asylum seeker from Mexico, says that she has been sent to solitary “as punishment” for standing near a man and was threatened with solitary upon her request to see a doctor when she became ill. Karime expressed fear for her life in the facility, where she receives physical threats and unwanted sexual advances from men. “I’m depressed and suffer anxiety and insomnia. I almost would’ve preferred being in Mexico, even though I would be harmed more there,” Karime said. “From the moment I wake up until the moment I go to sleep, it’s psychological torture.”

• PEN America conducted an interview with Keri Blakinger, a formerly incarcerated reporter for the Marshall Project, about women in prison, the effect of the coronavirus on incarcerated women, and her time in solitary confinement. Blakinger recalled, “I remember going in [to solitary], and I was just blown away by how neon white the walls were, and the window…you can’t actually see out of it…There’s no clock, and there’s nothing. I didn’t have any books…You can hear the muffled screams from the people next to you, but you can’t really hear what they’re saying.” Blakinger continued, “A lot of people say to me that solitary—they like being alone. They’re sure they wouldn’t mind solitary confinement, but solitary confinement is not being alone—it’s more like being buried alive. You lose sense of time. You sometimes question if you still exist, and you don’t know when you’re getting out or when this ends.”