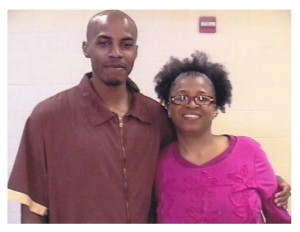 Carrington Keys and his mother, Shandre Delaney, during a prison visit.

On Monday, March 13, after a legal battle lasting nearly seven years, the last of the men known as the Dallas 6 had his day in court. Carrington Keys was one of six people–all of them men of color–who faced riot charges after protesting staff brutality in the Restricted Housing Unit (RHU) at SCI-Dallas, a prison in Luzerne County, Pennsylvania.

As reported previously in Solitary Watch, people in the RHU are locked into their cells for nearly 24 hours a day. People can be sent to the RHU for violating prison rules, including various nonviolent infractions. Keys was placed in the RHU for 90 days in 2001 after fighting with another prisoner. But staff found reasons to extend his stay in isolation. “He kept being written up for things like covering his light because the lights are on all night or for verbal assault for talking back to a guard,” his mother, Shandre Delaney, told Solitary Watch. Keys spent most of his twenties in the RHU. He was briefly released in 2009 but returned to the RHU later that year on charges of having contraband. He attributes his return to solitary confinement to the numerous grievances, lawsuits, and criminal complaints he filed against prison staff.

In 2009, Human Rights Coalition-Fed Up! began an investigation into prison conditions at the facility. Through letters from people inside, interviews with family members, institutional paperwork, affidavits and civil litigation documents, the group compiled Institutionalized Cruelty, a 93-page report detailing “the cruelty, illegality, suffering, racism, violence, and despair that constitute the reality inhabited by inmates at SCI Dallas.”

According to the report, cells were filthy and the water from the sink was often brown. Other complaints included failure to provide physical and mental health care, deprivation of water, and routine physical violence. Prisoners also reported that staff tampered with their food, and frequently refused to feed a person by passing his cell as they handed out food trays (a practice known as “burning them for their trays”).

On April 29, 2010, 20-year-old Isaac Sanchez noticed that staff did not give the man in the adjoining cell, Anthony Kelly, a food tray. Like Sanchez, Kelly had participated in HRC’s investigation, detailing verbal abuse, lack of water, and assaults by multiple staff on one person. “I said, ‘My neighbor’s not getting fed. That’s not policy,’” Sanchez told Solitary Watch. Sanchez and the officer argued, with Sanchez locked behind his cell door and the officer in the hallway.

Staff told Sanchez to pack his property and be prepared to move. Seeing twelve other correctional officers in the hall, Sanchez said that he feared for his safety and refused to move. Sanchez reported that he was then sprayed with pepper spray, beaten, and tasered. He said staff took him to the law library where they cuffed him into a chair by his wrists and ankles.

Others in the RHU attempted to do something about Sanchez’s beating. In Pennsylvania’s RHU, when a person covers the window to his cell, a supervising officer is called to his cell to ensure that he is not self-harming. In the past, people in the RHU have used this tactic to call in higher-ups to complain about guard brutality. That day, six men covered the windows of their cell doors after Sanchez was beaten and taken to the restraint chair. “That was our last resort. We didn’t think they [the captain or superior] was going to help, but what can you do? You’re locked in the cell,” explained Derrick Stanley.

No supervising officer appeared. Instead, after asking to speak to the county public defender’s office, the men say, they were pepper sprayed and beaten. Video clips obtained later from the prison and compiled by Keys’s mother, Shandre Delaney, show five officers in face masks and body armor piling onto and then “extracting” (or forcefully removing) Keys from his cell. On the video, Keys can be heard shouting, “I’m not resisting! I’m not resisting!” In the debriefing video that followed the cell extraction, the five officers as well as the officer acting as cameraperson reported no injuries.

Months later, the state filed charges against the six men, accusing them of riot and intent to prevent or coerce an official act, which carry an additional seven years in prison if convicted. For years, the case dragged on. Eventually, Anthony Kelly, who had served his maximum sentence but was held in jail pending these charges, pled guilty to the riot charges to be released. Stanley, who had been released, pled guilty to resisting arrest so that he could move on with his life. Anthony Locke was found guilty of disorderly conduct, but his sentence of several months was allowed to run concurrently to his current prison sentence.

In 2016, the remaining three—Andre Jacobs, Carrington Keys and Duane Peters—went to trial. When the jury deadlocked after only a few hours of deliberation, the district attorney dropped the riot charges, but then charged Keys with six felony counts of aggravated harassment. The prosecutor did not charge Jacobs or Peters again; both men were returned to prison to continue their sentence.

On March 13, 2017, the judge ruled that Keys was guilty of disorderly conduct, a misdemeanor conviction, but not of aggravated harassment. She sentenced Keys to four to eight months to run concurrently with his current sentence.

For Shandre Delaney, the verdict is a relief. “Now he can move on—and hopefully come home.” Keys has been eligible for parole since 2012 and has appeared before the parole board several times. Each time, she says, the parole board has cited his pending charges as one of the reasons to deny his release. She hopes that the next parole hearing will result in a release date.

But even if her son comes home, Delaney isn’t done. “So much is happening [inside prisons] that needed to be exposed. This case exposed a lot of that.” she told Solitary Watch the week after Keys’s final court date. She says she and HRC continue working to collect information about Pennsylvania prison conditions to bring more public awareness. “We have to put an end to solitary in our state. We need to help our prisoners have a voice and to support them when they resist torture, starvation, and abuse.”