Most residents of the nation’s death rows live in long-term solitary confinement, in what are effectively supermax units for the condemned. They are subject to all of the devastating psychological and physical effects of prolonged isolation, with the added torment of knowing that someday they will more than likely be put to death at the hands of the state. According to a 2009 report from the Death Penalty Information Center:

Psychologists and lawyers in the United States and elsewhere have argued that protracted periods in the confines of death row can make inmates suicidal, delusional and insane. Some have referred to the living conditions on death row–the bleak isolation and years of uncertainty as to time of execution–as the “death row phenomenon,” and the psychological effects that can result as “death row syndrome.”

Four times a year, the NAACP Legal Defense and Educational Fund compiles statistics and other information on the men and women who live in these conditions on death rows across the United States. It has just released the Fall 2009 edition of Death Row USA, which has figures through October 1, 2009. At that time, there were 3,263 death row inmates in state and federal prisons. The largest number are in California (694), followed by Florida (395) and Texas (339). About 44 percent of those death row inmates are white, 42 percent are black, and 12 percent are Latino. More than 98 percent are male.

In the grim calculus of the death penalty, the numbers have changed somewhat in the intervening six months. Twenty-five prisoners have been executed since October 1, 2009. Two more died of natural causes, including an Arizona inmate who, at age 94, was the oldest death row prisoner in the United States. We could not find reliable information on the number of new death sentences meted out in those same six months–but since death sentences were down in 2009 and executions were up (after the Supreme Court gave the go-ahead to lethal injections), it’s safe to say that America’s death rows are not quite maintaining their replacement rate. 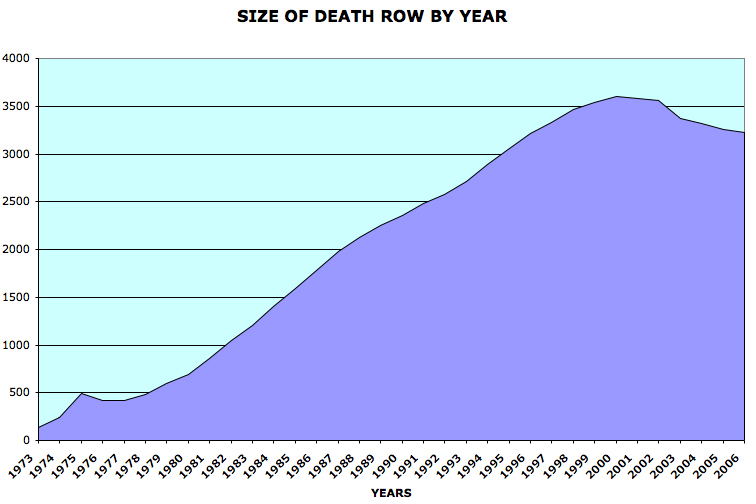