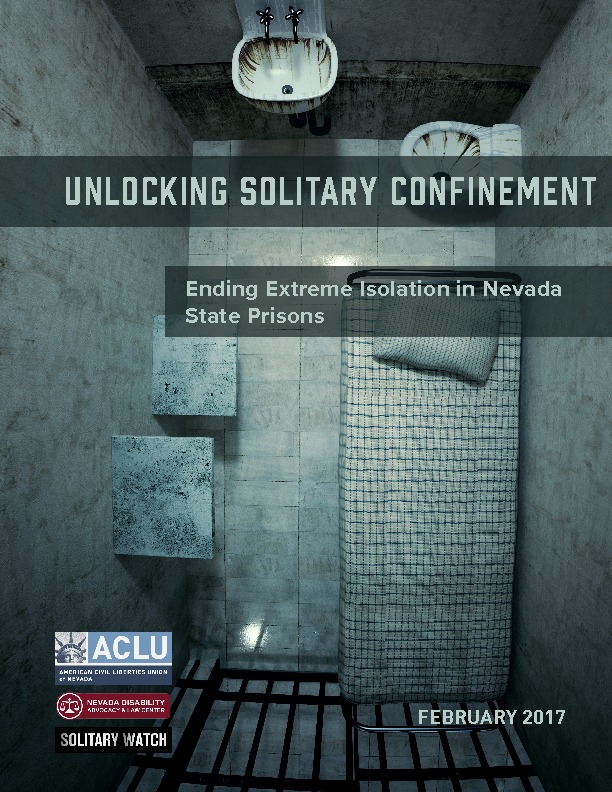 A new report produced by the ACLU of Nevada, Nevada Disability Advocacy & Law Center, and Solitary Watch is the first to document the scope and impact of solitary confinement in Nevada. Unlocking Solitary Confinement: Ending Extreme Isolation in Nevada State Prisons reveals the number of people held in solitary in the state’s eight state prisons, details the conditions experienced by men and women held in isolation, and provides recommendations for sweeping reform.

The 48-page report is the result of two years of collaboration between the three groups. Public records requests to the Nevada Department of Corrections were initially met with claims that the state’s prisons did not employ solitary confinement, and were ultimately limited by the NV DOC’s lack of data collection on the practice. Yet all three groups knew from our work that solitary was widely used throughout Nevada’s prison system, and was in fact the norm at the state’s notorious supermax, Ely State Prison.

With names supplied by Solitary Watch, we took the pioneering approach of collecting data directly: more than 700 incarcerated individuals currently or previously held in solitary in Nevada were contacted. Nearly 300 of them, courageously, responded to our appeal for information, completing a ten-page survey on subjects ranging from the problems with the provision of health care, exercise, and decent food to the sometimes brutal treatment by corrections officers to the harmful impact of isolation on respondents’ mental state.

Data was aggregated and analyzed by Helen Zaikina-Montgomery for the ACLU-NV, while the report’s lead writer, Solitary Watch’s Katie Rose Quandt, drew from the surveys for narrative accounts of life in Ely and other correctional facilities, as well as from interviews conducted by the Nevada Disability Advocacy & Law Center with incarcerated individuals with disabilities.

“I will be haunted by these terrible experiences until the day that I die and will take these memories and experiences and the effects of it all with me to my grave!” said one man who suffers from mental illness, but has been held in solitary in Ely. “The way people are being treated behind these prison walls in Nevada is wrong.”

The publication of the report comes at a pivotal time for prison policy in Nevada, under the leadership of DOC Director James Dzurenda, who took office in 2016. Dzurenda has, for the first time in the history of the state’s prison, shown some willingness to reconsider how—and how much—Nevada utilizes solitary confinement. Late last year, Nevada announced that it had been chosen to participate in the Vera Institute of Justice’s Safe Alternatives to Segregation Project, which will study Nevada’s use of solitary and make recommendations for change based on best practices and on successful reforms in other states.

The three groups that collaborated on Unlocking Solitary Confinement, along with other advocates, hope that both DOC leadership and state legislators will immediately respond to the recommendations made in the report, which include a comprehensive audit of Nevada’s use of solitary confinement; institution of policies and practices designed to end the use of long-term isolation, including a 15-day limit on solitary; and a total ban on solitary for people with physical and psychological disabilities.

For Solitary Watch, the report marks our first foray into a major new initiative. Through our State-Based Reporting Project, we will conduct an unprecedented level of quantitative and qualitative data from selected states, and use them to produce both investigative journalism and comprehensive reports. Choosing states where such work can have the most impact, we are collaborating with local advocacy organizations to produce the reports.

The reports will draw on both massive public records requests and surveys sent to thousands of people in solitary. Upcoming states targeted by the project include Louisiana, where a staggering 15 percent of people in prison are held in some form of solitary confinement, and New Jersey, where we are partnering with Princeton Students for Prison Education and Reform (SPEAR) and the ACLU of New Jersey, and where this work will help build momentum to override Governor Chris Christie’s recent veto of solitary confinement reform legislation. Our work on this project is made possible by support from the Roddick Foundation and the Langeloth Foundation.

Report: 500% Increase in Use of Solitary Confinement During COVID-19 Puts Hundreds of Thousands of People at Risk

Unlocking the Box in Louisiana

Louisiana on Lockdown: The History of Solitary Confinement in Louisiana