Voices from Solitary: We Are All Animals 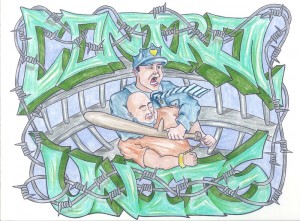 Jacob Barrett is an Oregon state prisoner who was transferred to Florida under the Interstate Corrections Compact. He was held in the Intensive Management Unit in Oregon, and then in Close Management in Florida—both euphemism for solitary confinement. Barrett has served two decades of a life sentence for a murder committed when he was 19 years old. Earlier this year, he went on a hunger strike not only against the conditions he himself has endured, but also against the rampant abuses in Florida’s prisons.

“If a man was locked up from birth until age 20 years in a dungeon and then released we should see that he lacks more and will be less rational than a beast who has been bred and disciplined.” —William Cavendish, The Duke of Newcastle

William Cavendish, the Duke of Newscastle, wrote a book, which contained the above quote. “A General System of Horsemanship” was published during the Interregnum era (a period between the execution of King Charles 1st and the restoration of King Charles 2nd) when the Duke was in exile as a royalist. He was a man who knew horses.

I was in the Oregon Intensive Management Unit (IMU) speaking to a friend in a cell across from mine. As I spoke I stood in the doorway unconsciously bumping on shoulder against the door frame, then the other shoulder against the other. A slow, rhythmic motion. My friend, who also raised horses, comment on my movements, telling me horses who have been raised in stalls and not let out to roam develop the same behavior by bumping their hindquarters on one side of the stall then the other. This is usually associated with abused horses.

As soon as he said this I looked down the tier at the other cells and could see a number of prisoners doing the same thing. I doubt a single one of us consciously thought about it until my friend mentioned it. Most of us had spent more than a decade in isolation. We took on a behavior traditionally associated with a caged animal.

Ironically, a person who abuses a horse by caging it like that can be charged with animal abuse and face going to prison where they will be, well, treated like the horses they abused.

Criminal justice and psychiatric literature  tells us today that long-term isolation is like putting a dog in a cage, poking it with sticks for most of its life, and then letting it loose in the middle of a city hoping it won’t bite anyone.

I haven’t been in a dungeon since birth. I came to prison at the age of 19. I have been in isolation 20 out of my 21+ years incarcerated. I have to wonder if I, and the men and women like me, were ever to be released, “should [we] see the [we] lack…more and will be less rational than a best who has been bred and disciplined”?

If we know such treatment is detrimental to an animal’s mental and physical well being, how can we justify treating our fellow man worse than animals?

I encourage those reading this essay to read “Post Traumatic Stress After Prison” by Jordan Halliday, viewable and downloadable at afterprisonzine.org. After Prison is a ‘zine project that shares stories of life after prison from former Earth and animal liberation prisoners. Halliday spent only a fraction of time in prison that many others pend in isolation, but his journey shows that even a short exposure to the prison environment can produce serious mental health effects in a person.