Voices from Solitary: Is "Torture" Too Strong of a Word? 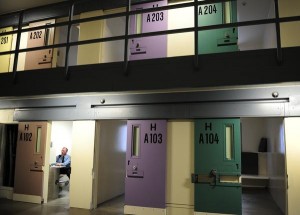 The following comes Ryan Pettigrew, who spent most of his eight years at the supermax Colorado State Penitentiary (CSP) in solitary confiinement. Diagnosed with bipolar II disorder, Pettigrew, like an estimated 57 percent of prisoners confined in isolation in Colorado, suffers from mental illness. Recalling his response when asked by his parole officer if his time in isolation legitimately qualifies as ‘torture,’ he writes, “[P]rison staff had me strip celled for 24 hours in a cold cell that had someone else’s puke and piss all over the floor. I was stripped of clothing… Eventually I had to take a bowel movement but was denied toilet paper and soap, yet forced to eat with my bare hands.” The following entry, entitled “Effects of Solitary Confinement,” comes from Pettigrew’s blog, A Madman’s Path To Reason.

Pettigrew, now 35, was released in August of 2012 from CSP. While there, he befriended Evan Ebel, who was released directly from solitary in January 2013 after making threats to torture and kill correctional officers and others. Ebel went on to murder corrections chief Tom Clements two months after his release. In an interview following Clements’ death, Pettigrew shares a series of revealing text messages he exchanged with Ebel in the weeks approaching the murder. Apparently growing increasingly distressed as he adjusted to life outside his solitary confinement cell, Ebel stated in one message that he felt “peculiar,” adding that he knew of no other “remedy” for this other than violence. —Lisa Dawson

The California hunger strike and Evan Ebel’s rampage have shed light on the solitary confinement problem in American prisons. Citizens are now starting to realize that how we treat our prisoners directly affects them since most will be released, with a direct correlation between prisoners released who return to crime and their treatment while in prison. Common sense proves that the more ignorant and angry a released prisoner is, the more likely it will be that he/she returns to crime.

Prison officials argue that solitary confinement is needed for the “worst of the worst” but when investigated, those claims are found false almost every time. It has become the modern day mental hospital even though it’s known to increase the symptoms of mental illness and a place to house those who break petty prison rules such as having too many stamps. Less than 25% of the inmates housed in solitary confinement in the Colorado Department of Corrections were accused of any institutional violence.

Humans need social interaction and sunlight but can be denied both for years in solitary confinement, resulting in serious issues that may become permanent. Add that to the psychological effects that manifest from having too much time to think in an environment where the guards have complete control of all basic necessities. Absolute power absolutely corrupts and it becomes a daily fight just to get food and toilet paper.

The data collected from experts speaks for itself but I prefer to give a personal account of how I suffered while in solitary confinement for eight years at the Colorado State Penitentiary (CSP). Prior to this, I was a very social person, preferring time spent around people but now have to consciously force myself to leave the house. A year removed from prison and that hasn’t changed.

Being treated as sub-human and forced to act out just to get basic necessities created a deep rooted hatred that hasn’t gone away; I just choose to use it to fuel progress since the best revenge for those who tried to break me is success. I was poked with a stick for years but refuse to bite; tortured and punished for studying, now working to overcome the demons.

After my interview with local news stations, my parole officer asked me if “torture” was too strong of a word. I responded with my story about when prison staff had me strip celled for 24 hours in a cold cell that had someone else’s puke and piss all over the floor. I was stripped of clothing but shackled for the first four hours even though I had no access to people and had to exercise for warmth while the shackles dug deep into my ankles. Eventually I had to take a bowel movement but was denied toilet paper and soap, yet forced to eat with my bare hands. It was too cold and bright to sleep, the sleep deprivation tactics increasing the emotional suffering. I ended my story with a question, “is ‘torture’ too strong of a word”?

During solitary confinement I had too much time to think which increased the anxiety I already had as a result of the Type 2 Bipolar Disorder CSP staff already diagnosed me with towards the beginning of my stay, yet they decided to keep me in there for eight more years despite solitary confinement being known to exacerbate the symptoms of mental illness. Anxiety turned to Obsessive Compulsive Disorder (OCD) and I became obsessed with whatever my brain became locked on, even petty things such as labels facing forward. Eventually, I became plagued with homicidal nightmares but the bad part was they didn’t bother me; I was slowing turning into a monster and didn’t know how to handle it. The last six months in there, I was constantly breaking out in cold sweats but even my psychologist didn’t have any answers. Then, the first day in the sun, it immediately stopped but memory of the misery they inflicted will always haunt me.

My first week out of prison was the toughest time of my life. After being used to a thin mattress, noise and constant light; a dark and quiet room with a Tempur-Pedic mattress was too much, making sleep impossible. Food wouldn’t digest correctly and I panicked around people. However, the worst part was the fact that I had learned to embrace misery so positive emotions were too much to handle. I was in a state of shock for a week then would burst out crying over the smallest positive situations. I didn’t know how to be happy and that was a scary thought.

I was plagued with panic attacks brought on by anything that reminded my subconscious of where I had been, except my flight or fight response was all backwards. Rather than wanting to flee, I’d want to attack, and those urges would last all day. It was hard enough to adjust but this made it nearly impossible. To top it all off, the years spent in isolation had destroyed my immune system so I was sick more than I was healthy the first nine months after my release. I can’t imagine how I could’ve survived without my family’s help.

The million dollar question is: Is this how we want prisoners released? I struggled to make it even with every resource made available to me by my loving family but most prisoners don’t have that and stand no chance of success if released from solitary confinement. When they panic, how do you think they’ll react? Should we continue as-is or increase safety for society? You can’t keep them locked up forever, so safety requires humane treatment. It’s your choice.

3 thoughts on “Voices from Solitary: Is "Torture" Too Strong of a Word?”