Voices from Solitary: "Finally Out and Among the Living" 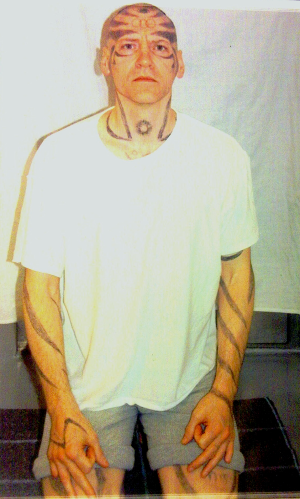 Jack Powers, who spent more than a decade in extreme isolation in ADX. Self-mutilation is common among individuals held in long-term solitary confinement.

This essay by John Jay Powers was published by the Colorado Independent, with the following introductory note by editor Susan Greene. Greene has corresponded with Powers for years, and included him in her multimedia investigation of solitary confinement, The Gray Box.

“Jack Powers is an inmate in the federal Bureau of Prisons convicted of bank robbery and escaping from prison. He spent more than a decade in extreme isolation at the ADX where he amputated his fingers, earlobes, a testicle and his scrotum. He has tried several times to commit suicide. ‘The world outside is like another planet,” he wrote from ADX. “I feel like I am trapped within a disease.’ Powers is a plaintiff in a civil rights lawsuit against the federal government regarding its use of longterm solitary confinement for the mentally ill. – S.G.”

After 12 long, hard years at the ADX Control Unit Supermax Prison in Florence, Colorado, I’m finally out and among the living. Oh, I’m not on the streets. I’m here among the general population of a federal penitentiary in the dry and dusty desert of Tucson, Arizona.

For a guy who has lived alone in a cement box for more than a decade, the transfer here was really something. First there was a bus and then air-service called “Con-Air” – big passenger jets flown around the U.S. by the Marshalls Service. I had the opportunity to speak with other prisoners and see a couple of cities both from land and air. It was a trip for me for sure.

When we pulled up at the pen, I was all prepared to go straight to the segregation where, once again, I’d be put into solitary confinement. Instead, a number of prison officials met me inside the door and told me that I’d be going directly into the population – into the best unit, in fact, where I’d have single cell. I was so shocked by this turn-around that I began to shed tears.

After being alone in a tiny space for so many years, I had adjusted to a kind of self-sufficiency. My eyes had adjusted to seeing things only up close. To be trusted to be around other people without handcuffs, leg irons and belly chains was incredible. I kept waiting for someone to tell me to place my hands behind my back and turn around. But nobody did. Suddenly, I was a regular prisoner in a regular prison. To most people I figure may be reading this, I realize it may not sound like great fortune. But to me, it’s big luck to be back among the living.

Still, now free to walk and talk among other prisoners, I’m starting to notice the effects that solitary confinement had on me. The noise and movement all around me is disconcerting. My conversational skills aren’t that good (as if they ever were) and I’m talking too slowly and pausing too often to gather my thoughts. If someone came up behind me, I’d jerk around to assess whether he meant harm. If somebody clasped my shoulder, I might whirl around and strike him because I’m not used to being touched, especially in a friendly way.

And there’s another thing. Because I have tattoos on my face and head that make me look like an avator/avatar, I get a lot of looks. My appearance makes other prisoners wary of me. They ask where I had come from – what joint. And when I tell them, they shake their heads knowingly. They understand that I’ve been damaged.

The years I spent at ADX have taken their toll in ways I couldn’t have expected.

Like the first night here in Tucson when I tried to play basketball in the rec yard. I could dribble all around. But when I tried to take a shot the ball felt like a brick. Actually, a cinder block. The years I spent playing in my cell with a sock as my ball and a paper rim taped by my wall had destroyed my actual skills.

Same thing when I tried to play the guitar. I amputated my fingers while at ADX. They can no longer work strings to make music. And I have no confidence that I’ll ever play again.

What I can still do is write. And so I put these words onto paper, hoping that the experience of coming out of long-term solitary is something even people who’ve never spent even a day behind bars could find interesting.

Everything seems surreal. It’s like I am dissociated, floating around in a fog, observing this new world from an emotional and psychological distance. In the chow hall, everyone sits in sections according to race and affiliations. It is segregated by the prisoners themselves. But I can go to any table and sit down and no one objects because they understand that I am no one and everyone at the same time. They know by the way I look and by the way I carry myself and by what they have already heard about me. They realize I carry some burden that was born from pain. Some of them offer me extra food, even by silently placing it next to my tray. One man offered two sugar cookies that I concealed in my sock. I got back to the unit unscathed by a shakedown, went into my cell, closed the door and ate them in the dark.

For the most part, the unit I’m housed in is quiet. But whenever the inevitable idiot begins to holler, I get instantly stressed out. After so many years of silence, I long for the quietude. There is something inherently annoying about loud noise that everyone except the noise-maker knows about. As strange as it may sound, I’ve been tempted to pack up my meager belongings and head back to solitary. I feel like mutilating myself again. I feel like committing suicide. But I don’t feel like screaming because that is the worst.

To give credit where credit is due, the lawsuit that was filed by Ed Aro of Arnold & Porter in Denver was the reason for my release from the ADX-Supermax. If not for them and for the Assistant U.S. Attorney Amy Padden in Denver and the editor of The Colorado Independent, Susan Greene, I would still be in a deep, dark hole and likely would not be alive right now. I think they know that a lot of bad stuff happened, and I think they are doing their best to fix it.

All in all, I do not know where I’ll go from here. I will continue my mission to promote “The Manual,” a guide to getting by that I wrote at ADX. I’ll try my best to adjust to this new life with the fewest setbacks possible. And, if anyone wants me to, I’ll write about my experiences again for The Independent. Perhaps the writing itself – and the readership – is my catharsis. I want to be accepted. I want to be normal. I want to be the best human being I can be. But it may just be that I’m forever outside and beyond those possibilities. The intent of injury to my heart and mind is unclear as of yet, and right now I’m somewhat confused.

After wearing pants without pockets for a long, long time, even having pockets is weird. I was just now standing by the door with my hands in my pockets and a guard came by and told me to take my hands out of my pockets. I complied, but then involuntarily went back to doing it – as if each hand needs the tight darkness. It makes sense to me. So much sense that I wonder whether I’ll be sent back to solitary for nothing more than sauntering around with my hands in my pockets.

13 thoughts on “Voices from Solitary: "Finally Out and Among the Living"”