Solitary Confinement: Coming Live to a Computer Near You 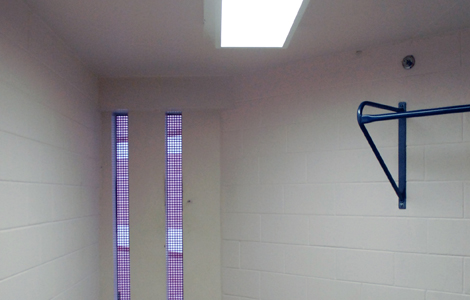 In what its hosts promise will be a “Live Window Into the Solitary Confinement Experience,” three “everyman volunteers” will place themselves in model solitary confinement cells, where the public can watch them on live streaming video. This “experience,” which begins today at 8 a.m., is taking place in conjunction with the upcoming broadcast of “Explorer: Solitary Confinement,” an episode of National Geographic documentary series.

After seeing this subject exploited on Fox’s creepy reality show “Solitary,” and in the UK’s even stranger “Man in Box,” it’s tempting to write this off as another stunt. And certainly, there are elements of phony spectacle– for example, the fact that the inmates in this lockdown unit will be tweeting the entire time. (And then of course, there’s the fact that they’re volunteers who are staying for just a week–if they don’t go nuts and ask to leave sooner.)

That said, the advance materials on the show and the “experience” are reasonably serious and well-informed. They are also surprisingly sympathetic for a mainstream media project in a country that rarely shows anything close to compassion for its prisoners, regardless of the tortures they might endure. So we are keeping an open mind. Here’s a portion of the press release:

Alone in a cell for years or even decades, more than 80,000 Americans are estimated to be in solitary confinement.  Cut off from human contact in an 8 x 10 cell:  Some say solitary is the only way for correctional officers to safely handle the worst prisoners, but others claim it amounts to psychological torture.  In an age when we are all hyperconnected, when rapid-fire interpersonal communications are routine, what’s it like to be suddenly cut off from social contact and experience the claustrophobic isolation of solitary confinement?

On April 2, three volunteers will open a window into that experience when they occupy re-creations of solitary cells constructed in the greater Washington, D.C., area for up to one week.  They will inhabit 80-square-foot “cells” with a sink, toilet, bed, desk and chair.  Initially, the contents of each cell will replicate the “lowest level” of solitary in many prisons … no TV, no computer or reading material, and minimal human contact–meals are served through a slot in the door; participants are allowed one hour of solitary exercise and a brief shower daily.  Their experiences will be shared in real time via outgoing tweets (they will receive no incoming communications), while a camera in each cell will stream 24/7.

This is not meant to be an authentic replication of punitive solitary confinement, with one profound departure being that participants stay as long as they choose, up to one week, and can opt out anytime.  The intent is to provide an “everyman” perspective specifically into the experience of social and claustrophobic isolation that are key hallmarks of solitary confinement.  The goal is to spark greater conversation on this widely used and controversial penal practice as a complement to the April 11 premiere of Explorer: Solitary Confinement on the National Geographic Channel.

The promo on the National Geographic Channel web site describes the episode this way:

Explorer looks at the science of solitary and discovers what it means to be absolutely alone. We go inside Colorado State Penitentiary (CSP) and witness prisoners on the edge and the guards who watch over them. Then, we look at experiments on whether isolation dramatically alters behavior and ongoing new research on how solitary actually could cause long-term mental problems like paranoia, disorientation and delirium.

Colorado State Penitentiary is a good place to view the realities of solitary confinement. It has over 750 inmates in its “administrative segregation” unit–including a number of teenagers serving life without parole for crimes committed as juveniles. And despite a cash-strapped state budget and a falling prison population, Colorado is spending over $10 million to open a new lockdown unit this year.

2 thoughts on “Solitary Confinement: Coming Live to a Computer Near You”