“Man In Box” is a new British reality show, which started streaming live over the web a week ago. Tim Shaw, a DJ and TV presenter known for his outrageous and sometimes offensive behavior,  is spending 30 days in a steel box the size of a large refrigerator, under the gaze of a camera. The public receives clues as to the box’s whereabouts, and whoever finds it gets 30,000 pounds ($46,500).

While the number may be miniscule compared with U.S. figures, the UK does place inmates who present “disciplinary problems”–including some who are mentally ill–in long-term lockdown. And the country has had it’s share of scandals involving places like ancient Dartmoor Prison, where the chief prison inspector once found inmates living in conditions “more appropriate for dangerous animals.”

Despite this, the promoters of “Man In Box” don’t hesitate to call their stunt “an experiment that links solitary confinement with social networking. Observing how a human being behaves for a period of a month in a world of total isolation.” 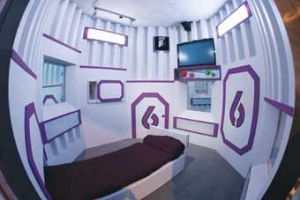 The British are not alone in making solitary confinement into a game show. In the United States, where up to 100,000 inmates may be in lockdown on any given day, the Fox Reality Channel debuted in 2006 with “Solitary.” Now in its fourth seasaon, the show is promoted as “an intense psychological experiment,” in which contestants are confined to small “pods,” where they remain for up to 12 days. The one who sticks it out the longest wins a mere $50,000. While in their pods, the subjects are commanded by a disembodied voice to perform tasks that sometime meet the definitions of torture.

The Boston Globe’s Mark A. Perigard called “Solitary” a “cheap, depraved show” that was “torture for subjects and viewers,” and asked, “What, no waterboarding?” Other than this, it gleaned little media attention or criticism, outside of one 2008 article in Mother Jones, where Michael Mechanic wrote:

When Solitary was in development, Abu Ghraib was still a fresh wound, and they treaded carefully, nixing direct references to prisons, cells, inmates, and above all, the t-word. But hey, controversy sells. “You want to get the tailwind of the whole cultural zeitgeist,” [series creator Andrew] Golder says. “We wanted people to be aware of us and think we were this scary—’torture’ is never a word we’d say—but sort of very tough television show.”

So on the Fox Reality channel, creating a TV show that echoes real-life, government-sponsored torture, is catching the “tailwind of the whole cultural zeitgeist.” This clever feat might not be appreciated, of course, by men who have spent up to 30 years in 6 x9 cells.

In another strange twist to this story, the winner of America’s first big reality TV show spent some time in actual solitary confinment. Last December the ACLU of Massachusetts petitioned the court on behalf of Richard Hatch, who won the first season of “Survivor” series in 2000. In 2006, Hatch was convicted of tax evasion for failing to report his $1 million winnings, and served two years in prison before being released into home confinement. But Hatch was soon back inside–and briefly in solitary confinement–after giving unauthorized interviews to the press (which the ACLU argued violated his First Amendment rights).