Children in Lockdown: Solitary Confinement of Teens in Adult Prisons

In large part, this grim reality is simply a symptom of the American criminal justice system’s taste for treating children as adults. A study by Michele Deitch and a team of student researchers at the University of Texas’s LBJ School found that on a given day in 2008, there were more than 11,300 children under 18 being held in the nation’s adult prisons and jail. According to Deitch’s 2009 report From Time Out to Hard Time, “More than half the states permit children under age 12 to be treated as adults for criminal justice purposes. In 22 states plus the District of Columbia, children as young as 7 can be prosecuted and tried in adult court, where they would be subjected to harsh adult sanctions, including long prison terms, mandatory sentences, and placement in adult prison.” These practices set the United States apart from nearly all nations in both the developed and the developing world.

Documentation on children placed in solitary confinement in adult prisons is spotty. But the cases of several teens in long-term lockdown have been featured in recent reports on kids sentenced to life without parole (another uniquely American practice, addressed in an earlier post.)

According to a 2005 report by Amnesty International and Human Rights Watch, teenagers in adult prisons often end up in solitary, either because they are considered disciplinary problems, because they feel compelled to join prison gangs, or because they have to be isolated from adult offenders “for their own protection.” An administrative officer at the supermax Colorado State Penitentiary (CSP) who was interviewed for the report believed the behavior that lands kids in solitary is often defensive:

One [factor] is age—when you come in at a young age with life without, there’s not a whole lot of light at the end of the tunnel. Also, it’s kind of a guy thing: the young ones come in with a lot of fear, anxiety, paranoia, and they want to make a name for themselves—so they have a tendency to act out. And if they are part of a gang, they are almost required to act out . . . They say [to themselves] “I’ve got to impress everyone with what a bad-ass I am.”

The PBS “Frontline” documentary When Kids Get Life focuses on five children in Colorado who were among 45 juveniles serving LWOP in the state in 2007 . Among them is Andrew Medina, convicted in 1999, when he was age 15, of taking part in a botched carjacking that led to murder.  He is in solitary confinement at CSP, where he was interviewed in 2004 by Human Rights Watch. As reported on the “Frontline” web site:

For unclear reasons, Andy, who has been in prison for nearly eight years from the time of his first arrest, is now jailed at the Colorado State Penitentiary, the state’s “supermax” high-security prison. Andy was transferred to the supermax roughly a year after his sentencing, when prison officials claimed he was the leader of a gang that had started a riot.

Andy explained the sequence of events as best he understands them to Human Rights Watch: “They were doing a routine shakedown of our cell. … I guess they found some contraband, … so they end up giving me twenty days punitive [solitary confinement]. I was getting ready to go back in the population. … All the beds were filled up so they were waiting for somebody to get in trouble, go to segregation, before I could go back out there. Then out of the blue, I’m ready to go, and they serve me … papers saying, we got confidential information that you’re involved with this security group [gang]. … I didn’t understand, you know? It just came out of the blue.”

Andy’s lawyer says he has no tattoos or gang symbols and that it’s ludicrous to think that a teenager could head a prison gang. But when Andy sent a letter asking to involve his lawyer in a review of the transfer decision, he was told no private counsel are permitted to intervene in the process and that its proceedings are confidential.

The state says Andy has not made enough progress to transfer back to a lower-security prison. Over the course of more than four years in the supermax, his lawyer says he’s developed twitches and become demoralized. Andy’s mother lamented the limits imposed on their visits: “I can’t hug him or give him a kiss on the cheek or buy him a pop or a snack or anything, no. He’s alive, but it feels like he’s not,” she told “Frontline.” 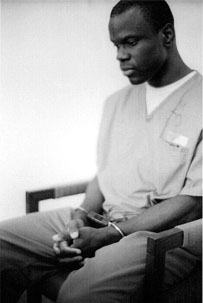 Ian Manuel in 2007, after more than 15 years in solitary for a crime committed at age 13. Photo by Glenn Paul from “Cruel and Unusual.”

Some children have entered lockdown when they were even younger than Andrew Medina. A 2007 report from the Equal Justice Initiative, Cruel and Unusual: Sentencing 13- and 14-Year-Old Children to Die in Prison, described the case of Florida prisoner Ian Manuel, who was “raised in gruesome violence and extreme poverty,” raped by a sibling at age four. “When Ian was 13,” the report continues, “he was directed by gang members to commit a robbery. During the botched robbery attempt, a woman suffered a nonfatal gunshot wound and a remorseful Ian turned himself in to the police. Ian’s attorney instructed him to plead guilty and told him he would receive a 15-year sentence.” Instead, he was sentenced to life without the possibility of parole.

Ian Manuel was also featured in a powerful article by Meg Laughlin, published in 2006 in the St. Petersburg Times, on solitary confinement in Florida, which has the nation’s highest percentage of prisoner’s in lockdown. Laughlin wrote about the nearly 15 years Manuel had spent in lockdown.

Now 29, Manuel has spent half his life in a concrete box the size of a walk-in closet. His food comes through a slot in the door. He never sees another inmate. Out of boredom he cuts himself just to watch the blood trickle. Attorneys who advocate on behalf of prisoners call Manuel “the poster boy” for the ill effects of solitary confinement….

In 1991, when Manuel arrived at the prison processing center in Central Florida, he was so small no one could find a prison uniform to fit him, Ron McAndrew, then the assistant warden, recalled. Someone cut 6 inches off the boy’s pant legs so he would have something to wear. “He was scared of everything and acting like a tough guy as a defense mechanism,” said McAndrew, now a prison and jail consultant in Florida. “He didn’t stand a chance in an adult prison.”

Within months, Manuel was sent to Apalachee Correctional Institution in Jackson County, which McAndrew called “one of the toughest adult prisons in the state.” At Apalachee, the boy mouthed off to other inmates and correctional officers and made obscene hand gestures, racking up disciplinary infractions that landed him in solitary.

On Christmas Eve 1992, he was allowed to make one phone call. He called Debbie Baigrie, the woman he had shot. “This is Ian. I am sorry for all the suffering I’ve caused you,” she remembers him saying. They began to correspond regularly. Baigrie said she was impressed with how well he wrote.

She asked prison officials to let him take the General Educational Development test and take college courses. “I got a second chance in life. I recovered and went on,” Baigrie said. “I wanted Ian to have the same chance.” But the rules of solitary forbade Manuel from participating in any kind of self-improvement or educational program. Instead, he sat in his cell day in and day out, without reading materials or human interaction, racking up more infractions for “disrespect,” which only extended his time in solitary.

After several years, Baigrie gave up. “Not because of Ian,” she said, “but because the system made it impossible for him to improve. What does it say when a victim tries to do more for an inmate than the very system that’s supposed to rehabilitate him?”…

“It’s my belief,” [Manuel said at a federal court hearing], “that the reason I haven’t been able to progress off CM (close management) all these years is the way the system is set up. One DR (disciplinary report) will keep you there for six months and those six months add up to years and those years turn into decades.” In the past seven months, prison records show Manuel received three disciplinary writeups: one for not making his bed, another for hiding a day’s worth of prescription medicine instead of taking it, and yet another for yelling through the food flap when a correctional officer refused to take his grievance form. Those reports extended his stay on the strictest level of solitary for nine months.

Manuel told the judge that in isolation he has become a “cutter,” slicing his arms and legs with whatever sharp object he can find – a fragment of a toothpaste tube or a tiny piece of glass….In the past year, Ian Manuel has attempted suicide five times. In late August he slit his wrists. A prison nurse closed the wounds with superglue and returned him to his solitary cell. When the judge asked him why he attempted suicide, Manuel said, “You kind of lose hope.”

24 thoughts on “Children in Lockdown: Solitary Confinement of Teens in Adult Prisons”