Ask Shamu: The U.S. Tortures Both Human and Animal Prisoners 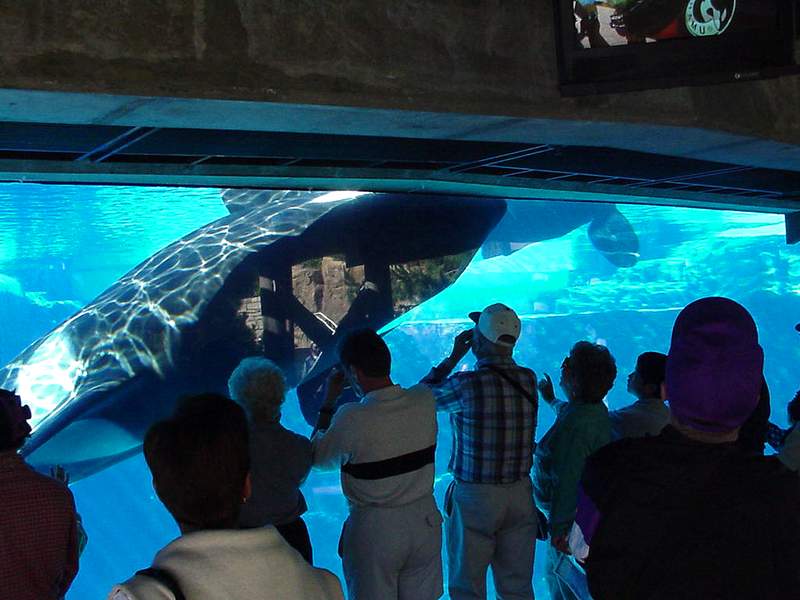 The terms “torture” and “solitary confinement” have surfaced over and over again in articles and commentaries about Tilikum, the captive killer whale who drowned his trainer at Florida’s SeaWorld last month. For the most part, the authors of these pieces have sought mercy for Tilikum. While the six-ton orca had been implicated in two previous human deaths, they argue, Tilikum’s torturous life in capitivity rendered his behavior understandable, however horrific its results may have been.

Many of Tilikum’s defenders highlight the rare intelligence and sensitivity of orcas and other dolphin species. And by way of mitigating circumstances, they point to his tragic youth, in which he was forcibly ripped from his family and community, and to the lonely and restricted life he has lived ever since, released from isolation in his tank only to perform or to breed.

Tilikum’s idyllic life came to an abrupt halt in November 1983 at the age of 2, when he was snatched from his mother and siblings off the coast of Iceland—a traumatic experience for any young orca. For the next 28 years, he learned to perform tricks for food in a confined “ocean” measured in feet instead of fathoms, circling endlessly with an artificial family… Holding a highly social creature in solitary confinement for decades and asking him to perform repetitious stunts in unnatural surroundings seems cruel.

One of the more compelling opinions of the SeaWorld tragedy came from Psychology Today contributing writer Gay Bradshaw, Ph.D. She specializes in human-animal relationships and trauma recovery… Bradshaw believes after suffering a violent and premature separation from his mother, Tilikum’s diagnosis conforms to post-traumatic stress disorder (PTSD). “Tilikum suffered shock and relational trauma from the capture, disrupted development and chronic stress during imprisonment for three decades,” she writes.

Even legendary marine explorer Jacques Cousteau weighed in years ago, stating “There’s about as much educational benefit studying dolphins in captivity as there would be studying mankind by only observing prisoners held in solitary.”

The solitary confinement metaphor was also used by John Crisp in a piece for Scripps Howard news service. “Since killer whales live in intergenerational matriarchal pods,” Crisp wrote, Tilikum’s capture “removed him from ‘family’ and confined him with ‘strangers.’ Since he’s an instinctual swimmer, hunter, and breeder, designed for traveling great distances at sea, even his 3.2-million gallon tank must take on the approximate proportions of a solitary confinement cell.” 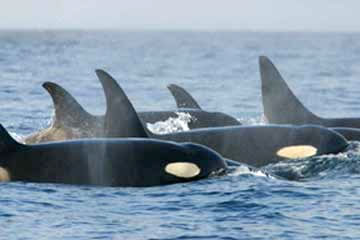 Some commentators took thinks a step further, suggesting that Tilikum’s environment, rather than his nature, led to the recent tragedy.  In Britain’s Daily Mail, marine biologist and filmmaker Martha Holmes, who has filmed orcas in the wild, wrote that they are “extraordinarily social creatures; like human beings they need company. You normally find them swimming in close-knit family groups…Take away that vital social network…and you’re taking away one of the absolute cornerstones of a killer whale’s life. It’s like placing a human being in solitary confinement–for life. It probably has the same consequences, too.” One Canadian blogger concurred: “If a human being was put in solitary confinement for nearly 20 years,” Charlie Smith wrote, “he or she might feel a little homicidal toward the guards.”

The Orlando Sun-Sentinal pointed out that “researchers have yet to find evidence that an orca in the wild has ever killed a person. But they aren’t surprised that the world’s biggest, most powerful and possibly smartest predator, captured and kept for years in a tank, cut off from the influences of an extended family, could have a fatal encounter with a human.” The article quoted Lori Marino, a neuroscientist who has studied orcas: “Living in a tank and having to splash people with your tail every day for 27 years would make anyone go nuts,” she said.

Certainly, solitary confinement constitutes abject cruelty for killer whales (or chimps, or elephants, or any wild animals), and might well drive them to erratic or destructive behavior. But it’s rare to hear such expressions of sympathy or absolution for the tens of thousands of human beings who live in solitary confinement in the United States. Like Tilikum, many of these human prisoners did not kill until they were incarcerated; many more have not killed at all, and are held in isolation for   disciplinary infractions, because they are mentally ill, or because they need “protective” custody.  They can remain there for years or even decades. And the devastating psychological effects of long-term lockdown–which is deemed to be torture by virtually everyone who has experienced it–are well documented.

Among all the pieces we read about Tilikum, only Kieko Matteson’s on Counterpunch pointed to the plight of other “violent offenders” in the state of Florida, which has a large and punitive prison system even by U.S. standards. In the cleverly titled “Habeas Porpoise,” Matteson, an environmental historian at the University of Hawai’i, writes that many observers “have highlighted the cruelty of spending one’s lifetime in a cramped pen and suggested that in light of its incarceration, the cetacean’s actions were ‘only natural.'” She continues:

Strikingly absent in the outpouring of public compassion for Tilikum…is acknowledgement of the comparable effects of lifelong incarceration for Florida’s unfree human denizens. According to a 2009 report by the Sentencing Project, more than 140,000 people in the U.S. are serving life sentences without parole. Over 6,000 of them are in Florida. And, perhaps most striking of all for the state that serves as home to some of the nation’s most widely revered family-friendly attractions–the land of Disney World, Epcot Center and, yes, SeaWorld–the Sunshine State leads the country in the number of juveniles serving life without parole (LWOP) for crimes in which no one was killed. Like Tilikum, these young offenders–77 in all, out of the 100 LWOP juveniles serving time nationwide–live in cramped, stressful conditions, are regularly subject to pressure for unconsensual sex, and face the likelihood of permanently severed ties from their families.

To be sure, their actions, including rape and armed robbery, were reprehensible. But neither were they murderous. In contrast to the benefit of the doubt shown Tilikum…who was given second and third chances to interact with humans long after even his corporate managers recognized him as dangerous, the state’s non–lethal juvenile offenders are imprisoned without hope of release on the basis of their potential threat to society.

The U.S. Supreme Court is expected to rule this spring on whether LWOP for juveniles violates the Constitution’s ban on cruel and unusual punishment. But whether they are serving life or not, children in adult prisons–some of them as young as 12 or 13–very often end up living in effectively permanent solitary confinement.

Like Tilikum, many of these child offenders suffered terrible abuse and trauma in their earlier lives. Unlike Tilikum, they are more likely to respond to their miserable situations by killing themselves than by killing others. And in contrast to the widespread sympathy expressed for the captive orca, the public doesn’t seem to care much about them at all.

4 thoughts on “Ask Shamu: The U.S. Tortures Both Human and Animal Prisoners”