The Canadian papers have been reporting on a growing public outcry–and now, a court petition–against the solitary confinement of an elephant named Lucy in Edomonton’s zoo. According to yesterday’s Toronto Globe and Mail:

Far from the green tropics that are her natural habitat, Lucy the elephant is being kept in cramped and cold conditions that amount to solitary confinement, a court application alleges. Prominent Toronto lawyer Clayton Ruby brought forward the application yesterday on behalf of Zoocheck Canada and People for the Ethical Treatment of Animals in an attempt to free Lucy – a 34-year-old Asian elephant – from the Edmonton Valley Zoo.

They accuse the City of Edmonton, which runs the zoo, of violating animal protection laws by keeping Lucy in a confined space, isolated from other elephants, in conditions they say are cruel. “Because of the condition that she’s been kept in for all these years by the City of Edmonton, various illnesses have been created,” Mr. Ruby said. “They’ve created a sick elephant.” 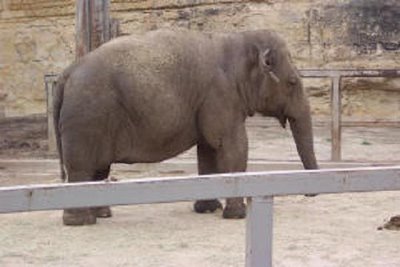 Similar protests have been going on for two years over the sad fate of Lucky, the only elephant in San Antonio’s zoo. According to a press release from the group in Defense of Animals, issued in November:

This week marks the two-year anniversary of Lucky’s solitary confinement, following the death of her companion Alport. The San Antonio Zoo has refused to send Lucky to a sanctuary, and has repeatedly stated its intention to bring in another Asian elephant, even though its future plans are to display African, and not Asian, elephants. Lucky and any companion the zoo acquires will be shipped off to destinations unknown when construction on the new elephant exhibit begins.

On Monday [November 2], In Defense of Animals (IDA) filed a complaint with the U.S. Department of Agriculture, charging that the San Antonio Zoo is in violation of federal animal welfare laws due to its deficient elephant display and for keeping Lucky alone, which is traumatic for this profoundly social species. The complaint followed a scathing report released by the Zimbabwe Conservation Task Force concerning a variety of animal welfare problems at the Zoo.

While conditions in cramped zoos are generally miserable for elephants, these cases are singled out because of the special suffering that comes with isolation. Elephants are increasingly understood as highly intelligent and sensitive beings, on a par with dolphins and whales, and perhaps even with primates. They are also highly social creatures who form close families that can only be separated by death or capture. All of these characteristics make solitary confinement particularly torturous for them–just as it is for humans.