People held in Illinois prisons will receive an improved level of mental health care in coming years, thanks to a major class action settlement in late December.

In the case of Ashoor Rasho v. John Baldwin, the Illinois Department of Corrections agrees to:

The lawsuit alleged that mental illness in Illinois prisons is “chronically underdiagnosed and undertreated,” compromising prisoners’ constitutional rights. Those affected are “subjected to brutality instead of compassion…are mocked and abused by correctional staff, sprayed with caustic chemicals and derided for their illness.” It also stated that prisons lack necessary health care staff and facilities, and that individuals with mental illness are often punished for their condition, including in segregation.

Alan Mills, Legal Director of Uptown People’s Law Center, which coordinated the case, said UPLC started looking into the state of mental health care in Illinois prisons around 2005. When supermax Tamms Correctional Center closed in 2013 at the urging of groups like UPLC and Tamms Year Ten. Mills said its mentally ill individuals held at Tamms were subsequently scattered throughout the system. “A lot of them ended up in segregation, and some in other quasi-specialized mental health units.” 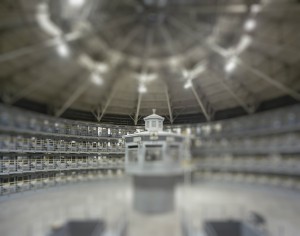 One major part of the settlement will be a new rule requiring people with mental illness who have been in solitary for 60 days to spend at least 10 structured and 10 unstructured hours out of their cells each week. Mills said this will quadruple many individuals’ time out of cell.

Furthermore, those with mental illnesses will be permanently removed from segregation if their reasons for being there are minor offenses, or behavior that was caused by their mental illness in the first place.

Mills is hopeful the out-of-cell requirement will have drastic effects. Studies show that people in solitary confinement develop psychopathologies at higher rates than those in the general population—an effect he has witnessed firsthand. During negotiations for the case, he interacted with some individuals before and after their out-of-cell time increased. “There’s just such a dramatic change in the way that they operate, the way they present, their overall mental health,” he said. “Just getting people out of their cells is so important.”

He hopes the Department of Corrections will notice these positive effects and expand the out-of-cell policy to prisoners without mental illness as well.

In addition to out-of-cell time regulations, three prisons will receive new therapy rooms and other mental health facilities like mental health offices, crisis cells, congregation areas, and pharmacies. A vacant youth prison (the state has dramatically decreased juvenile incarceration) will be converted to a high level mental health care facility for over 500 prisoners. This new capacity is crucial: The Bureau of Justice Statistics reported in 2014 that Illinois prisons were at 150 – 171 percent capacity.

The DOC will fulfill its construction, hiring, and hospital-level care requirements within three years. The time out-of-cell requirement will be implemented within four years, once the necessary facilities and staff are in place.

“While we didn’t get everything that we would have liked in this settlement, we’re starting from such a low standard, that we will see dramatic improvement—assuming, of course, that it’s implemented,” said Mills. “We’re not walking away and declaring victory. We’re very much committed to seeing it through.”

He notes that the DOC has already made positive steps, such as starting construction early at one prison.

In a DOC statement, Illinois Prison Director John Baldwin said that although Illinois prisons were not originally intended to be psychiatric hospitals, the DOC must adapt to the reality of prisoners with serious mental illness. The Department declined to admit liability in the suit’s allegations, but acknowledged that “adequately treating offenders with mental illness will require a shift in departmental operations.”

“We believe that they have a commitment to making these changes,” said Mills. “And I’m hoping that they’ll go even further than what the settlement is. I feel pretty good that they’re actually going to make some changes that will mean something for our clients.”