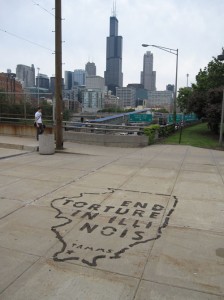 As the new year began, the notorious Tamms state supermax in southern Illinois closed its doors forever. The closure marked the end of a decade-long effort that combined legal and political pressure with press exposes and tireless grassroots organizing. One excellent recap of this effort and its remarkable outcome was published by In These Times, here. Two more can be found on ACLU’s Blog of Rights, here and here. The second piece, quoted below, describes the role played by the men who were buried alive in Tamms.

Put simply, men were sent to Tamms to disappear.

Tamms was sold to the public as necessary to control the “worst of the worst” prisoners in Illinois. Yet when it opened in 1998, the majority of prisoners had virtually no disciplinary history at all. Rather, Tamms was populated by men who had sued the Department, filed grievances, and otherwise complained about illegal conduct by prison officials—wardens were looking for a way to get rid of these headaches. Other men transferred to Tamms had long histories of mental illness—which had never been treated in prison. Many were sent to Tamms because someone had claimed, at some point in the past, that they were gang leaders—even though most had never been found guilty of any gang activity. When the Uptown People’s Law Center challenged the placement of our clients in Tamms, we were told that these men were not entitled to a hearing, and would not be told why they had been sent to Tamms.

Some of these men have spent the last 15 years in complete and total solitary confinement at Tamms.

Tamms officially closes its doors today, first and foremost because the men sent there did not disappear. Rather than buckle under the extreme psychological pressure of solitary confinement, they banded together, fought back, and reached out and educated and organized their families and friends…

Like other “supermax” facilities, Tamms was designed to ensure that prisoners could be housed in complete isolation—never coming in contact with another prisoner, and only rarely coming in contact with staff. There is no dining hall; there is no chapel; there is no library; there are no classrooms; there is no yard. Breakfast, lunch and dinner are brought to prisoners in their cells—passed through a slot in a steel door. Medical and mental health care is generally provided through the cell door—with no privacy, and minimal ability for medical professionals to examine or even conduct a meaningful conversation with the men they are supposed to be caring for.

In a brave act, the men at Tamms initiated a prison-wide hunger strike in 2000. They asked for such simple things as shoes to wear outside that would protect their feet; the right to clean their own showers; and for other activities to productively occupy their time. The vast majority of prisoners refused meals the first day; dozens refused meals for a week; three lasted over 30 days…

Two of the last men out in December, 2012, were also two of the first men to arrive at Tamms in March, 1998. They survived almost 15 years in total isolation. While closing Tamms is a tremendous victory, we cannot forget the terrible price paid by human beings as a result of this 15 year experiment in torture.

For more background, see “Trapped in Tamms,” the groundbreaking series published in the Belleville News-Democrat, as well as our earlier piece on Tamms in Mother Jones.