In Canada, a Death in Prison Sparks Debate, Lawsuits Over Solitary Confinement 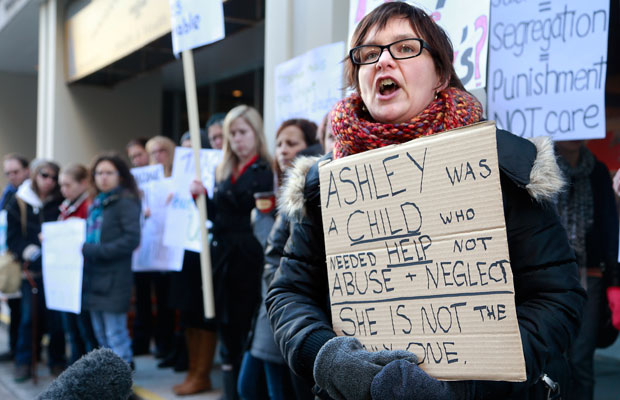 Protesters outside the headquarters of the Correctional Service of Canada in Ottawa in January 2013. Photo: Julie Oliver/Ottawa Citizen

Ashley Smith was just 19 when she died in her solitary confinement cell at the Grand Valley Institution for Women in Kitchener, Ontario, in October 2007. As she had many times before, Smith tied a ligature around her neck and tightened it. For twenty long minutes, a crowd of prison guards stood watch from outside her door, waiting and filming as her face turned a purplish-black. By the time they entered Smith’s cell, it was too late to save her. Smith had spent more than 1,000 days in isolation.

Six years later—in December, 2013—a Coroner’s Inquest determined that her death constituted a homicide. This past December, the Canadian government issued a formal response to the inquest, refusing to put in place many of the jury’s 104 recommendations. This move has sparked a national debate in Canada about the use of solitary confinement. Two lawsuits, both filed since the government released its response, allege that the Correctional Service’s use of isolation amounts to cruel and unusual punishment.

Ashley Smith’s encounters with the law and state services began when she was a young teenager. She cycled in and out of secure youth facilities after her first arrest at 15, for throwing crab apples at a postal worker. Once she aged out was sent into the adult system, Smith’s life took on a new degree of instability; she was transferred 17 times during the course of her 11 months in federal custody in order to accommodate “administrative issues such as cell availability and staff fatigue. Smith also received inconsistent mental health care despite demonstrating self-injurious behavior and voicing suicidal ideation.

After Smith’s death, the warden and four correctional officers directly involved in the incident were fired, and the officers were charged with negligent homicide. The charges were subsequently dropped, however, and all four COs were eventually reinstated to their positions. Union representatives insisted that the COs had been scapegoated by senior management, who had allegedly given direct orders for the guards to ignore Smith’s behavior, and not intervene as long as she was still breathing.

Although Smith died of self-strangulation, a coroner’s jury later ruled the incident a homicide, determining that she could not be held responsible for what happened. Coroner’s inquests are formal court proceedings in which a five-person jury hears from witnesses and determines the facts of a death, but without establishing guilt or fault. In Ontario, where Smith died, it is mandatory to hold a Coroner’s Inquest for all individuals who pass away in the custody of the Correctional Service.

The jury also put forward a series of recommendations for the Correctional Service of Canada, including stringent caps on the amount of time individuals can spend in isolation and a complete abolition of “indefinite solitary confinement.” Nearly a year later, in December 2014, the Canadian government published its formal response. They asserted “that the government is unable to fully support [the inquest’s recommendations] without causing undue risk to the safe management of the federal correctional system.”

The government also refuted the inquest’s characterization of segregation practices. “The term solitary confinement is not accurate or applicable within the Canadian federal correctional system. Canadian law and correctional policy allows for the use of administrative segregation for the shortest period of time necessary, in limited circumstances, and only when there are no reasonable, safe alternatives.”

In an interview with The Canadian Press, one of the lawyers who represented Smith’s family lambasted the government’s refusal to honor the inquest’s language. “They’re playing the Orwellian game…That bodes very poorly for them honestly dealing with this crisis in the system—that they can’t even call it what it is.”

These sentiments were echoed by Ashley Smith’s mother, Coralee. “I don’t see any real changes… segregation is basically going to stay the same.”

Reactions to the Canadian government’s position extend beyond Smith’s family and their legal team. Since December, two separate lawsuits have been filed by advocacy groups alleging that the use of solitary confinement in Canada amounts to cruel and unusual punishment, and is thus unconstitutional.

On January 19, the British Columbia Civil Liberties Association (BCCLA) and the John Howard Society of Canada filed a lawsuit against the Attorney General of Canada, arguing “that the solitary confinement regime leads to prisoner suffering and deaths, deprives prisoners of fundamental procedural protections and is discriminatory against both mentally ill and Aboriginal prisoners.”

About one week later, the Canadian Civil Liberties Association and the Canadian Association of Elizabeth Fry Societies filed a similar claim, set to be heard in the Ontario Supreme Court. “Canadian prisons subject inmates to solitary confinement without any limit on duration, without any guarantee of independent review, and without any consideration of the frailties of the inmate,” a Counsel in the petition states in the press release announcing the suit. “The ready, routine and prolonged use of solitary confinement in Canadian penitentiaries is unjustified, unethical, and ultimately, unconstitutional”.

The Surprising Truth About Solitary in Canada

Stories like Smith’s are story all too familiar in the American context. This past December, a Rikers Island corrections officer named Terrence Pendergrass was convicted on a civil rights charge, after a jury found he had ignored the pleas of an incarcerated man with mental illness who had swallowed a toxic soap ball. One officer testified that when he alerted Pendergrass that the prisoner was distressed, he was told, “don’t bother me unless someone is dead.” Jason Echevarria, 25, passed away shortly thereafter.

Most Americans—and Canadians—might be surprised to see any parallels between the conditions of confinement in the two countries. “Canadians tend to think of the U.S. as having a much more hardline approach to criminal justice, and to be harsher to people who are incarcerated,” said BCCLA Counsel Laura Track in an email to Solitary Watch.

“However, current ‘tough on crime’ policies being implemented in Canada, such as mandatory minimum sentences and changes to rules governing parole eligibility, for example, demonstrate a very regressive approach to criminal justice policy in this country,” Track added. About one in four people held in Canada’s federal prison system has spent some time in solitary confinement.

Track and other advocates have contended that the United States and Canada are actually diverging in their use of isolation—with American prisons and jails generally relying less on the practice, but their northern neighbor doing just the opposite.  Over the last five years, the number of federal prisoners in solitary confinement in Canada has increased by 6 percent. Little information on changes to the number of individuals held in isolation in U.S. prisons is publically available, but some evidence suggests the use of isolation is in slow decline. While the ratio of Canadian prisoners in solitary may be high, however, the sheer number remains relatively, due to the much smaller size of the overall prison population. It is estimated at any given time, there are about 1,800 people in solitary confinement in Canadian prisons and upwards of 80,000 in the United States.

Smith’s death also underlined another similarity between the United States and Canada: the ease with which people with mental illness are funneled into prison and then solitary confinement. Fourteen out of 30 suicides in Canadian prisons over the last three years occurred in segregation units—including many by individuals who had a documented history of struggling with mental health issues. In 2010, a 24-year-old with a history of mental illness, Edward Snowshoe, hanged himself after spending 162 days in isolation.

Solitary Watch asked Kim Pate, Executive Director of the Canadian Association of Elizabeth Fry Societies, why so many individuals with histories of mental health issues have ended up in Canadian segregation units. “It is for similar reasons [as in the United States], including the reality that mental health services are even more likely to be inadequate and underfunded than other health issues,” she replied via email. This discrepancy persists despite Canada’s universal, single-payer health care system.

The fallout from Ashley Smith’s death has also revealed some significant differences between the American and Canadian correctional systems, and particularly the relative dearth of avenues available to American families and advocates seeking change.

It was the inquest into Ashley Smith’s deathand the government’s recalcitrant response—that sparked the recent national debate on the use of solitary confinement in Canadian corrections. No parallel system exists in the United States to bring public scrutiny to prison deaths.

Nor does the U.S. federal prison system have an Office of the Correctional Investigator—or Ombudsman—empowered to probe for problems in prison conditions or administration. In Canada, however, all individuals incarcerated within federal penitentiaries can contact the Ombudsman using a toll-free, unmonitored, and unrestricted number to report abuse or lodge complaints. Staff travel to all federal institutions at least once per year, where they meet privately with prisoners and proactively examine particular areas of focus, including segregation. The office has “golden key” access, meaning that staff members can access any record, any person or any place that is under the authority of the Correctional Service of Canada—with legal penalties for noncompliance.

In an interview with Solitary Watch, Sapiers called the government’s response to the Ashley Smith inquest “tone deaf.”

“Much of the response really repeated the testimony that was given by correctional employees of Canada during the inquest,” he said on the phone from his office in Ottawa. “You would very much think that the status quo was okay.”

In addition, both lawsuits moving forward in the Canadian courts allege that isolation violates constitutional protections against cruel and unusual punishment. With a few exceptions, this argument has proven largely futile in U.S. courts.

Solitary Watch asked the BCCLA’s Laura Track why she believes her suit can succeed. “Last year, the Federal Court of Canada found that government cuts to health care benefits for refugees amounted to cruel and unusual treatment,” she said via email. “This was a huge victory for the claimants, and represented an important development in constitutional law, breathing new life into the under-used section 12 of our Charter of Rights and Freedoms.”

“We will have to wait to see what happens on appeal in that case, but it seems to me that depriving vulnerable refugees of necessary health care services should certainly meet the test set down by the Supreme Court of Canada in earlier cases as treatment that is so excessive as to outrage our standards of decency,” she added.

“Prolonged and indefinite solitary confinement meets the test, too.”