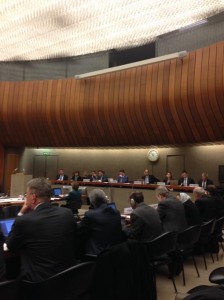 Members of the UN Committee on Torture question a U.S. delegation at a hearing in Geneva last week.

Last Wednesday and Thursday, United States government officials met with representatives at the United Nations to discuss the country’s compliance with the United Nations Convention Against Torture and Other Cruel, Inhuman or Degrading Treatment or Punishment (CAT). Every country that is a signatory to the CAT is required to submit a “Periodic Report” to the UN Committee on Torture outlining its adherence to the Convention, and countries are also obliged to respond to any questions, observations, and recommendations for change put forward by the Committee. The U.S.’s latest Periodic Report was submitted in October (as reported by Solitary Watch here), and last week, U.S. representatives traveled to Geneva to meet with the ten-member Committee.

The Committee on Torture raised a number of issues at the periodic review, including the abuses committed at Guantanamo Bay, violence committed by police forces, conditions in immigration facilities, and solitary confinement. Each day more than 80,000 people held in solitary confinement across the United States, confined to a space the size of a parking space for 22 to 24 hours a day. There are almost no laws that regulate how isolation is implemented on the inside, whether in local, state or federal correctional facilities.

Even before the session began, prisoners’ rights advocates and anti-solitary activists had little reason to hope that the review would be taken seriously by U.S. government officials or correctional authorities. In the report submitted to the Committee last month, U.S. officials stated that there is “no systematic use of solitary confinement in the United States.” In the weeks preceding the Committee hearing, a number of prominent human rights and civil liberties organizations submitted shadow reports disputing the US government’s assertions. (Read them in full here: American Civil Liberties Union; Center for Constitutional Rights, Legal Services for Prisoners with Children and California Prison Focus; American Friends Service Committee, NY CAIC, the Correctional Association of NY, NRCAT, T’ruah, Victorious Black Women, and the Midwest Coalition for Human Rights.)

At last week’s hearing, the Committee Vice-Chairperson, George Tugushi, queried American government officials about what measures were in place to limit the imposition of solitary confinement and whether alternatives were being utilized to avoid prolonged detention. Two other committee members also asked questions about the isolation endured by those locked up in America’s prisons and jails.

David Bitkowe, the Deputy Assistant Attorney General at the Department of Justice, told the Commission that significant progress had been made in addressing the issue of solitary confinement on U.S. soil. He stressed that several states have undertaken reforms in recent years to reduce the use of solitary confinement without compromising prison safety, and specified that U.S. federal courts “have interpreted the Eighth and Fourteenth Amendments of the U.S. Constitution as prohibiting the use of solitary confinement under certain circumstances.” The delegation declined to specify the number of individuals who are currently held in isolation in the United States.

Bitkowe also stated that prisoners were most frequently placed in isolation for their own safety – not for institutional security – and emphasized that solitary confinement was never imposed in order to cause psychological harm. He added that the Justice Department “is continuing to work to prevent, detect and respond to abuse in U.S. prisons.”

In a reference to the Angola 3, an Italian member of the Committee on Torture, Alessio Bruni, said that some some prisoners in Louisiana had been held in isolation for more than three decades. He told the U.S. delegation that the practice of holding individuals in long-term isolation was “leading [prisoners] to insanity” and causing “anxiety, depression and hallucinations until their personality is complete destroyed.”

David Fathi, Director of American Civil Liberties Union National Prison Project, was one of several advocates present at the hearing in Geneva. Afterwards, he responded to the comments provided by Bitkowe and others. “The U.S. government is still in denial,” Fathi told Solitary Watch in an email.  “The idea that it’s not solitary confinement if you can have a radio or receive a letter just doesn’t pass the laugh test.​”

Concluding observations and recommendations will be issued by the UN Committee on Torture on November 28.

One thought on “UN Committee on Torture Questions U.S. Record on Solitary Confinement”