U.S. Government Tells UN: “No Systematic Use of Solitary Confinement in the United States” 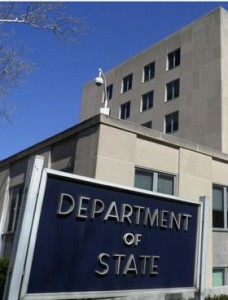 Representatives of “civil society” have been invited to the State Department to comment on a report that says the U.S. does not torture.

Today, dozens of advocates will travel from around the country to Washington, DC, to take part in what are called “Civil Society Consultations” with representatives of the U.S. government on the subject of the United Nations Convention Against Torture and Other Cruel, Inhuman or Degrading Treatment or Punishment (CAT).

As a signatory of CAT, the United States Government is required prepare a “Periodic Report” to the UN’s Committee Against Torture about its adherence to the Convention. In this report, the United States must respond to questions, observations, and recommendations for change issued by the Committee.

The U.S.’s latest Periodic Report, prepared by the State Department and due to be presented in Geneva in November, runs to more than 100 pages. The government addresses 55 separate items raised by the Committee Against Torture, on its conduct in the “war on terror” and also on its civil justice system.

CAT forbids “any act by which severe pain or suffering, whether physical or mental, is intentionally inflicted on a person” for the purposes of intimidation, coercion, forced confession, or punishment, “when such pain or suffering is inflicted by or at the instigation of or with the consent or acquiescence of a public official or other person acting in an official capacity.”

Unsurprisingly, the United States asserts that it is in all cases in alignment with CAT. It’s safe to say that most of the advocates permitted to testify at the State Department today will differ, to some degree, with that assertion. Some have even created “shadow reports” to the U.S. Periodic Report.

In what is pretty clearly a pro forma review process, each of the 21 representatives of “civil society” will have three minutes to address their concerns to members of the U.S. State, Justice, and Homeland Security Departments, who will then have the opportunity to respond. The entire session will take just two hours.

For advocates working on solitary confinement, the key item comes on page 73 of the U.S. Periodic Report. Amid questions regarding the treatment of immigrants, the death penalty, police brutality, and prison rape, item 37 asks the U.S. government to do the following:

The assurances provided by the United States should be read in full, but we are publishing a few choice sections here. For example, the U.S. report insists that the U.S. Constitution, as interpreted by the courts, offers sufficient protection against the ravages of solitary confinement to all people in prison, and especially to children and people with mental illness.

The U.S. Constitution, along with federal and state laws, establishes standards of care to which all inmates are entitled…U.S. courts have interpreted the Eighth and Fourteenth Amendments of the U.S. Constitution as prohibiting the use of solitary confinement under certain circumstances, especially with regard to inmates with serious mental illness or for juvenile detainees. (Specifically, under the Eighth Amendment’s prohibition against “cruel and unusual punishments,” correctional facility administrators may not subject inmates to solitary confinement with deliberate indifference to the resulting serious harms, including suicides, suicide attempts, and serious self-injury. See Farmer v. Brennan, 511 U.S. 825, 843 (1970); see also, e.g., Madrid v. Gomez, 889 F. Supp. 1146, 1265 (N.D. Cal. 1995) (using prolonged solitary confinement on prisoners with serious mental illness can be “the mental equivalent of putting an asthmatic in a place with little air to breathe”)…

People with mental, physical, and psychological disabilities are not punished with solitary confinement, the U.S. reports asserts:

The Americans with Disabilities Act of 1990 (ADA) and the Rehabilitation Act of 1973 (Rehabilitation Act) restrict and regulate the use of solitary confinement for persons with disabilities. Title II of the ADA, 42 U.S.C. 12132, applies to state actors, while the Rehabilitation Act applies to federal correctional facilities and correctional facilities receiving funds from the federal government. Both statutes prohibit the use of solitary confinement in a manner that discriminates on the basis of disability instead of making reasonable modifications to provide persons with disabilities access to services, programs, and activities, including mental health services. See Pa. Dep’t of Corr. v. Yeskey, 524 U.S. 206, 210 (1998).

Likewise, according to the report, children cannot be placed in solitary confinement (or at least, “only as a last resort”:

PREA [Prison Rape Elimination Act] restricts the use of solitary confinement for juvenile inmates and inmates who are the victims of sexual violence. Under implementing regulations, juveniles “may be isolated from others only as a last resort when less restrictive measures are inadequate to keep them and other residents safe, and then only until an alternative means of keeping all residents safe can be arranged.” 28 C.F.R. 115.342. The regulations also set time limits and other limitations on the use of solitary confinement on juvenile inmates. With regard to adult inmates at high risk for sexual victimization, the regulations establish conditions on placement in segregated housing and provide that if such inmates are placed in segregated housing, they are to have access to programs, education, work opportunities, and other services to the extent possible. 28 C.F.R. 115.43(a)-(b).

In fact, there is “no systematic use of solitary confinement in the United States” at all! Not even at the notorious federal supermax, ADX.

As stated in a letter of November 30, 2011, responding to a request from the Special Rapporteur on Torture and Other Cruel, Inhuman or Degrading Treatment or Punishment, “[t]here is no systematic use of solitary confinement in the United States.” Noting that the Special Rapporteur had cited the U.S. Penitentiary, Administrative Maximum (ADX) facility as an example of a facility that places inmates in solitary confinement, the letter provided information including the following:

Security requirements at the ADX mandate restrictive procedures for movement of inmates and physical interaction with staff. For security reasons, inmates in General Population spend most of their day in individual cells. They are not deprived, however, of human interaction. Inmates can speak with (but not touch) one another in the recreation yards, and can communicate with the inmates housed on either side of their cells. The Warden, Associate Wardens, Captain, and Department Heads perform weekly rounds so they can visit with each inmate. Correctional Officers perform regular rounds throughout all three shifts on a daily basis. A member of an inmate’s Unit Team visits him every day, Monday through Friday, except on holidays. Inmates receive regular visits from medical staff, education staff, religious services staff, and mental health staff, and upon request if needed. In addition, General Population inmates are permitted five non-contact social visits per month and two fifteen-minute phone calls. Inmates in less restrictive housing units are permitted even more social visits and phone calls. Inmates can also send and receive personal correspondence.

Virtually everything we have published in the last five years on Solitary Watch refutes these assurances. So do the lives of the thousands of men, women, and children who have been driven to despair, to madness, to self-harm, or to suicide–all by a practice which, according to their government, is neither cruel, inhumane, degrading, or torturous.

17 thoughts on “U.S. Government Tells UN: “No Systematic Use of Solitary Confinement in the United States””