In the Story of Jonah, an Urgent Lesson About the Dangers of Solitary Confinement

The following piece originally appeared in September 2013 in Tablet, and is republished here by permission of the author.  Margo Schlanger is a professor of law at the University of Michigan and the former Department of Homeland Security Officer for Civil Rights and Civil Liberties. She helped to draft the American Bar Association’s Criminal Justice Standards on the Treatment of Prisoners. 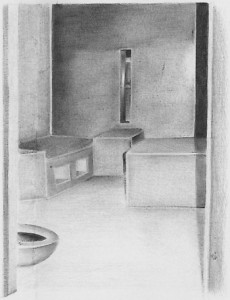 Preparing this year for Yom Kippur, I began to study the Book of Jonah, traditionally read on the afternoon of the holiday, for insight into our country’s current use of solitary confinement. After all, Jonah is perhaps the most famous solitary prisoner of all time. And at first blush it might seem that his (short) stay in solitary—inside a whale—was pretty good for him. It turns out, though, that even Jonah didn’t find redemption in solitary confinement.

The story of Jonah is ancient, but it addresses a topic with real contemporary urgency. At last count, 80,000 American prisoners were locked in solitary confinement. In California this summer, long-term solitary provoked a hunger strike of tens of thousands of prisoners; it ended a week ago, with dozens of prisoners having refused to eat for two entire months, after the California legislature promised hearings. Strikers sought more humane and less isolating conditions—better food, access to sunlight, more individualized decision-making about their continued stay in Special Housing Units. Does Jonah have anything to say about the best response to those demands?

Jonah’s first chapter tells us about God’s call to the prophet Jonah to go to Nineveh—an enormous, distant, and non-Jewish city—and inform the Ninevites of the errors of their ways. But Jonah does not do what prophets do. He does not answer God in words; he does not inveigh or argue. He simply disobeys, running away as fast and far as he can. He hires a ship to Tarshish, at the other end of the Mediterranean. On the ship, too, Jonah declines the prophetic role of speaking to God. As all the sailors cry out to their gods to save them from the deadly storm that threatens, he sleeps. Even when the lots are cast and it is apparent that he is the source of the storm, he explains to his shipmates what is going on but does not deign to pray, or even talk, to God. He has them throw him into the water, and when he is in the water, drowning, again he fails to seek salvation, intercession, explanation.

But then things change, the text tells us: “God appointed a great fish to swallow Jonah; and Jonah was in the belly of the fish three days and three nights. Then Jonah prayed to the Lord, his God, from the belly of the fish.” So we learn from the Book of Jonah the possibility, the aspiration, that stress and discomfort, hopelessness and fear can lead to some kind of redemption. Jonah uses his three days alone with his conscience to good effect. He ends them with obedience in two ways: First, he re-embraces his relationship with God, by calling out in prayer to him. And second, he goes to Nineveh, as commanded.

This episode and text shed light on the modern prison practice of solitary confinement—isolating prisoners alone in a cell the size of a parking space for 23 hours a day, with an hour, still alone, in an “exercise yard” (a shed-sized, ceiling-less room of concrete, open to the sky and elements but often with no ability to see out, except above). Prisoners and their keepers call this kind of confinement “seg” (for segregation) or “the box” or the SHU (Special Housing Unit). The original impetus for seg housing, used by the Quakers in the nation’s first prison, in Philadelphia, was to provide time and occasion for thought and repentance—the very way that the whale’s belly worked for Jonah. Modern prison segregation, however, has a different theory. It’s premised more on ideas about contagion and control; fear that the “worst of the worst” prisoners will harm others if not isolated, and that the just punishment for noncompliance within prison is to make conditions harsher, sentencing offending inmates to a prison within a prison.

So, how does this work, in practice? We learn from countless witnesses, voices from inside solitary confinement, that Jonah’s hope, and his deliverance to a life of purpose, are atypical responses to isolation. How do most people react to isolation, to the modern belly of the whale? Here’s one account, from Cesar Francisco Villa, a California prisoner who has been in solitary confinement for 11 years. What he writes is worth quoting at some length:

Nothing can really prepare you for entering the SHU. It’s a world unto itself where cold, quiet, and emptiness come together seeping into buy xanax san antonio your bones, then eventually the mind.

The first week I told myself: It isn’t that bad, I could do this. The second week, I stood outside in my underwear shivering as I was pelted with hail and rain. By the third week, I found myself squatting in a corner of the yard, filing fingernails down over coarse concrete walls. My sense of human decency dissipating with each day. … My sense of normalcy began to wane after just 3 years of confinement. Now I was asking myself, can I do this? Not sure about anything anymore. Though I didn’t realize it at the time—looking back now—the unraveling must’ve begun then. My psyche had changed—I would never be the same. The ability to hold a single good thought left me, as easily as if it was a simple shift of wind sifting over tired, battered bones.

There’s a definite split in personality when good turns to evil. The darkness that looms above is thick, heavy, and suffocating. A snap so sharp, the echo is deafening. A sound so loud you expect to find blood leaking from your ears at the bleakest moment.

The waking is the most traumatic. From the moment your bare feet graze the rugged stone floor, your face begins to sag, knuckles tighten—flashing pale in the pitch of early morning. The slightest slip in a quiet dawn can set a SHU personality into a tailspin: If the sink water is not warm enough, the toilet flushes too loud, the drop of a soap dish, a cup. … In an instant you bare teeth, shake with rage. Your heart hammers against ribs, lodges in your throat. You are capable of killing anything at this moment. Flash attack; a beating, any violent outburst that will release rage.

This would be the time it’s best to hold rigid. Take a deep breath. Try to convince yourself there’s an ounce of good left in you. This is not a portrait you wish anyone to see. And then a gull screeches passing outside—another tailspin and you’re checking your ears for blood.

And this is a good day.

Some extremely resilient prisoners can survive even long-term solitary confinement with their minds and souls whole, almost unscathed. But for many, perhaps most, isolation—and the featureless, purposeless life that accompanies it—is deeply damaging. Yet today, we impose this state, this harm, on tens of thousands of prisoners. The Michigan prison system has over a thousand prisoners in long-term segregation. In our national experiment of mass incarceration, we are not only imprisoning more people than any nation ever has before—over 20 percent of the world’s current prisoners—we are housing more of them in segregation, for longer periods of time than has ever been attempted. We should be unsurprised if few or none experience Jonah’s positive response.

Let’s move back to Jonah for a deeper look: Jonah learned something in the whale’s belly, but even Jonah’s new-found clarity was far from perfect. He learned obedience but not understanding. Later in the story we find that Jonah is deeply aggrieved, even angry with God. Why? Because when the Ninevites so speedily repented, God relented and went back on the prior promise to ruin the city. Jonah heads outside the city to sit alone—again, solitary if not confined—and stew over this felt grievance. He complains that God is “compassionate and gracious, slow to anger, abounding in kindness, repenting of evil,” throwing those words at God as an accusation, not, as we pray today, as words of hope or entreaty or praise. Jonah is deeply skeptical of mercy and believes only in harsh justice. At the same time, he is psychologically in a very similar place as the prisoner quoted above, enraged and desperate over the withering of the gourd on which he was relying for shade.

God could simply reject Jonah’s views about the world and subject him to punishment for them. Perhaps that punishment would be a harsher or longer term of isolation, as it is so often in prison. But that’s not what happens. Instead, what God rejects is Jonah’s chosen isolation. God ends Jonah’s segregation in the sukkah, the booth he has built, interrupting it with conversation that extolls the quality of mercy—deserved or not, applicable even to the thousands who don’t know their right from left, to the beasts as well as the people. We don’t see or hear Jonah’s reaction, but the tradition subscribed to by most Jewish commenters on Jonah holds that he is abashed and persuaded, that this book is about Jonah’s salvation more than the redemption of Nineveh.

Following that tradition, Jonah’s teshuvah does occur, but not in isolation in the whale’s belly, and not as a matter of justice. Jonah’s teshuvah occurs when God engages Jonah’s humanity to explain to him the ineffable value of mercy and when Jonah understands that just like a child who doesn’t know right from left, good from evil—just like all of us, including our prisoners—he, too, depends on mercy.

One thought on “In the Story of Jonah, an Urgent Lesson About the Dangers of Solitary Confinement”