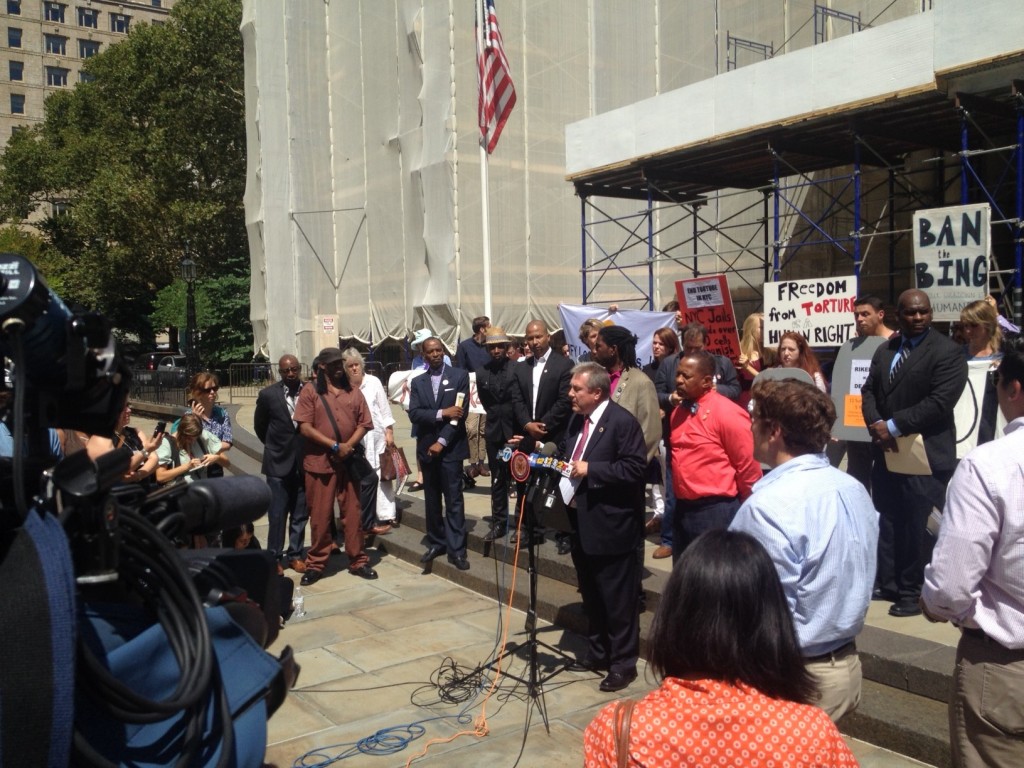 Update, 8/22/14:  On Thursday, August 21, the New York City Council passed legislation introduced by Councilman Danny Dromm of Queens that would require corrections officials to release quarterly reports documenting information about inmates being held in solitary confinement at Rikers Island jail. Presenting this information to the New York City Board of Corrections would create increased transparency and oversight concerning the jail’s use of punitive segregation. The legislation is now awaiting the signature of Mayor de Blasio, who has said he supports the bill.

New York City advocates and public officials gathered on the steps of City Hall on Monday to demand an end to the “culture of brutality” emerging from New York City’s Rikers Island, the second biggest jail in the country. The demand followed recent reports released by the United States Department of Justice and the New York City Board of Corrections, as well as months of investigative reporting by the New York Times, exposing brutality, violence, and excessive use of solitary confinement by officers specifically against mentally ill and teenage inmates. One previously incarcerated advocate that spoke at the event described Rikers as “worse than Dante’s Inferno.”

At the press conference, organized by the New York City Jails Action Coalition, speakers expressed support for legislation introduced by Councilman Daniel Dromm of Queens that would bring about much needed transparency and oversight to Rikers. The bill will be voted on this Thursday in the City Council. Speaking at the event, Dromm recounted his tour of Rikers saying, “I saw the horrible conditions inside of solitary people have to endure—a very small cell, the smell of urine, graffiti, a bed that was rusted, a mattress that had mildew on it, a blower of heat directly on top of the bed blowing down.” Strong criticism of Rikers Island has surfaced most recently after a series of exposes in the New York Times covering the staggering rise in violence at Rikers since 2009.

The Times managed to uncover an internal report conducted by the city’s Department of Health and Mental Hygiene that documented, during an 11 month period, 129 cases of violence by corrections officers towards prisoners yielding injuries so serious they could not be treated at the jail’s clinic. Individuals incarcerated at Rikers suffered fractured jaws and eye sockets, wounds needing stitches, and severe back and head trauma. The report found that 77 percent of those seriously injured had a diagnosis of mental illness. Yet in not one of the 129 cases was a corrections officer prosecuted.  Over half of the 80 prisoners interviewed by health department staff admitted to being intimidated by officers during their treatment, making it easier for staff to cover up the violent episodes.

According to the same article, about 4,000 out of 11,000 people held at Rikers have a mental illness. This number is about 40 percent of the jail population, a 20 percent increase from eight years ago. Few corrections officers have received any in-depth training on how to deal with individuals with mental illness.

Criticism of policies at Rikers Island continued to rise after August 4, when the United States Department of Justice unveiled a secret three-year investigation of Rikers conducted from 2011 to 2013. The investigation concluded that there is a “deep seated culture of violence” at the jail and that the New York City Department of Correction (DOC) has violated the civil rights of adolescent males ages 16 to 18, by subjecting them to and not protecting them from excessive force and violence. For example, the report said, “In FY [Fiscal Year] 2013, there were 565 reported staff use of force incidents involving adolescents… (resulting in 1,057 injuries).”Teenagers at Rikers suffered extreme violence by officers including “…broken jaws, broken orbital bones, broken noses, long bone fractures, and lacerations requiring sutures.”

The Department of Justice (DOJ) report released by the office of Preet Bharara, the United States Attorney in Manhattan, also condemned the use of solitary confinement against adolescents held at Rikers. The report reads: “Moreover, DOC relies far too heavily on punitive segregation as a disciplinary measure, placing adolescent inmates—many of whom are mentally ill—in what amounts to solitary confinement at an alarming rate and for excessive periods of time.”

While New York State prisons, under pressure from a lawsuit by the New York Civil Liberties Union, recently placed strict limits on the use of solitary confinement for juveniles under the age of 18, that reform does not apply to city jails. However, almost a year ago last September, the New York City Board of Corrections, the body that oversees the city’s jails, voted to draft new specific rules and criteria on who can be placed in solitary on Rikers Island. The Board is especially concerned with the use of solitary confinement on adolescents and people with mental illness.

In addition to a climate of brutality and violence at Rikers, the DOJ report also revealed that many cases of violence go unreported. When cases are reported, the officers are rarely punished. The report was also highly critical of the investigative division of the Department of Correction, saying it was understaffed and very slow, with out of date methods for processing investigations.

Mayor Bill de Blasio has promised to systematically bring Rikers under control and quell the rising violence. He began by appointing a new corrections commissioner, Joseph Ponte, who is known for reform, and by allocating funds to hire more correctional officers and to spend on mental health programming. However, amidst these promises, the city still has only 49 days to release a plan to implement major changes or risk federal intervention. This Thursday, the New York City Council has the chance to pass legislation which would bring about greater transparency and oversight to Rikers.

City Council Member Daniel Dromm (D-25) of Queens spoke at the press conference regarding the legislation he introduced in April, which would require the Department of Correction and the city’s Department of Health and Mental Hygiene to submit a quarterly report detailing the use of “punitive segregation”- solitary confinement used for punishment. The report would also require the DOC to document the number of inmates enduring additional restraints such as shackles, waist-chains, and hand mittens. The bill currently has 26 sponsors within the Council.

The bill has also received support from the Mayor. An article published Monday by Capital New York quoted Mayor de Blasio’s spokesperson Marti Adams saying “Mayor de Blasio is supportive of this bill, and the Speaker and Council’s efforts to encourage more transparency and use data to more effectively develop, manage and monitor programs that support better outcomes for the individuals incarcerated in our city’s jails.” The Mayor is given 30 days to either veto or sign the bill if passed by the City Council.

Council member Andy King of the Bronx, a supporter of the bill, commented at the press conference that this new legislation would allow the City Council to get proper information in order to hold the institution of Rikers accountable. “We need to make sure these young men get treated like human beings, not like animals, not like dogs. This is not a way to treat human beings…We’re supposed to do everything we can to rehabilitate these young men and help them reintegrate into society.”

In addition to advocating for the new legislation, Councilman Dromm as well as other speakers pointed to the responsibility of Norman Seabrook, president of the New York City Correction Officer’s Benevolent Association (COBA), to decrease violence at Rikers and bring about positive change. Dromm recounted an incident he experienced with Seabrook while touring Rikers in which Seabrook questioned what right Dromm had to be there. Dromm retorted that he had every right and went on to tell the audience “Seabrook needs to stand up and take accountability for what’s going on at Rikers. Norman Seabrook needs to stand up and be a part of the solution not the problem.”

The press conference was organized by the New York City’s Jails Action Coalition (JAC), a group of activists comprised of the formerly incarcerated, currently incarcerated, family members and other community members that work to “promote human rights, dignity and safety for people in New York City jails.” Speaking at the event were individuals representative of many groups including the Incarcerated Nation Campaign, the New York Civil Liberties Union, the Fortune Society, Education from the Inside Out, Just Leadership USA, the Bronx Defenders and the Brooklyn Defenders Services.

Johnanna Miller, the Advocacy Director of the New York Civil Liberties Union, summed up the sentiment of the day in saying “The city is failing to protect the basic human rights of New York citizens at Rikers… This is happening to New Yorkers that haven’t even had their day in court.” She went on to say “Transparency is only the first step. The culture of brutality must stop.”