Many times, on this site and elsewhere, we have referred to supermax prisons and solitary confinement units as “America’s domestic black sites“–places where terrible suffering, even torture, take place on a daily basis, out of site of the public, the press, and in some cases the government’s own meager oversight. At the dark heart of these black sites is the federal Bureau of Prisons’ U.S. Penitentiary Administrative Maximum, or ADX, in the remote high desert town of Florence, Colorado. We’ve called it the worst prison in America. It’s worst not because it is dark and filthy–in fact, one former warden called it “a clean version of Hell“–but because of the sheer extremity of the isolation and sensory deprivation visited upon the men held there.

Today, Amnesty International released a report on ADX, entitled Entombed: Isolation in the Federal Prison System. “The US government’s callous and dehumanising practice of holding prisoners in prolonged solitary confinement in the country’s only federal super-maximum security prison amounts to cruel, inhuman or degrading treatment or punishment and is in violation of international law,” said Amnesty in a press release.

The report describes what is called the “Alcatraz of the Rockies” as a place studiously designed to deprive men of all human contact, and nearly all sensory stimuli as well:

The ADX Florence federal facility has a capacity for 490 male inmates. Prisoners spend a minimum of 12 months in solitary confinement before they may become eligible for a reduction in the restrictions of their detention. In reality, many spend much longer in isolation. One study produced by lawyers found the average length of time an inmate would spend in isolation was 8.2 years.

Most inmates are held in cells with solid walls and a barred, air-lock style chamber in front of a solid metal door, to ensure they have no contact with other prisoners. One small slit of a window allows them a view of the sky or a brick wall.

Furniture in the cells is made of poured concrete and consists of a fixed bunk, desk and a stool, as well as a shower and a toilet. Meals and showers are taken inside the cells and medical consultations, including mental health checks, are often conducted remotely through teleconferencing.

The results of such treatment are not surprising: Put simply, it drives men mad. Individuals with mental illness are supposed to be banned from ADX, but many clearly have underlying psychiatric problems when they arrive, while others quickly acquire them. Drawing on information from the current lawsuit Cunningham v. BOP, the Amnesty report recounts the story of John Jay Powers (whose own writing has been featured on Solitary Watch):

JP, a prisoner with a history of mental illness, was transferred to ADX in 2001 and placed in the CU to serve a 60 month sentence imposed after he escaped from a medium security prison. The lawsuit describes how he was repeatedly transferred for brief periods to the federal medical facility at Springfield for psychiatric evaluation after a series of incidents of self-harm, only to be returned to the CU after being “stabilised” with medication. The self-harming incidents included lacerating his scrotum with a piece of plastic (2005); biting off his finger (2007); inserting staples into his forehead (2008); cutting his wrists and being found unconscious in his cell (2009). He finally completed his CU term in 2011, ten years and five months after his original term would have expired had he been able to comply with the behavioural requirements. According to the lawsuit, he continued to be deprived of mental health care after being placed in the ADX GP. In January 2012, he reportedly sliced off his earlobes and in March 2012 sawed through his Achilles tendon with a piece of metal; after he again mutilated his genitals in May 2012 he was placed on the anti-psychotic medication Haldol but had no access to other treatment such as mental health counselling. In August 2013, he left ADX on an emergency mental health transfer to Springfield, Missouri. In October 2013, he was sent to USP Tucson but was transferred back to Springfield in about March 2014 after he rammed his head into an exposed piece of metal in his cell, causing a skull fracture and brain injury, for which he refused most treatment. Since arriving at Springfield he has inserted metal into his brain cavity through the hole that remain in his skull, which BOP says cannot safely be removed.

Entombed is the most comprehensive report to date on ADX. But Amnesty International acknowledges the limitations on its own ability to observe and assess conditions at the supermax, due to the “restrictions on access to ADX” and more generally a “lack of transparency regarding BOP use of isolation.”  Amnesty’s requests to visit the prison have been turned down, as have requests from the UN Special Rapporteur on Torture, Juan Méndez, and numerous media outlets including Solitary Watch. Even the federal government’s ongoing “internal audit” of its use of solitary confinement will not look at the most extreme and secretive isolation unit at ADX, where prisoners have reportedly gone on hunger strike and been force-fed.

Amnesty makes a series of recommendations which, considering the content of the report, seem relatively modest, designed to alleviate some of the suffering at ADX without compromising safety. But perhaps the strongest question raised by this and all previous investigations of the nation’s only federal supermax is why we are building another one. Over $50 million in this year’s BOP budget will go to retrofitting, staffing, and opening USP/ADX Thomson in rural Illinois, which will substantially increase the federal government’s capacity to hold people in torturous isolation. 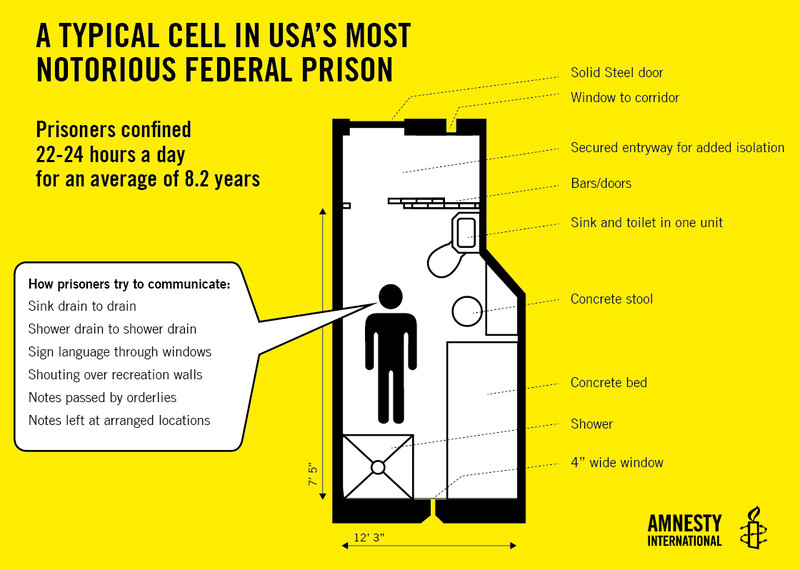