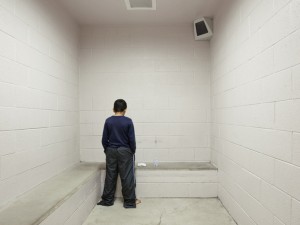 In a weekly video message earlier this month, Attorney General Eric Holder made the first public statement on solitary confinement to emerge from the Obama White House (or, as far as we know, any U.S. presidential administration).

A statement accompanying the 3-minute video on the Department of Justice’s website outlines the position taken by Holder–and, by implication, the DOJ and the Obama administration as a whole:

Attorney General Holder spoke out against excessive use of isolation and solitary confinement for young people with disabilities at juvenile detention centers, saying that juvenile incarceration must be used “to rehabilitate, and not merely to warehouse and forget.” Citing reports that described young people being held in confinement for up to 23 hours a day, the Attorney General called for an end to unnecessary or excessive seclusion of youth with disabilities, which can be counterproductive and in some cases extremely harmful.

Any statement on solitary by the nation’s top justice official is certainly significant. Yet it would be difficult to add more qualifiers to Holder’s denouncement of solitary confinement. His criticism is limited to the use of solitary on the most extremely vulnerable (and sympathetic) victims–children with mental illness and other disabilities–and even then, only to “unnecessary or excessive” isolation.

Holder’s video ends without any concrete commitment to take action, although the ACLU has for some time been calling on the Attorney General to ban the use of solitary for all youth held in federal custody. But a week later, on May 21, the Justice Department released some news that signaled its intent to back Holder’s statement, even if on a limited basis:

The United States and private plaintiffs announced today that it has reached an agreement with the state of Ohio, under which the State Department of Youth Services (DYS) will dramatically reduce, and eventually eliminate, its use of seclusion on young people in its custody. DYS will also ensure that young people in its juvenile facilities receive individualized mental health treatment to prevent and address the conditions and behaviors that led to seclusion.  The order resolves allegations that the state subjects young people with mental health needs in its custody to harmful seclusion and withholds treatment and programming, in violation of their constitutional rights.

“Overreliance on solitary confinement for young people, particularly those with disabilities, is unsafe and counterproductive,” said Attorney General Eric Holder.  “This agreement will help ensure that incarceration in Ohio’s state facilities is humane and that appropriate treatment is provided for young people with mental illness.  The Justice Department will continue to evaluate the use of solitary confinement so that it does not become a new normal for incarcerated juveniles.”

This move, which comes after years of litigation, will end one particularly abominable use of solitary confinement, and will improve the lives of countless children in juvenile facilities in Ohio. And it may set a precedent for similar DOJ action in other states. In this sense, it is a laudable example of incremental change.

But the agreement does not extend to the tens of thousands of children held in adult prisons–a significant percentage of whom, evidence suggests, may experience solitary confinement. In fact, in his video address, Holder explicitly acknowledges that isolation a necessary tool for controlling captive populations, including youth.

Furthermore, by criticizing solitary only for one small a specific group, Holder’s statement more than implies that the use of isolation is all right for everyone else. This conviction is borne out by other actions taken by the U.S. DOJ and the Obama administration more broadly, including its treatment of detainees both at Guantanamo and on American soil. It was, after all, the White House and its friends in Congress who engineered the purchase of a prison in Illinois slated to house men in extreme isolation, on the order of the notorious ADX Florence in Colorado.

In fact, one day after it announcement the Ohio settlement, the DOJ, successfully beat back a Constitutional challenge from Thomas Silverstein, who is perhaps the most brutally isolated man in America. A federal appeals court ruled that Silverstein’s 30 years of solitary confinement under a “no human contact” order in ADX and a series of other federal prisons does not constitute cruel and unusual punishment. (Read Silverstein’s description of his time in solitary here, and judge for yourself.)