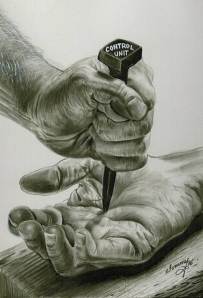 Thomas Silverstein, who has been described as America’s “most isolated man,” has been held in an extreme form of solitary confinement under a “no human contact” order for 28 years. Originally imprisoned for armed robbery at the age of 19, Silverstein is serving life without parole for killing two fellow prisoners (whom he says were threatening his life) and a prison guard, and has been buried in the depths of the federal prison system since 1983.

In his current lawsuit against the Federal Bureau of Prisons, Silverstein contends that his decades of utter isolation in a small concrete cell violate the Constitution’s ban on cruel and unusual punishment, as well as its guarantee of due process. (The lawsuit, brought by the University of Denver’s Civil Rights Clinic, is described in detail in our article “Fortresses of Solitude.”)

In support of that lawsuit, Silverstein, now 59, has written a long “declaration,” the purpose of which “is primarily to describe my experience during this lengthy period of solitary confinement: the nature and impact of the harsh conditions I have endured in spite of a spotless conduct record for over 22 years, and my lack of knowledge about what, if anything, I can do to lessen my isolation.” After apologizing “for the actions that brought me here in the first place,” particularly the murder of corrections officer Merle Clutts, Silverstein contends that he has “worked hard to become a different man.” He continues, “I understand that I deserve to be punished for my actions, and I do not expect ever to be released from prison…I just want to serve out the remainder of my time peacefully with other mature guys doing their time.”

The bulk of the declaration is a detailed account of Silverstein’s experiences and surrounding in a series of what constitute the most secure and isolated housing in the federal prison system: in the notorious Control Unit at Marion, the supermax prototype; at USP Atlanta in a windowless underground “side pocket” cell that measured 6 x 7 feet (“almost exactly the size of a standard king mattress,”); at Leavenworth in an isolated basement cell dubbed the “Silverstein Suite”; on “Range 13” at ADX Florence, where the only other prisoner was Ramzi Yusef; and finally in ADX’s D-Unit, where he can hear the sounds of other prisoners living in neighboring cells, though he still never sees them.

The following is from Tommy Silverstein’s description of his life at USP Atlanta:

The cell was so small that I could stand in one place and touch both walls simultaneously. The ceiling was so low that I could reach up and touch the hot light fixture.

My bed took up the length of the cell, and there was no other furniture at all…The walls were solid steel and painted all white.

I was permitted to wear underwear, but I was given no other clothing.

Shortly after I arrived, the prison staff began construction on the side pocket cell, adding more bars and other security measures to the cell while I was within it. In order not to be burned by sparks and embers while they welded more iron bars across the cell, I had to lie on my bed and cover myself with a sheet.

It is hard to describe the horror I experienced during this construction process. As they built new walls around me it felt like I was being buried alive. It was terrifying.

During my first year in the side pocket cell I was completely isolated from the outside world and had no way to occupy my time. I was not allowed to have any social visits, telephone privileges, or reading materials except a bible. I was not allowed to have a television, radio, or tape player. I could speak to no one and their was virtually nothing on which to focus my attention.

I was not only isolated, but also disoriented in the side pocket. This was exacerbated by the fact that I wasn’t allowed to have a wristwatch or clock. In addition, the bright, artificial lights remained on in the cell constantly, increasing my disorientation and making it difficult to sleep. Not only were they constantly illuminated, but those lights buzzed incessantly. The buzzing noise was maddening, as there often were no other sounds at all. This may sound like a small thing, but it was my entire world.

Due to the unchanging bright artificial lights and not having a wristwatch or clock, I couldn’t tell if it was day or night. Frequently, I would fall asleep and when I woke up I would not know if I had slept for five minutes or five hours, and would have no idea of what day or time of day it was.

I tried to measure the passing of days by counting food trays. Without being able to keep track of time, though, sometimes I thought the officers had left me and were never coming back. I thought they were gone for days, and I was going to starve. It’s likely they were only gone for a few hours, but I had no way to know.

I was so disoriented in Atlanta that I felt like I was in an episode of the twilight zone. I now know that I was housed there for about four years, but I would have believed it was a decade if that is what I was told. It seemed eternal and endless and immeasurable…

There was no air conditioning or heating in the side pocket cells. During the summer, the heat was unbearable. I would pour water on the ground and lay naked on the floor in an attempt to cool myself…

My vision deteriorated in the side pocket, I think due to the constant bright lights, or possibly also because of other aspects of this harsh environment. Everything began to appear blurry and I became sensitive to light, which burned my eyes and gave me headaches.

Nearly all of the time, the officers refused to speak to me. Despite this, I heard people who I believed to be officers whispering into my vents, telling me they hated me and calling me names. To this day, I am not sure if the officers were doing this to me, or if I was starting to lose it and these were hallucinations.

In the side pocket cell, I lost some ability to distinguished what was real. I dreamt I was in prison. When I woke up, I was not sure which was reality and which was a dream.

In a summing up, Silverstein reflects on the physical and psychological effects of 28 years in solitary and on his own development as a self-taught artists and practitioner of yoga and Buddhist meditation. He reiterates his plea to be allowed into the BOP’s “Step-Down program” toward less isolated confinement. The complete declaration, which runs to 64 pages, can be read here.

Update: A declaration submitted as an exhibit in the case, by Dr. Craig Haney, one of the nation’s leading experts on the effects of prolonged solitary confinement, can be read here.