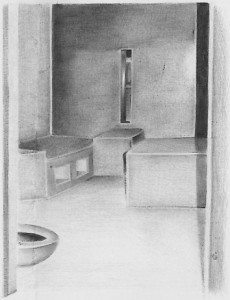 Billy Sell committed suicide in Corcoran’s SHU. This is his drawing of the cell in which he lived for years. (Photo courtesy of Prisoner Express)

Videos of California prison guards pumping pepper spray into the cells of prisoners – some of whom were naked and screaming, all of whom suffer from mental illness – and then forcibly extracting them from their cells were shown at trial in a federal court room in Sacramento on Tuesday.

The trial, part of a federal case initially filed in 1991, marks the first day of a lawsuit brought by legal advocates contending that incarcerated people with mental illness are subject to brutal and inhumane treatment by the California prison system. The suit also alleges violations which include insufficient access to inpatient care for people held on California’s death row and inadequate treatment for people held in solitary confinement in California’s Security Housing Units (SHUs).

Reporting on the first day of hearings, the Los Angeles Times describes the graphic footage: “For nearly an hour Tuesday, U.S. District Judge Lawrence Karlton’s Sacramento courtroom was filled with panicked screams from videos showing prisoners in pain, begging for help and pleading for the spraying to stop, while guards shouted over and over, ‘Cuff up!'”

The Sacramento Bee describes a particularly disturbing incident during which a man is shown playing with his feces in his cell while refusing to take medication from a visiting psychologist. The video shows a team of guards in protective suits wearing gas masks and helmets waiting outside his cell door:

Almost immediately after the psychologist emerged, the team began pumping pepper spray through the food port of the metal cell door, repeatedly dousing the inmate between warnings that he better come out.

The team opened the door, dragging the inmate out and wrestling him to the floor as he alternately sobbed and screamed, “Don’t do this to me,” “help,” and “I don’t want to be executed.”

Expert witness Eldon Vail, former director of the Washington state prison system, recounts the brutal tactics used by guards during a cell extraction. As reported by the Associated Press:

One shows a Corcoran State Prison inmate being sprayed repeatedly in his cell in a mental health crisis unit last year because he refused to take his psychiatric medication, according to court documents.

He “was not lucid or coherent enough” to follow guards’ orders that he allow himself to be handcuffed as he screamed in pain from the pepper spray… The guards then sprayed him again at close range.

By the time guards finally entered the cell, it was so slick with pepper spray that they and the inmate wound up in a pile sliding across the floor, according to Vail, the former director of the Washington state prison system.

Lawyers for the state argued that the videos were taken out of context and, as a result, were misleading. According to the Associated Press:

Lawyers representing the state said in opening statements that the force shown in the videos followed sometimes hours of clinical interventions and other steps to assist inmates. They said the inmates’ attorneys did not properly review the agency’s statewide policy for using force.

“There’s simply no pattern of practice of excessive use of force against the mentally ill,” said California Deputy Attorney General Patrick McKinney, adding that any use of force is later reviewed at several levels.

As reported by the Associated Press, the state initially objected to the videos being shown in public:

Gov. Jerry Brown’s administration unsuccessfully sought to keep the videos from being shown in open court. Last week, U.S. District Court Judge Lawrence Karlton denied that request and ruled that the videos can be shown publicly.

During the hearing, experts hired by attorneys representing the prisoners described sweeping failures in the state’s prison system, including psychiatric units which were understaffed, excessive use of pepper spray blasts by guards at prisoners for petty infractions and excessive use of force by guards, described by one expert as “brutal” and “inhumane.”

In fact, the state’s own expert witness stated under oath that guards were far too reliant on pepper spray. The Associated Press reports:

The state’s own expert witness, Steven Martin, a corrections consultant with 40 years’ experience as a guard, prison administrator and court monitor, said in sworn testimony that guards use pepper spray far too often and much too heavily because they lack training and because prison policies encourage its use…

[Martin] said he saw more pepper spray in a single California guard tower “than most prisons have for their entire prison.”

“I was stunned at the arsenal they had,” …[he] said in a deposition. He was shocked to see that a typical guard is equipped with a collapsible metal baton, a can of pepper spray large enough to control riots and two chemical grenades.

Most prison systems don’t need that level of weaponry to control their inmates, he said. Moreover, he said guards routinely use canisters of pepper spray the size of a fire extinguisher on unarmed inmates when a much smaller quantity would have accomplished the same purpose.