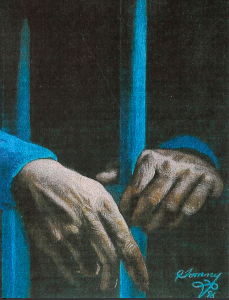 Thomas Silverstein has been called “the most dangerous prisoner in America,” based on several prison murders that took place 30 years ago. He has also been called “America’s most isolated man,” based on the conditions in which he has lived during those 30 years–conditions which, Silverstein and his lawyers contend, clearly constitute cruel and unusual punishment.

Silverstein’s closely watched lawsuit, a groundbreaking Constitutional challenge to solitary confinement, had another day in court yesterday as attorney Laura Rovner argued his case before a federal appeals court. A detailed story on the appeal and its significance appeared in the Colorado Independent, written by longtime solitary watcher (and now Independent editor) Susan Greene.

By law, you get 15 minutes to argue in the U.S. Tenth Circuit Court of Appeals. The rules are the rules.

Yet that rule comes across as painfully ironic in the case of a man who has spent a million times that limit — 15,778,470 minutes and counting – in prison isolation. Tommy Silverstein, 61, has lived in solitary confinement nearly half his life, and longer than any other prisoner held by the federal government.

Silverstein won’t be allowed to visit Denver’s Byron White Courthouse on Tuesday to challenge the U.S. District Court ruling that said he has been unharmed by living for 30 years alone in a cell that’s smaller than a wheelchair-accessible parking spot or a Chevy Suburban. Silverstein says he gets less than a minute per day of human contact, mainly in the form of officers passing food trays in and out of the slot in his cell door or asking “Rec?” — guard-speak for “would you like to go outside?” They mean for an hour in an isolated exercise cage known among prisoners as a “dog run.”

Silverstein is no choir boy. He robbed a bank as a young man. He was later convicted of killing two men in prison. And he led the Aryan Brotherhood, a national prison gang, through the early 1980s.

In 1983, he fatally stabbed officer Merle Clutts at the U.S. Penitentiary in Marion, Illinois. That killing coincided with another murder of a guard by a prisoner that same day at Marion, which had replaced Alcatraz as the federal government’s highest security prison. Those murders punctuated a rash of prison violence that decade and led to a national movement to build supermax prisons made up exclusively of solitary confinement cells for prisoners who, like Silverstein, were deemed to be the “worst of the worst.” The U.S. Bureau of Prisons built its supermax, the United States Penitentiary, Administrative Maximum Facility – commonly referred to as ADX – in Florence, Colorado. Known as the crown jewel of the federal system, ADX is considered the most secure prison on the planet. No one has ever escaped.

Greene details the conditions in which Silverstein has lived for the last three decades in a series of supermax prisons. Those conditions were described by Silverstein himself in a lengthy brief, which we reported on here. Then Greene describes the issues at hand in the federal appeal.

Two top national prison experts said the conditions Silverstein has endured are the most severe they’ve ever encountered.

“Not only has he been subjected to the most extreme forms of isolation I have ever seen — placed in housing units that were literally designed to isolate him as completely as possible from other human beings — but he also has been confined in these places for an extraordinary length of time,” wrote Dr. Craig Haney, a psychology professor at the University of California, Santa Cruz, who has studied solitary confinement for 30 years.

Steve Martin, another noted prison expert, wrote: “The level of near total isolation from all human contact is unprecedented in my 38 years experience in corrections, which includes experience with numerous death rows and ultra-high security facilities across the U.S.”

Laura Rovner, director of the student law clinic at the University of Denver, is Silverstein’s longtime lawyer who has worked with several crews of law students representing him. On Tuesday, she’ll challenge a 2011 U.S. District Court decision that upheld the Bureau of Prison’s assertions that Silverstein’s decades in solitary haven’t deprived him of life’s basic necessities. Judge Philip Brimmer sided with the BOP’s lawyers from U.S. Attorney John Walsh’s office that the case shouldn’t go to trial.

The question before the three-judge appeals panel Tuesday morning will be whether there are factual issues in dispute that would warrant a trial. Among those are:

• The Bureau’s claim that 30 years in isolation haven’t harmed Silverstein. Experts who have evaluated him have found extensive evidence of depression, cognitive impairment, memory loss, hallucinations, severe anxiety disorder, panic attacks that make his him breathless and shaky in the company of others, and paranoia that leads him to hear voices whispering to him through vents.

• The Bureau’s assertion that Silverstein is too dangerous to lessen the extreme solitary confinement conditions in which he is housed. Silverstein’s lawyers challenge this argument based on the two best predictors of a prisoner’s future dangerousness. One is age. At 61, Silverstein has statistically aged out as posing a risk of violence. Another predictor is recent behavior. His prison record has been clean for more than two decades.

Rovner will argue that Silverstein should have his day in court to determine whether 30 years in extreme isolation amounts to cruel and unusual punishment. Silverstein is not requesting anyone to lift his three life sentences. Rather, having spent years studying Buddhism in prison, he wants to demonstrate at trial that he has changed. He also wants a shot at working his way out of solitary and some day dining and playing checkers with other prisoners and hugging his two children.

“I am quickly becoming an old man. I spend most of my days crocheting items for my family and my legal counsel and working on my artwork. It is hard to reconcile the [Bureau’s] description of me as frightening and scary, when the people who see me here know I am a man peering through bifocals trying to count the number of stitches to make and afghan,” he wrote. “It’s hard, if not impossible, for me to prove what is actually in my mind and what is not. All I can do is ask that others look at my current behavior and explain that it reflects my intention never to act violently again, ever. I know the consequences – both to myself and others – that will follow. And, more importantly, I know that this is not who I wish to be.”

For Rovner and the dozens of D.U. law clinic students who over the years have revolved on and off of his case, Silverstein is an amiable and grateful client who crochets hats, mittens, scarves and blankets for them and their relatives. When he has art supplies, he uses pastels and paint to make them artwork.

That said, and despite his public apologies for his crimes, a three-time prison killer and former Aryan Brotherhood leader isn’t the most sympathetic figure in the growing national movement to end long-term solitary confinement. Silverstein’s case pivots not on redemption but on what, given all the research on the psychological harm of extreme isolation, is deemed to be cruel and unusual treatment of prisoners.

“The 8th Amendment is about what we as a society are willing to sanction as punishment. It has built into it this notion of evolving standards decency that mark the progress of a maturing society,” Rovner said. “The amendment doesn’t just protect people who are catatonic or floridly psychotic. It protects people from being harmed by the minimal civilized measure of life’s necessities, especially for what has been an unthinkable period of time.”

In 2011, Juan Mendez, the United Nations special rapporteur on torture, issued a statement calling for an “absolute prohibition” of solitary confinement beyond fifteen days. He has asked, but not been allowed to tour ADX. The prison is the subject of a federal class action lawsuit about how it treats its mentally ill prisoners, some of whom starve themselves, self-mutilate to the point of cutting off their testicles or, as was the case with prisoner Robert Knott earlier this month, hang themselves with bed sheets.

Mental health professionals, state legislatures and human rights organizations have condemned prolonged isolation, which is defined by the American Psychiatric Association as a period greater than three to four weeks.

“Given that four weeks of solitary confinement was described as potentially harmful, the 30-year duration in this case compels scrutiny. If shorter periods of solitary confinement have resulted in psychological distress and symptoms, it is not unreasonable to assume that substantially longer durations provide a greater risk of serious health consequences,” several national groups and experts wrote the court on Silverstein’s behalf.

A division of the U.S. Justice Department, under the federal Civil Rights of Institutionalized Persons Act (CRIPA), has investigated and found violations of state prisons for the overuse of solitary confinement. Perhaps the greatest irony about Silverstein’s case is that solitary confinement as practiced by the Bureau of Prisons, also an arm of the Justice Department, is exempt from that civil rights division’s review.