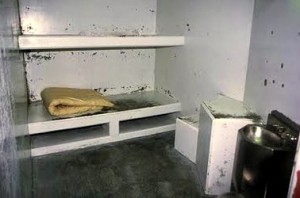 A SHU cell at Pelican Bay State Prison, where men spend years or decades in isolation.

Hundreds of people held in California prisons are expected to launch their third large-scale hunger strike in two years today. The current strike, announced by leaders at Pelican Bay State Prison on February 14th, is seen as a resumption of the large-scale strikes in June and September 2011, when thousands of prisoners across the state stopped eating for days or weeks in order to press for the five demands laid out by the strike organizers.

The five demands are: an end to group punishment, reform of the current process by which individuals are deemed prison gang members, an end to long-term solitary confinement, adequate and nutritious food, and constructive programming. At the heart of the strike is California’s unique practice of indefinitely housing suspected gang affiliates in Security Housing Units (SHUs), primarily in solitary confinement until they “debrief,” or, “snitch” on fellow gang members.

The prior hunger strikes prompted two California Assembly hearings on the issue of segregation in California’s prisons, a tepid reform of gang validation procedures blasted by SHU prisoners, and a federal lawsuit challenging the gang validation process and mounting an 8th Amendment challenge against long-term solitary confinement. A CDCR attempt to get the lawsuit dismissed was denied in March, and the Los Angeles Times has since reported that the California Correctional Peace Officers Association (CCPOA) has asked to join the lawsuit in defense of the SHUs.

The epicenter of the strike is the SHU at PBSP in Crescent City, California, a super-maximum security facility opened in 1989 for the purpose of dealing with “difficult-management cases, prison gang members, and violent maximum-security inmates.” Over 1,000 people are presently held in the SHU at PBSP, and two thousand additional SHU inmates are held at Corcoran State Prison and Tehachapi State Prison, and many more are held in Administrative Segregation Units (ASU) across the state pending openings in SHU facilities.

In the small, windowless concrete cells designed to limit communication, most in the SHU are held in solitary confinement, sometimes for decades.  As of 2011, California held over 500 in the SHU  for over five years, and 78 for more than 20 years. Increasingly, due to overcrowding, many in the SHU now have cellmates, forced to share a cell designed for only one person.

“Like all oppressed people, prisoners confined to these torture units must not only contend with seeking ways to resist the unrelenting, daily assaults on their psyche and humanity, but must also contend with the prospect of people who have never been subjected to the inexorable psychological and physical degradation of being confined to a bathroom with 2 bunks crammed into it for 23-24 hours a day, every day, trying to define our reality,” writes a group of men held in the SHU at Corcoran State Prison, validated Black Guerilla Family members who have banded together to form the New Afrikan Revolutionary Nationalism Collective Think Tank (NCTT).

The members of NCTT, including Michael Dorrough and J. Heshima Denham, who have corresponded with Solitary Watch, have spent over a decade in the SHU (largely in solitary confinement, until recently) and participated in the 2011 hunger strikes. California prison officials have used their political writings as evidence of Black Guerilla Family gang involvement and thereby continued confinement in the SHU; the BGF was founded as a black nationalist-Marxist-oriented prison organization by prisoner George Jackson in the 1960s. California prison officials see it as a gang, and has  a practice of using political writings as evidence of gang activity. Both Dorrough and Denham insist that they are “New Afrikan” political thinkers, not BGF members.

The majority of individuals in the SHU are there for being deemed (“validated”) members of one of the following prison gangs: Aryan Brotherhood, Nazi Low Riders, Black Guerilla Family, Northern Structure, Nuestra Familia, Mexican Mafia, and the Texas Syndicate.  The leaders of the hunger strike are said to be high ranking members of the Aryan Brotherhood, Black Guerilla Family, Mexican Mafia, and Nuestra Familia.

The strikers have argued that only violent acts and repeated rule violations should justify confinement in the SHU, not merely accusations of gang involvement. While many states segregate gang members from the general population, California is unique in its policy of indefinite segregation in solitary confinement for gang affiliation.

Ahead of the strike, prison guards have allegedly engaged in sleep deprivation tactics against inmates at Pelican Bay, with “welfare checks” being conducted every 30-minutes waking up prisoners, according to Isaac Ontiveros and Azedeh Zohrabi of the Prisoner Hunger Strike Solidarity Coalition. There are no reports that the prior welfare check system ever involved intentionally waking up those in the SHU unnecessarily. The policy, which can be read here, includes the statement that “there is no need to awaken” inmates if “staff can see that the inmates are breathing and not actively involved in self-injurious or life-threatening behavior.”

As was reported throughout the prior two strikes, Pelican Bay strike leader Todd Ashker has told Solitary Watch that his mail has been disrupted. “They’ve been trashing my mail the last four months,” he writes. Denham and Dorrough at Corcoran have reportedly had their cell shaken down in March, with paperwork taken from them.Solitary Watch endeavors to provide updates about the hunger strike as information comes in. Individuals with information are encouraged to contact the writer at: Sal.Solitary@gmail.com.