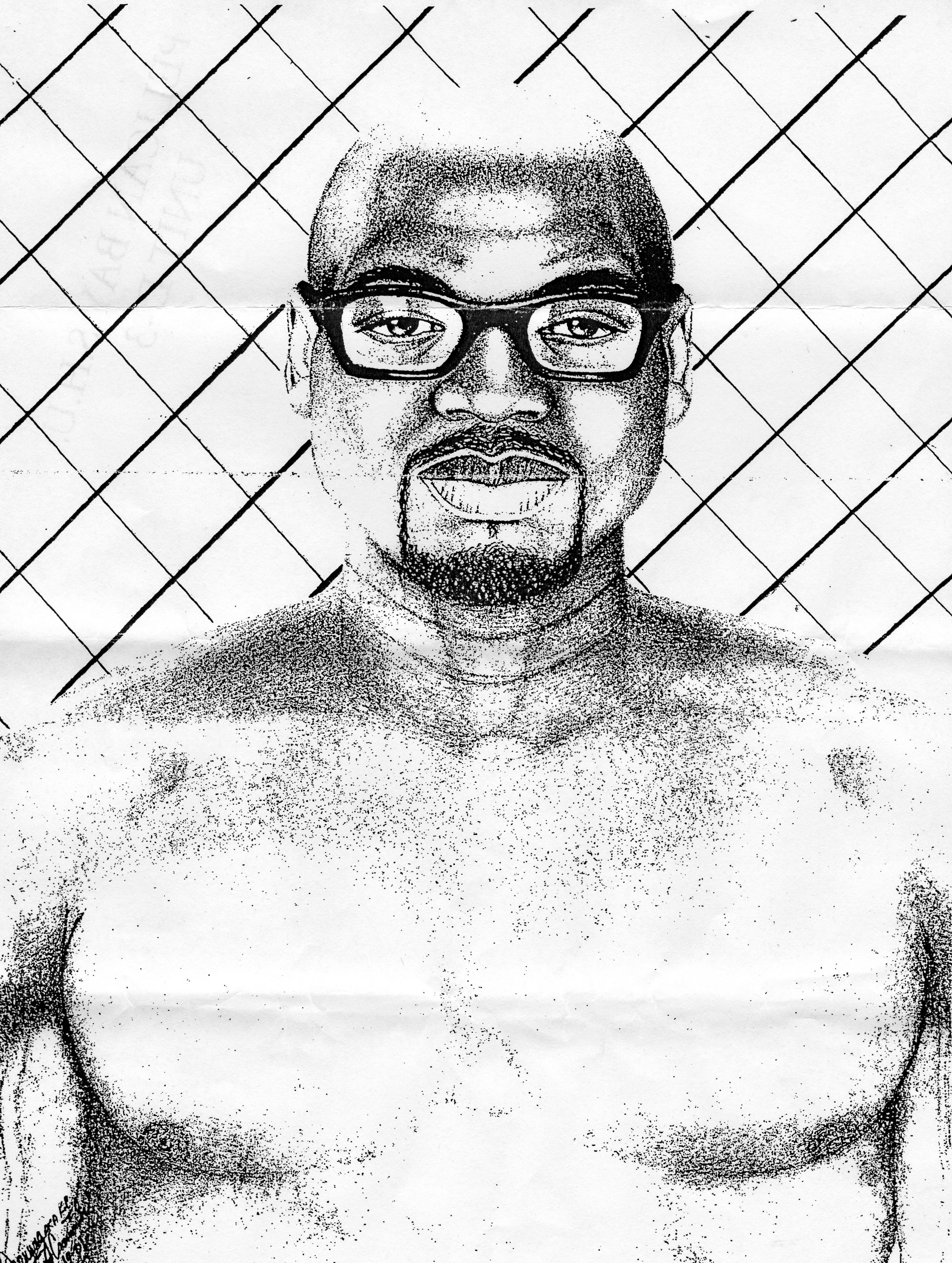 Prisoners in California’s Security Housing Unit (SHU) have offered their opinions of the recent reforms of the California prison system’s controversial gang validation policies. In correspondences with Solitary Watch, people held in SHU at Pelican Bay and Corcoran prisons have consistently been critical of the reforms, which among other things reform the gang validation point system and introduce a step-down program in which prisoners can  transition out of the SHU. Last month, a group of SHU prisoners, all of whom are labeled as either members or leaders of prison gangs (Aryan Brotherhood, Mexican Mafia, Black Guerilla Family), released a counter proposal in response.

The following are excerpts from letters written by prisoners currently in California’s SHUs.

From Kijana Askari (self-portrait above), who has been in the SHU since 1994 after being validated as a member of the Black Guerilla Family:

With regards to the revisions that were done to SHU management gang policies, well, that is exactly what has taken place—“revisions” (e.g. “reform”). Hence, more of the same in that, the revisions have only strengthened CDCR officials power and ability to label and validate every prisoner in CDCR as belonging to a Security Threat Group–e.g. “prison gang.”At the crux of the revisions is a lack of a definitive and “behavioral-based” criteria on what actually constitutes gang activity, meaning that any and everything can and will still be considered as gang activity, in spite of how innocuous the activity may be.

In addition to this, we still have untrained and unqualified CDCR officers/officials determining and assessing what is “gang activity.” And this point is critical for two very important reasons: 1) There are no qualitative oversight mechanisms in place, meaning there is absolutely nothing to prevent CDCR’s prison guards, gang unit, etc., from being vindictive, retaliatory, punitive, etc., via the application of these “revised” gang management policies; and 2) it has been proven that CDCR’s prison guards and their IGI gang unit staff do not properly investigate the evidence used in each prisoners gang validation–see Lira v. Cate.

And the new revisions do not do anything to correct this.

From a Pelican Bay SHU prisoner who has been in solitary confinement for five years and is currently appealing the gang validation that placed him there:

“We were recently afforded a copy of this proposal. Many of us are getting the chance now to read through and evaluate it. I read through it once and will go through it again. There are many aspects of the step down program that at face value seem to provide far better alternatives to the over 20 year long policy of implementing indeterminate SHU programs. Many of the program objectives and privileges outlined in the proposal at first glance look to be very good and beneficial to a lot of SHU prisoners. However, the gang validation/identification aspect of the proposal continues to present an ongoing issue and problem for many individuals who have been validated and will be validated. Under the criteria that is set forth, it continues to target and identify individuals for long-term SHU placement based on gang affiliation rather than actual gang activity or criminal/illegal conduct.”Which is, has been, and under this proposal will continue to be a significant hardship for many who the CDCR looks to place and keep locked away in the SHU for little to no reason.”

From a Corcoran SHU prisoner who has been diagnosed with severe depression:

“We did have an opportunity to see and speak to a couple of representatives from Sacramento who are responsible for crafting language that will reflect the policy change. As we understand there are changes being made to the policy. And the CDCR is in the process of implementing the step down program here at Corcoran SHU. And it is anticipated, according to what we were told, that something would be in place within 60-90 days. At least that’s a target date or time frame.

There was a couple of areas of concern for us. We believe that four years is much too long to be in the step down program. It’s a four year step program, each step is one year. It’s basically an observation program in which you graduate to the next step if you have not been documented as having been involved in gang activity. Just what constitutes gang activity is still being determined.

A lot of guys in Pelican Bay and here have already been in isolation for the past 10, 15, 20, 25, 30, 35 years. Many have been disciplinary free and most were placed in isolation for non-disciplinary reasons. It does not make any sense for guys to have to remain in the SHU.

We believe that those guys that the CDCR (genuinely) intends on placing in general population or non-SHU setting should be placed directly into one.

In light of the struggle (and loss of life) it will be extremely difficult for the CDCR to justify not allowing guys to be released to general population. Or at least be provided some kind of meaningful program in a non-SHU setting.

I was diagnosed with severe depression several years ago.

I don’t know which is worse.

At some point you know that the isolation has affected you. Perhaps permanently. It involves so many different factors. Particularly the isolation itself.

How could you not be affected by this kind of madness?!”

From a Pelican Bay SHU prisoner who has been in solitary confinement since 1988 and participated in the 2011 hunger strikes:

“I fail to see how it is any different from my current SHU term…It did not address the fact that there are prisoners who have been in PBSP-SHU for over 20 years without any kind of serious rule infraction. It is written like every single short corridor prisoner is starting from scratch. In other words, no prisoner should even entertain the idea of leaving SHU for the next four or five years. It sounds like a poorly modified version of the six year inactive status program to me. And the IGI still has control of prisoners’ fate through what is decided through classification, telling them when and where to place us.

Nothing has been gained–they’ve put a different name on the same repressive/torturous measures that have been in effect since the state started locking us up for administrative convenience in extreme solitary confinement isolation. There is absolutely nothing about the step down program that allows a SHU prisoner to work their way out of SHU without the expressed approval of the IGI–the whole program as laid out at present is a bunch of clever words seemingly giving prisoners a way to work our way out of SHU. It’s not! I’ve already been in SHU since 1988, what do I need to work on? What exactly are they going to see in my attitude and actions during the four phases of the step-down program that they haven’t already seen in the past twenty plus years during my extreme isolated confinement for administrative convenience? It just does not make sense.

The following is from a Pelican Bay SHU prisoner who has been incarcerated for 40 years, 35 of which have been spent in the SHU.

“Being a labeled outcast makes it easy to see us no more than a farm animal or dog. Which morally assuages the conscience and culpability of individuals’ roles in our vilification. We are living in the times of the Bogeyman syndrome. The power of fear and mistrust. Suspicion which clouds peoples judgment and common sense. Choosing to be ignorant, unable or unwilling to filter out irrelevant noises and views, they transform into parrots that merely mimic the latest tidbit of information.

I don’t have a positive opinion of the impending SHU policy changes. The basic framework, premise and argument is faulty because phantoms are still used as a justification to subject people to punitive action. I am in SHU for non-disciplinary reasons and have been subjected to punitive isolation based on presumption and fantastic takes sown from the chronicle of the Bogeyman. I have spent 35 years in SHU and I should be unconditionally released to the mainline, especially since I haven’t had any serious rule violation in even twenty-five years except for participation in a hunger strike.”