Suicide in Solitary: A Mother Remembers Her Son 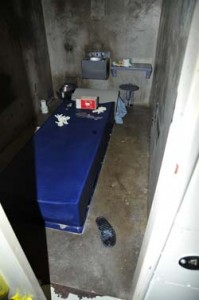 A cell in one of Pennsylvania’s Restricted Housing Units

Yesterday we published a guest post by the Human Rights Coalition (HRC) about the U.S. Department of Justice’s scathing report on the Pennsylvania prison SCI Cresson. According to the DOJ, “Cresson routinely locks prisoners with serious mental illness in their cells for roughly 23 hours per day for months, even years, at a time. At Cresson, the prolonged isolation is all the harder for many prisoners with serious mental illness to endure because it involves harsh and punitive living conditions and, often, unnecessary staff- on-prisoner uses of force.”

Unsurprisingly, “Cresson’s practice of subjecting prisoners with serious mental illness to prolonged periods of isolation under [these] conditions…has resulted in harm, including trauma, bouts of hysteria and extreme paranoia, severe depression, psychosis, serious self-injury and mutilation, and suicide.”

One of the suicides was that of Brandon Palakovic, who hanged himself in his solitary confinement cell at SCI Cresson in July 2012. He was 23 years old, had a long history of mental illness, and was serving a short sentence for a burglary in which no one was hurt. According to the Human Rights Coalition, “After his death, an employee of SCI  Cresson’s medical staff told the Palakovic family that four days prior  to his death Brandon had refused to take his medication. He was issued a  misconduct report for refusal to obey a direct order as a consequence  and sent to solitary confinement in the Restricted Housing Unit (RHU) as punishment.”

After reading the DOJ report, Brandon Palakovic’s mother, Renee Palakovic, wrote the following statement, which was published by HRC:

My son was more than just a prisoner confined to a cell in a state correctional institution. I have spent nearly a year reminding myself of this fact, remembering the good times and trying to heal my broken heart. While time does not heal the wound, it does help me to learn to live with and deal with the pain that is always lingering right at the surface, ready to bring me to my knees at any moment.

So, on Friday, May 31st [2013], when I read the news articles and eventually the Justice Department report later in the weekend, the pain that I have been fighting to control and manage every minute of every day came flooding back in a real and powerful way that I was not prepared for.

Brandon was not an angel by any stretch of the imagination, but he was a human being with feelings and needs. He had ongoing mental health issues for most of his life and there were plenty of records to support that. So when he entered Cresson SCI, he was quickly seen by the psychiatrist(s) and placed on medication to “regulate” his behaviors. But for some reason, because he was in a prison, the need to have follow-up sessions, discuss side effects and work to determine proper dosing was left to fall by the wayside. Why? What psychiatrist does this to a patient? He was ignored. Placed in solitary for extended periods of time and treated like an animal. Taunted by guards who found amusement in toying with his mind and his emotions and given the opportunity to harm himself.

To read the Justice Department’s report and find that his requests for help were ignored, his visits with the psychiatrist skipped and his treatment reduced to ongoing and never-ending confinement in a small cement cell made my heart break all over again and quite frankly, made me mad as hell.

My son was an intelligent, helpful, loving, funny, handsome and charming young man with his whole life ahead of him. Yes, had made some serious errors in judgment and had only himself to blame for those mistakes. He needed to pay for the crimes that he had committed, but not like this. Not in a way that degraded his humanity and assaulted his self-esteem daily. Not in a way that made him believe that he had no self worth, had nowhere to turn and would be better off dead.

For more background on the Pennsylvania prison suicide crisis, see Matt Stroud’s reporting in The Nation and the Philadelphia City Paper.

3 thoughts on “Suicide in Solitary: A Mother Remembers Her Son”