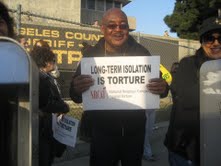 Protestors outside the LA County Jail

Solitary confinement was very much on the agenda during yesterday’s “Occupy for Prisoners”protests at more than a dozen sites around the country. This was particularly true in California, where recent prisoner hunger strikes have called attention to conditons in the state’s all-solitary Security Housing Units (SHUs) and Administrative Segregation Units (ASUs).

The largest rally was staged at the east gate of San Quentin, north of San Francisco, which is the state’s oldest prison and the home of its death row. At least 700 people gathered there on Monday afternoon for a peaceful demonstration. As the Guardian reports:

The call to protest was issued by activists with the Occupy Oakland movement and was co-ordinated to coincide with waves of prison hunger strikes that began at California’s Pelican Bay prison in July. Demonstrators denounced the use of restrictive isolation units as infringement upon fundamental human rights…

Sarah Shourd, Josh Fattal and Shane Bauer – the American hikers who were held for over a year by Iranian authorities – took part in demonstrations outside San Quentin prison in Marin County, California. Addressing the crowd, Shourd described the psychological impact of solitary confinement, saying her 14 and a half months without human contact drove her to beat the walls of her cell until her knuckles bled. Shourd noted that Nelson Mandela described the two weeks he spent in solitary confinement as the most dehumanising experience he had ever been through.

“In Iran the first thing they do is put you in solitary,” Fattal added.

Bauer said “a prisoner’s greatest fear is being forgotten.” He described how hunger strikes became the hikers’ own “greatest weapon” in pushing their captors to heed their demands. According to Bauer, however, the most influential force for changing their quality of life while being held in Iran was the result of pressure applied by those outside the prison. It was for that fact, Bauer argued, that “this movement, this Occupy movement, needs to permeate the prisons.”…

Demonstrators are broadly calling for the abolition of inhumane prison conditions, and the elimination of policies such as capital punishment, life sentences without the possibility of parole and so-called “three strikes, you’re out” laws.

Ironically–but perhaps predictably–prison officials responded to news of the impending protest by increasing restrictions on prisoners. According to the San Francisco Chronicle, “San Quentin was placed on lockdown, meaning prisoners were kept in their cells,  in anticipation of the protest.”

While the rally was taking place at San Quentin, another group of about 100 advocates was demonstrating in front of the Los Angeles County Jail. Members of the National Religious Campaign Against  Torture (NRCAT), ACLU of Southern California, and California Families to Abolish Solitary Confinement were there “to protest  long-term solitary confinement in American prisons, show support for  prisoners, and advocate for legislation that would limit the use of  solitary confinement,” according to a statement from NRCAT.

One attendee, NRCAT board member Virginia Classick, said that the event was “an opportunity to be in solidarity with family members” inside California’s prisons and jails, and to be “visible as part of the witness” to a practice that the religious coalition considers a form of torture. The group’s executive director, Rev. Richard Killmer, stated: “Long-term solitary confinement denigrates a person’s inherent dignity and hinders genuine rehabilitation.  As people of faith, we have been deeply concerned about prison conditions in California that led to the recent prisoner hunger strikes.”