"God's Own Warden": Inside Angola Prison

Editor’s Note: The latest issue of Mother Jones magazine includes James Ridgeway’s long article on Burl Cain, warden of the nation’s largest prison, and possibly its most notorious. The former slave plantation is known for the fact that 90 percent of its more than 5,000 prisoners will die behind bars, and also for holding two members of the “Angola 3” in solitary confinement for nearly 40 years. More recently, it has also become known for the “miracle” wrought by its controversial warden, who is said to have transformed the prison with the help of Christianity.

It took the threat of an ACLU lawsuit for James Ridgeway to gain access to Angola. The resulting article offers an alternative narrative on the miracle at Angola. The opening section of the article follows; the full article can be read on MotherJones.com. 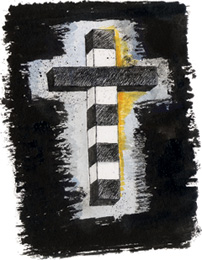 It was a chilly December morning when I got to the gates of Angola prison, and I was nervous as I waited to be admitted. To begin with, nothing looked the way it ought to have looked. The entrance, with its little yellow gatehouse and red brick sign, could have marked the gates of one of the smaller national parks. There was a museum with a gift shop, where I perused miniature handcuffs, jars of inmate-made jelly, and mugs that read “Angola: A Gated Community” before moving on to the exhibits, which include Gruesome Gertie, the only electric chair in which a prisoner was executed twice. (It didn’t take the first time, possibly because the executioners were visibly drunk.)

Besides being cold and disoriented, I had the well-founded sense of being someplace where I wasn’t wanted. Angola welcomes a thousand or more visitors a month, including religious groups, schoolchildren, and tourists taking a side trip from their vacations in plantation country. Under ordinary circumstances, it’s possible to drive up to the gate and tour the prison in a state vehicle, accompanied by a staff guide. But for me, it had taken close to two years and the threat of an ACLU lawsuit to get permission to visit the place.

I was studying an exhibit of sawed-off shotguns when I heard someone call my name. It was Cathy Fontenot, the assistant warden in charge of PR. Smartly dressed in a tailored shirt and jeans, a suede jacket, and boots with four-inch heels, she introduced me to a smiling corrections officer (“my bodyguard”) and to Pam Laborde, the genial head spokeswoman for the Louisiana department of corrections who had come up from Baton Rouge to help escort me on my hard-won tour of Angola.

Everyone was there except the person I had come to see: Warden Burl   Cain, a man with a near-mythical reputation for turning Angola, once   known as the bloodiest prison in the South,  into a model facility. Among  born-again Christians, Cain is revered  for delivering hundreds of  incarcerated sinners to the Lord—running the  nation’s largest  maximum-security prison, as one evangelical publication put it, “with an  iron fist and an even stronger love for Jesus.” To Cain’s more secular  admirers,  Angola demonstrates an attractive option for controlling the  nation’s  booming prison population at a time when the notion of  rehabilitation  has effectively been abandoned.

What I had heard about Cain, and seen in the plentiful footage of  him, led me to expect an affable guy—big gut, pale, jowly face,  good-old-boy demeanor. Indeed, former Angola inmates say that prisoners  who respond to Cain’s program of “moral rehabilitation” through  Christian redemption are rewarded with privileges, humane treatment, and  personal attention. Those who displease him, though, can face harsh  punishments. Wilbert Rideau, the award-winning former Angolite  editor who is probably Angola’s most famous ex-con, says when he first  arrived at the prison, Cain tried to enlist him as a snitch, then sought  to convert him. When that didn’t work, Rideau says, his magazine became  the target of censorship; he says Cain can be “a bully—harsh, unfair,  vindictive.”

“Cain was like a king, a sole ruler,” Rideau writes in his recent memoir, In the Place of Justice.  “He enjoyed being a dictator, and regarded himself as a benevolent  one.” When a group of middle school students visited Angola a few years  ago, Cain told them that the inmates were there because they “didn’t  listen to their parents. They didn’t listen to law enforcement. So when  they get here, I become their daddy, and they will either listen to me  or make their time here very hard.”

Another former prisoner, John Thompson—who spent 14 years on death  row at Angola before being exonerated by previously concealed  evidence—told me that Cain runs Angola “with a Bible in one hand and a  sword in the other.” And when the chips are down, Thompson said, “he  drops the Bible.”

Who is the man who wields so much untempered power over so many human  beings? I wanted to find out firsthand—but when I requested permission  to visit the prison and interview Cain, back in 2009, Fontenot turned me  down flat. Cain, she said, was not happy with what I had written about  the Angola Three, a trio of inmates who have been in solitary longer  than any other prisoners in America. Two years and much legal wrangling  later, I was here at Fontenot’s invitation, ready to see the Cain  miracle for myself…

Read the rest on MotherJones.com.

6 thoughts on “"God's Own Warden": Inside Angola Prison”