Matt Stroud has been doing excellent reporting on solitary confinement in the weekly Philadelphia City Paper. In August he published “A Death in Solitary.”

When Matthew Bullock, a 32-year-old convicted killer, fashioned a noose from a bed sheet that he wasn’t supposed to have, secured it around his neck, tied it to thin steel bars in the face-high window of his solitary confinement cell, then sat down hard in an effort to break his neck and suffocate himself, it wasn’t the first time he’d attempted suicide. In fact, according to a civil lawsuit filed in November 2009 by Bullock’s parents against officials at the Pennsylvania Department of Corrections (DOC) and officials and state-contracted health care providers at the State Correctional Institution at Dallas (SCI Dallas) — where Bullock’s lifeless body was found hanging on Aug. 24, 2009 — Bullock, who had a long history of mental illness, psychotic episodes and auditory hallucinations, had tried to kill himself at least 20 documented times in the decade before his 2003 incarceration, and several more times since. Autopsy photos taken after Bullock’s suicide showed that his forearms were covered from wrist to bicep with scars, apparently self-inflicted by razors and knives. One scar on his right inner wrist appeared to be recent, with scabs only superficially formed. The scars were both horizontal and vertical. Veins were crossed and traced while cuts intersected and mingled. The number of suicidal cuts in both arms was too high to count. 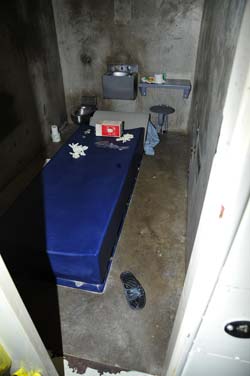 Yet Richard Elders, DOC’s director of the Bureau of Health Care Services, wrote in a Sept. 2 report obtained by Bullock’s parents’ attorneys: “Offender Bullock did not give any indications that he was going to harm himself. … There was no indication noted by staff members who regularly interacted with Offender Bullock that he was depressed and would take his own life.”

Bullock’s parents say that’s simply not true. In their lawsuit, they claim that not only had Bullock tried to kill himself while in custody on multiple occasions, but their son also had repeatedly told SCI Dallas’ corrections officers (COs) about his suicidal inclinations. The COs didn’t ignore him, according to the lawsuit and written statements provided by fellow inmates: They taunted him — and actually encouraged him to take his own life.

When he told COs of his suicidal tendencies, the lawsuit continues, prison officials moved him from a solitary cell that was within view of an observation camera to one that wasn’t. Then, the lawsuit alleges, someone slipped him “instrumentalities which are commonly used to commit or attempt suicide” — a bed sheet, which suicidal inmates in “the hole” are not supposed to have — and COs “incited [Bullock] to ‘kill himself.'”

After that, family attorney Shelley Centini says, Bullock was left alone for hours, though DOC policy mandates that inmates in solitary be checked on every 30 minutes.

During that time, Matthew Bullock made good on his death wish.

The long piece is worth reading in full–among other things, for its depiction of the toturous conditions in the RHU (Restricted Housing Unit). Much of the testimony from prisoners in solitary comes from Institutionalized Cruelty, a recent report from the Human Rights Coalition/Fed up! in Pittsburgh.

As Stroud reported last week, the state of Pennsylvania insists that solitary confinement simply does not exist in its prisons–even though one man has now spent 37 years in isolation.

In Pennsylvania, the phrase itself is controversial. Last month, in testimony before the state House Judiciary Committee, Michael D. Klopotoski, deputy secretary of the Department of Corrections’ (DOC) Eastern Region, said no prisoners in this state — not even one — can be classified as serving time in “solitary confinement.” Susan McNaughton, a DOC press secretary, clarified his semantic stance via e-mail last week: “Solitary confinement is considered where an individual has no contact with other individuals. This is just not the case [in Pennsylvania].”…

In DOC’s view, even the vilest Pennsylvania inmate in state prisons’ restricted housing units (RHUs) has contact with prison staff and is granted brief outdoor recreation time, where, according to McNaughton, “they may have non-contact interaction with others, including other inmates in the individual exercise pens. … So, that is why we don’t consider it to be ‘solitary confinement.’ They are housed in our restricted housing units, which are maximum security units within our prisons.”

2 thoughts on “Life and Death in Pennsylvania's Solitary Confinement Cells”