A federal judge yesterday ruled that current procedures for sending prisoners to the Tamms Correctional Center in southern Illinois–and keeping them there indefinitely–is in violation of the 14th Amendment to U.S. Constitution, which guarantees due process of law. The judge ordered that significant changes be made at the notorious state supermax.

A federal judge has ruled that even inmates termed the “worst of the worst” by state prison system officials have a constitutional right to a hearing before they are sent to what many consider the harshest prison in Illinois — the solitary-only Tamms Correctional Center.

U.S. District Court Judge G. Patrick Murphy, sitting in federal court in East St. Louis, has ruled that all inmates transferred to Tamms, the state’s only supermax prison, must be given a swift hearing and told why they are being sent to the lockup, where most prisoners spend 23 hours a day in their cells and are let out only to walk alone in a steel cage.

“Everybody who has been sent there (Tamms) up until now, have had their constitutional rights violated and has a right to a hearing, a new hearing, to see whether or not they should have ever been sent there in the first place,” said Mills…

Mills said that inmates can now challenge prison system claims that they violated disciplinary rules at other prisons or any administration claim that warrants being sent to Tamms. And they can require prison officials to state a reason for transfer. They also may challenge department claims that they are members of a gang and that is why they were sent to the lockup.

“Many of these inmates have never been told why they were sent to Tamms,” Mills said. He said these inmates include one plaintiff in the lawsuit who had been at Tamms since it opened more than 12 years ago but was never told why.

Murphy also ordered that inmates who have been at Tamms the longest, and many have been there for more than 10 years, will be placed at the head of the list for the hearings. The judge’s order noted that some inmates were not told why they were sent to Tamms until years later…

Judge Murphy made clear that his ruling “is narrowly drawn, extends no further than necessary to correct the violation of the 14th Amendment due process rights of IDOC [Illinois Department of Corrections] inmates placed at Tamms, and is the least intrusive means necessary to correct the violation of the federal rights of such inmates.” He stated that “the supermax prison at Tamms is clean, excellently administered, and well staffed.” This despite the fact that Amnesty International and Human Rights Watch have challenged conditions at Tamms, as has a local activist group, Tamms Year Ten.

New attention was focused on the prison last year, after reporting by George Pawlaczyk and Beth Hundsdorfer found nightmarish conditions at Tamms, which is in many cases used as a de facto asylum for prisoners suffering from serious mental illness. [You can read the original series here.] As Pawlaczyk wrote yesterday:

The treatment of Tamms inmates, especially those who were mentally ill, was the subject of a News-Democrat investigative series in August titled “Trapped in Tamms,” which was followed by more than a dozen follow-up stories. The articles challenged the prison system’s claims that Tamms inmates were the worst of the worst, and reported that more than half of the inmate population had not committed any new crimes since entering prison.

The newspaper reported that many mentally ill inmates were sent to Tamms after throwing urine and feces at guards, assaults that are often handled administratively at other prisons. This behavior, according to mental health experts who study incarceration, can often be a sign of mental illness made worse by solitary confinement. 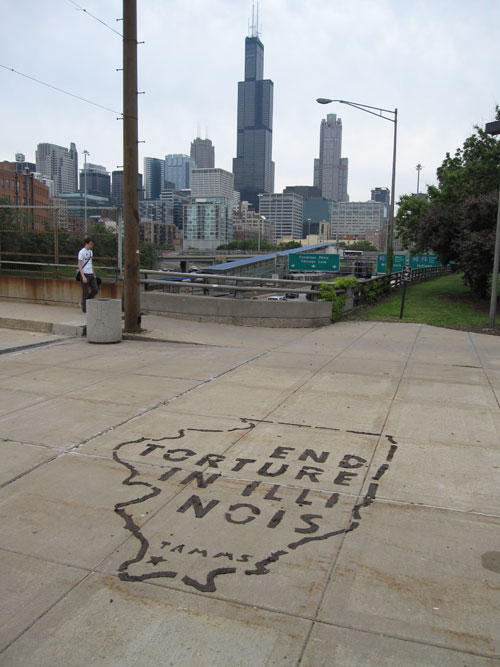 It remains to be seen how much the new ruling will help such inmates. The court stated that during the newly mandated hearings, prison officials can consider “the safety and security of the facility, the public, or any person, [and] an inmate’s disciplinary and behavioral history,” in deciding whether an inmate needs to be held at Tamms. Clearly, an inmate’s “behavioral history” can be affected by untreated mental illness.

However, the prisoners in Tamms have more going for them that many of the of other 25,000-odd inmates held in U.S. supermax prisons: They have local muckraking journalists to expose their living conditions; local and international human rights groups taking up their cause; and excellent pro bono legal representation from the Uptown People’s Law Center. All of these watchdogs will, no doubt, be waiting to see what happens at Tamms when the judge’s order goes into effect.