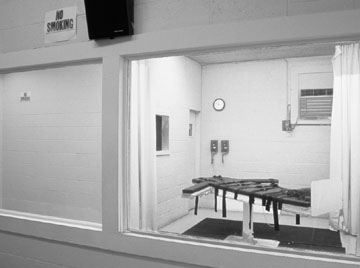 Barring a last-minute stay (which is highly unlikely), Gerald Bordelon will, on Thursday night, become the first person executed in the state of Louisiana in almost eight years. Bordelon’s case is also remarkable because he has chosen not to appeal his death sentence. His right to make that choice that was upheld by the Louisiana Supreme Court, despite pleas from Bordelon’s defense attorneys.

A recent article in the Shreveport Times highlights the controversy around Bordelon’s decision to forego appeals. In particular, it discusses the impact of what is being called “Death Row Syndrome,” a condition caused by prolonged solitary confinement awaiting execution.

Since confessing to kidnapping, raping and murdering his 12-year-old stepdaughter in November 2002, Bordelon actively has sought his execution and vigorously defended his right to waive all appeals.

That quest has made Bordelon exceptional among his fellow death row inmates, who usually fight to stay alive through a lengthy appeal process. It’s also put him at the center of one of the nation’s most contentious death penalty debates….

Death row syndrome or phenomenon refers to the psychological effects experienced by death row inmates who live for years in solitary confinement awaiting their executions. Experts say that prolonged waiting period — in some cases, decades — can cause mental illness that, in turn, can lead to suicidal tendencies or a desire to drop appeals to speed the execution process. Anti-death penalty advocates say the syndrome is further evidence the death penalty is cruel and unusual punishment. Death penalty supporters say the long waiting period is caused by the inmates’ appeals. Nationwide, about 11 percent of persons executed since 1976 have dropped their appeals in order to speed their execution.

In another recent case, a death row inmate in Texas made it clear that he preferred execution to the living death of solitary confinement. Convicted of murdering an 84-year-old woman, Danielle Simpson spent nine years on death row before being granted the right to waive further appeals. At the last minute, Simpson changed his mind and asked his lawyers to save him, but it was too late; he was executed on November 18. As reported by The Guardian:

Danielle Simpson’s scrawled note to the appeal court left the judges in no doubt. “If I can’t be free – Kill Me.!!” the Texas death row prisoner demanded in a rambling and sometimes incoherent handwritten plea earlier this year. “I’m tired of being in a institution generic pill for klonopin that’s unjust, degrading, and corrupted … I’m tired of struggling to survive in a system that’s highly injustices. I’m ready to die!!” Simpson underlined “Kill Me” twice.

The court granted the convicted murderer his wish. It ruled that he was quite reasoned in deciding that life on death row was worse than death itself….

Until 10 years ago, death row prisoners in Texas socialised, worked in the prison garment factory and had contact visits. That changed after a breakout from the old death row in Huntsville by seven inmates in 1998….Death row was moved to a new prison, near Livingston, where conditions were very different.

Simpson lives in a 5.6 square metre (60 sq ft) steel cell, not much bigger than those holding Guantánamo Bay prisoners. For 23 hours a day he is locked in the metal cage, with two plates welded out from the wall as a shelf and a desk, and a steel sink and toilet. Near the ceiling above the bed is a narrow slit that serves as a window. There is another slit in the door through which his food is pushed. His hands are cuffed for his hour of lone exercise. The cells are brightly lit by a fluorescent bulbs….

Death row prisoners have regularly gone on hunger strike over bad food, over sleep deprivation because of the unending noise created by living inside a network of steel cages, and over the alleged brutality of guards, including the regular use of pepper spray.

Hardest of all is the interminable solitary confinement. There is no physical contact with other prisoners, although Simpson can communicate with them by shouting.

The Texas Defenders Service, which represented Simpson, argued that he was not mentally competent to forego his appeals. Lawyer David Dow told The Guardian:

“[Simpson] is delusional, he’s been receiving anti-psychotic medication inside the prison for years. You would certainly think that the fact that he’s on anti-psychotic medicines would alert a judge to do something more than have a five-minute conversation with him to determine whether he’s competent to waive his appeal.”

But the appeal court, in what amounts to an acknowledgement of inhuman conditions on death row, accepted that Simpson’s assertion to the court that the “pitiful” conditions meant he was looking “forward to life after death” was evidence of his mental stability, describing this stance as a “rational choice”.

One thought on “A Louisiana Inmate's Death Wish”