Inside One Lawyer’s Quest to End Solitary Confinement

Last week, Rolling Stone published an article written by Solitary Watch staff writer Katie Rose Quandt about New Mexico civil rights attorney Matthew Coyte, whose has filed lawsuits against lawsuits against counties across the state for the damaging effects of solitary confinement in local jails. Coyte’s victories in these suits—and their hefty cost to local governments—is not only bringing a measure of justice to his clients, but also forcing county and state officials to reconsider their use of solitary.

In 2008, Matthew Coyte, an attorney with a tiny private practice in Albuquerque, New Mexico, was approached by a potential client. Stephen Slevin had spent nearly two years in solitary confinement in Doña Ana County Detention Center, where he developed fungal infections and bedsores, removed his own aching tooth, suffered deteriorating mental illness and descended into a delirium. Coyte took one look at the transformation between Slevin’s booking photo and release photo — during which time his hair and beard had grown long, matted, and unkempt — and took the case.

“Those two pictures were so dramatically different,” recalls Coyte. “It demonstrated what horrors had been wreaked upon him.”

Coyte had worked for years as a public defender in New Mexico, but says he didn’t realize the extent and horrors of solitary confinement until he met Slevin. “I would meet people in red jumpsuits behind a steel door and talk to them through a hole in the door. Like that was normal,” says Coyte. “And that was what I was trained to do as a public defender, and you didn’t really question it. But if you step back and take a more critical look, you start to realize that this is actually something unconscionable, something dramatically inhumane.” 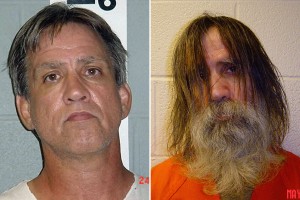 Stephen Slevin before and after spending two years in solitary in the Doña Ana County jail.

Slevin had been booked into the jail in 2005 on charges of driving while intoxicated and receiving or transferring a stolen vehicle, both of which were ultimately dismissed. He was in his early fifties, and suffered from depression but was physically healthy and well-nourished, according to court documents. But after spending most of his 22 months in jail in a padded solitary confinement cell — which he alleged was routine treatment for people with mental illness — he lost one-third of his body weight and was deemed legally incompetent to stand trial.

It is nearly impossible for people to seek justice for mistreatment when they are behind bars. The 1996 Prison Litigation Reform Act (PLRA) instructs courts to throw out federal lawsuits from incarcerated people unless they have exhausted the facility’s cumbersome and often unfair grievance process. And there is a $400 federal filing fee that incarcerated people are required to pay, in installments if necessary — even though incarcerated workers often make less than $1 an hour. Many state courts have similar rules and fees.

Even after being released, when PLRA barriers no longer apply, many formerly incarcerated people have a hard time finding attorneys willing to take their cases. “We’re taught as lawyers that you get a person who looks good, who’s articulate, who comes into court and explains their case,” Coyte says. “The big pushback from lawyers is, ‘Well, I can’t get money for a prisoner.’”

Coyte and Slevin proved otherwise. They filed a federal civil rights suit against the county board of commissioners, the jail, and two staff members, alleging violations of Slevin’s civil and Constitutional rights. They declined Doña Ana County’s $25,000 settlement offer, and after a dramatic trial — in the midst of which Slevin learned he had advanced-stage cancer — a jury awarded $22 million, one of the largest amounts ever awarded in a federal civil rights case involving incarceration. (After continued legal battles, Slevin accepted a decreased settlement of $15.5 million.)

“It wasn’t about money to this guy,” Coyte says of Slevin, who has since died of cancer. “It was about having people say what happened to him in front of a jury, publicly, and be held accountable.”

In the years since, Coyte’s team (consisting of just himself, an associate attorney, and a paralegal) has won settlements in dozens of solitary confinement cases against local jails throughout New Mexico. In 2017, for instance, George Abila settled for $1.9 million, after spending six months in solitary in Eddy County Detention Center, where he developed sores from sleeping on the floor and was given only a drain for a toilet. The mother of Christian Cook, an autistic 15-year-old with mental illness and behavioral issues, settled for $1.8 million with Curry County in 2018 after her son spent months in solitary in Curry County Juvenile Detention Center, where he was denied treatment for his deteriorating mental health and physical ailments, received little education or recreation, and began talking about suicide.

But Coyte is winning more than justice and blockbuster awards for his clients — he’s stumbled onto an effective reform strategy. Some New Mexico counties are straining under the financial burden of these lawsuits, and their statewide insurer is pushing reform as a loss-prevention measure. Coyte’s string of victories and hefty settlements also helped lead to a reform bill on solitary passed in 2019.

“I don’t know how successful we would have been in passing our solitary confinement bill here in New Mexico if it wasn’t for [the Slevin] verdict,” says Barron Jones, senior policy strategist at ACLU New Mexico. “Unfortunately sometimes, you know, the only thing that gets people to take action is money.”