Solitary Confinement, Jail Deaths Rock Race for Sheriff in California
In Santa Clara County, Incarcerated People and a Challenger to the Six-Term Sheriff Have Turned Jail Conditions Into a Potent Electoral Issue

This article is published in collaboration with

In August, Wendy and Chris Hogan called 911 after their 24-year-old son Andy stopped taking his medications for schizophrenia. Andy had hit his father at their home in Milpitas, California, and they were hoping to get help. Instead, deputies from the Santa Clara County Sheriff’s Office arrested Andy Hogan on misdemeanor assault charges and a probation violation. When he was booked, staff at the Main Jail’s Psychiatric Unit noted Hogan’s schizophrenia but determined that he could be held in general population at the Elmwood jail, one of the county’s three jails.

But within days, Hogan complained about hearing voices, said that men were out to get him, and began banging his head against the cell wall. Jail staff then placed him in handcuffs and leg irons in order to transport him to the county’s main jail. In the van, he began banging his head repeatedly against a post. When the van arrived at the jail, supervisors instructed the deputies to leave him inside, unattended, until EMS arrived. Later, EMS opened the van doors and found Hogan unconscious with his skull split open. After the incident, Hogan was in a medically-induced coma but his condition has improved since then.

Three years earlier, in 2015, three Santa Clara County jail deputies fatally beat 31-year-old Michael Tyree, who also suffered from mental illness. Under pressure, Sheriff Laurie Smith investigated and arrested the deputies; in 2017 they were convicted of manslaughter and sentenced to 15 years to life. But problems continued to plague the Santa Clara jail system, which on an average day detains approximately 3,500; nearly 48,000 people, many of them pre-trial, cycle through the jails each year.  In 2016, 2017, and 2018 incarcerated people staged three mass hunger strikes to protest conditions in the jails. More than a dozen suicides have taken place in the jails since 2011, the most recent in mid-October. 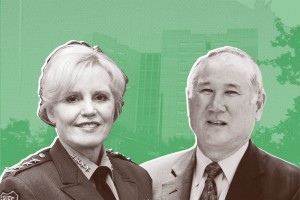 On November 6, Santa Clara County voters will determine if Sheriff Smith deserves a sixth term; conditions of confinement in the jails have emerged as a potent issue in her re-election campaign. Indeed, Smith’s challenger and former undersheriff John Hirokawa has described Smith as “asleep at the wheel” when it comes to management of her jail and her 1,800 employees. Hirokawa said that after Tyree’s death he received calls from Smith’s staff asking for help. “The sheriff’s in town,” he said, “why aren’t you calling her?”

The U.S. has over 3,000 sheriffs, nearly all of whom are elected. For voters—even in enclaves of wealth and education like Santa Clara County, whose nearly 2 million residents include many who live and work in Silicon Valley—this is an often-overlooked ballot on Election Day. But increasingly, prison justice organizers and abolitionists are seizing upon sheriffs’ races to push for much-needed changes to both criminal justice and immigration policies, as well as jail conditions. In North Carolina and Wisconsin, they’ve defeated sheriffs who’ve embraced the 287g program which allows state or local law enforcement to enter into a partnership with ICE for immigration enforcement—and made jail conditions an electoral issue.

Similarly, in Santa Clara, incarcerated people and their advocates have forced the crisis in the county’s jails into the campaign for sheriff. In April, more than 100 incarcerated people in its jails launched a hunger strike protesting the practice of holding people in indefinite solitary confinement, and arbitrarily classifying them into various custody levels. “I am participating in Santa Clara county jail’s current hunger strike due to uneven application of policy which has resulted in discrimination and unfair treatment by administration,” stated one man six days into the strike. “Ultimately, I believe Laurie Smith is responsible.”

This year’s strike, organized by Prisoners United of Silicon Valley, an advocacy group led by people inside the jails, lasted 11 days and was suspended only after jail administrators agreed to meet with hunger strikers. In a letter to Sheriff Smith, participants issued four main demands: an end to the classification reviews, in which jail officials determined people’s housing or security levels; an end to solitary confinement practices; a response to appeals and grievances within 30 days; and increased out-of-cell time, including time to clean their day rooms and showers.

“Many of us have spent over three years in solitary confinement,” explained another hunger striker. “Eventually we were moved to a secretive, more restrictive location which operated a pilot program. Literally, we were stripped searched several times a day. We were deprived of fundamental bare elements of human existence for approximately six to eight months. We were not allowed to go outside, we were not allowed one single breath of fresh air, and not one single ray of sunlight touched our skin.”

Placement in isolation in Santa Clara’s jails isn’t necessarily determined by violent behavior or rules violations. According to Jose Valle of Prisoners United, upon arrival and booking the jail assigns a classification based on the individual’s charges and alleged gang ties. “Based on classification, prisoners can be housed indefinitely in maximum security housing units without any real path to downclass to a less restrictive setting,” he said. “This punitive and subjective classification system leaves this population to be vulnerable to correctional officer violence and mental health crises.”

Such policies, Valle says, mean that Santa Clara’s jails have “a SHU within a SHU,” referring to the notorious Security Housing Unit at California’s Pelican Bay State Prison, where people spend years and sometimes decades, in isolation. “They called it East Little Max,” Valle said of Santa Clara solitary. “They had individuals there because of their [pending] charges. They had no time out-of-cell unless it was in the middle of the night.” This made it impossible for incarcerated people to call their family members or coordinate legal strategies with their attorneys.

The hunger strikers have found some unlikely allies. At the time of the 2016 strike, the Deputy Sheriffs’ Association, the union for the rank-and-file enforcement officers of the Santa Clara County Sheriff’s Office, released a statement criticizing Smith for not being responsive enough to jail conditions ranging from solitary confinement to inadequate clothing. The sheriff’s office agreed to increase out-of-cell time for people with high-security classification and to release them in groups rather than individually.  But these changes weren’t enough to prevent the 2017 hunger strike, which Smith angrily denounced in remarks to  local news outlet San Jose Inside: “We do not allow gangs to run the jails—and some of them could stand to lose a little weight. We will give their fresh food to the Salvation Army again. There are hungry people who committed no crimes and deserve a dinner.”

Complaints about jail conditions have also spawned a federal lawsuit. In 2015, the Prison Law Office filed Chavez v Santa Clara County on behalf of two men held in the county’s jails. The suit, which has since been certified as a class-action, alleges that the county isolated hundreds of people for months, and sometimes years, in cells as small as six-by-seven foot, with little human contact, sunlight, fresh air, or exercise. The lawsuit also claims a pattern of brutality from Santa Clara County Sheriff’s deputies; a investigation by the Mercury News found more than 300 excessive force complaints between 2010 and 2015.

At the same time, the Blue Ribbon Commission on Improving Custody Operations, a civilian-led commission formed after the deadly beating of Tyree in 2015, recommended removing control of the jails from the sheriff’s office, overhauling the jail’s classification system, and creating an independent civilian oversight commission. Though Santa Clara has had a Jail Observer Program, which relies on calls and requests from people in the jails and their families, the program lacks any investigative or regulatory authority over jail operations.

“Having independent oversight is essential any time you have people in closed institutions,” said Michele Deitch, a lecturer at University of Texas at Austin School of Law and an expert in oversight of correctional facilities. “There needs to be some ability to ensure their civil and human rights.” Deitch emphasized that the oversight needs to be ongoing. “These are chronic issues that need to be managed. It’s not a one-time fix.”

Regardless of the outcome of the sheriff’s election, Santa Clara jails will receive independent scrutiny. In the county’s 2018 budget $2.5 million is allocated to establish oversight of the Department of Correction and Sheriff’s Office, including the creation of a nine-member civilian commission and an ombudsman office to provide neutral, outside investigation of complaints and concerns. The county issued a request for proposals for prospective monitors in June.

On October 23, a settlement in Chavez v Santa Clara County was reached; the county agreed to improve medical, dental and mental health care and to change its use of force and solitary confinement policies, including a limit of 45 days in isolation for any single rules violation.

Smith did not respond to requests for an interview from The Appeal and has refused to answer questions from the local press about Andy Hogan. In an emailed statement to The Appeal, however, her challenger blasted Smith’s record on running the county’s jails. “The Sheriff has not taken reforms seriously,” John Hirokawa said, “and in the last two and half years since I retired there have been seven additional deaths in the Jails. Community trust has eroded and the investigations have not been transparent. People should expect more from their sheriff and know that the buck stops with them.”

One thought on “Solitary Confinement, Jail Deaths Rock Race for Sheriff in California”