Could This Be the Worst Solitary Confinement Unit in the Nation?
A Report and Lawsuit Expose Harrowing Conditions in a Georgia Prison

Dr. Craig Haney has investigated the psychological effects of prison conditions for more than 40 years, and has spent time in dozens of supermax prisons and solitary confinement units. But the conditions in the Georgia Diagnostic & Classification Prison’s solitary confinement facility, the Special Management Unit (SMU)—where incarcerated men swallow hacksaw blades and their own feces and urine in desperation, and the air is filled with “a cacophony of prisoner screams and cries for help”—may be the most atrocious he has ever encountered.

“It is one of the harshest and most draconian such facilities I have seen in operation, anywhere in the country,” Haney wrote in an expert report after touring the SMU and conducting anonymous interviews with individuals confined there. Made public in full earlier this month, Haney’s report was originally submitted this May as evidence in an ongoing class-action lawsuit. The suit was originally filed pro se in February 2015 by Timothy Gumm, who was later joined by plaintiffs Robert Watkins and Johnny Mack Brown.

The plaintiffs claim that they and others in the 192-bed unit have been subjected to cruel and unusual punishment and denied due process by current and former officials at the Georgia Department of Corrections (DOC), Georgia Diagnostic & Classification Prison, and the SMU. Within just one year of Gumm’s initial filing, a striking 11 cases with similar fact patterns and claims were submitted to the same U.S. District Court. The men in the SMU are now represented by the Southern Center for Human Rights with pro bono support from the Atlanta-based firm Kilpatrick Townsend & Stockton. 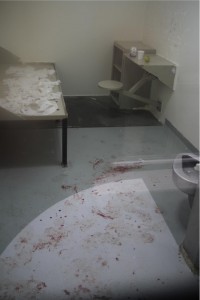 The United Nations’ Mandela Rules condemn the use of solitary beyond 15 consecutive days. Gumm has been held in the SMU—Georgia’s most restrictive solitary confinement facility—for over seven years, placing him among the nearly 20 percent of individuals who have been confined in the facility for six years or more. Haney reports that, based on prison records provided to him by the Georgia DOC, the most common duration of confinement at the SMU is three to four years. According to 2016 joint report by Yale Law School’s Arthur Liman Public Interest Program and the Association of State Correctional Administrators (ASCA), Georgia had 3,880 individuals in solitary confinement in October 2015—the fourth highest state total in the nation.

According the complaint filed by the plaintiffs, “Defendants frequently change [their] policies, but, regardless of the written procedures and standards, prisoners in the SMU are consistently denied meaningful review of their placement and guidance about what they must do to leave the SMU.” Similar practices have at times been found to violate the Constitutional right to due process of prisoners who face prolonged solitary confinement.

According to Haney, they are also particularly harmful to the psychological well-being of those confined in the SMU, as they create uncertainty about their fate and helplessness as to how they might change it. “[T]hey don’t do anything to help you or allow you to help yourself,” one individual in the SMU said during an anonymous interview with Haney.

Gumm’s allegations of cruel and unusual punishment, in violation of the Constitution’s Eighth Amendment, flow largely from the SMU’s soul-crushing deprivation and dangerous environment, described by Haney as “unusually severe and… isolating.” While the solitary confinement cells in some prisons lack windows letting in natural light, and others offer no view into the corridor, the cells in the SMU have the grim distinction of being closed off on both fronts: Photos accompanying the report show metal shields covering both exterior windows and the windows in the cells’ solid metal doors. “The SMU prisoners are in essence hermetically sealed inside their cells for the extended periods in which they are confined there,” Haney wrote. 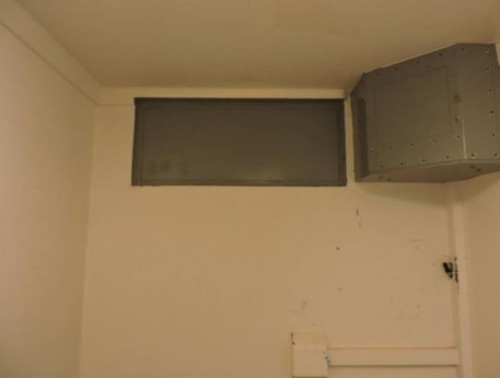 These physical conditions prevent even the minimal verbal and visual contact that some people in solitary manage to make by shouting or gesturing down or across the tier. Even those who are allowed outside visits must conduct them in a cinderblock booth, equipped with a Lexan partition and unreliable electronic devices to speak through. All this means that men held in the SMU have gone years without any human touch, beyond handcuffing by the corrections officers who escort them on their rare trips out of their cells.

Exercise in small outdoor cages is granted only twice per week, for 2.5 hours at a time, forcing individuals to stay in their 7 x 13.5-foot cells for several consecutive days. This is highly restrictive even for segregation units, which almost universally provide some out-of-cell time at least five days a week.

While half of the individuals confined in the SMU are allowed to exit their cells for three 15-minute showers per week, the other 50 percent are instead forced to crouch under shoulder-height spigots affixed to their cell walls and controlled by prison staff. The drains in these cells are often unreliable, resulting in permanent damp and standing water.

Those at the lowest level of SMU’s “Tier III Program”—an incentive program designed to encourage conforming behavior—are denied access to exercise, recreation, personal property, phone calls, and visits. In all his years of research, Haney does not recall ever encountering deprivation at this level in any prison he has visited.

In such conditions, it can be difficult to discern which individuals had entered the unit with underlying mental health conditions, and which have been psychologically devastated by their time in extreme isolation. But the overall result, according to Haney, is that “a shockingly high number of mentally ill prisoners are housed in the SMU.” According to records provided to Haney, 39 percent of prisoners were designated as mentally ill during the time of his investigation—a figure that in Haney’s opinion understated  the true prevalence of severe mental illness in the SMU. 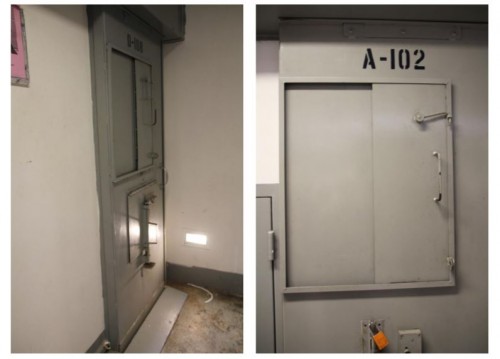 Metal doors with shielded windows to an SMU cell

Each of the 11 individuals Haney interviewed reported ruminations, mental and physical deterioration, hypersensitivity to stimuli, and irrational anger or irritability, among other symptoms. Ten described to Haney chronic feelings of depression, while seven had considered suicide. “Some of the prisoners were among the most psychologically traumatized persons I have ever assessed in this context,” he wrote.

On the SMU’s E Wing—one of the two most restrictive wings in the facility, where exercise, programming, phone calls, and visitation are denied—the situation is even more dire. Haney described the wing as “bedlam-like, as chaotic and out of control as any such unit I have seen in decades of conducting such evaluations,” adding, “When I entered this housing unit I was met with a cacophony of prisoner screams and cries for help.”

At the time of Haney’s visit, 89 percent of individuals confined in the E Wing had mental health diagnoses, with 54 percent suffering four or more diagnosed conditions. More staggering still is the prevalence of self-injury: While the E Wing makes up less than 2 percent of the entire population of the Georgia Diagnostic & Classification Prison, it accounted for 34 percent of the self harm incidents that occurred in the 90-day period preceding Haney’s visit. Despite this, Haney reports that the control both logbook showed that the mental health counselor entered the E Wing only five times in the month of September, totaling only 24 reported minutes on the unit.

Upon arrival to the E Wing, Haney was met with the smell of smoke—the remnants of a fire set during a suicide attempt made just one day earlier. It was the second time in less than two months that this man had cut himself in his cell.

Individuals confined in the E Wing reported to Haney that staff there take a lackadaisical approach to self-harm. This is corroborated by booth officers’ notes, described by Haney to record several instances when a sergeant or officer in charge was alerted by staff to threats and/or claims of self-harm, but failed to attend to the situation.

“I’ve been on suicide watch many times. I can’t take it. They just strip us naked. [You] get no help here. I’ve been in SMU for 18 months… I’ve swallowed batteries three or four times, cut myself many times,” one individual reported to Haney. “The last time they just left me in my cell. I haven’t seen my mental health counselor for months. Even after I tried to kill myself.”

Haney identified two suicides in the unit in 2017, including one in which the body of a man who had hanged himself was “stiff and cold…suggesting that officers had not checked on him in some time.” And on the day that he visited, a man who had attempted suicide had been returned from the infirmary, with a deep gash in his arm, to a cell still spattered with his blood. Haney witnessed the man hanging pieces of toilet paper—which he bloodied in his open wound—on the door flap. 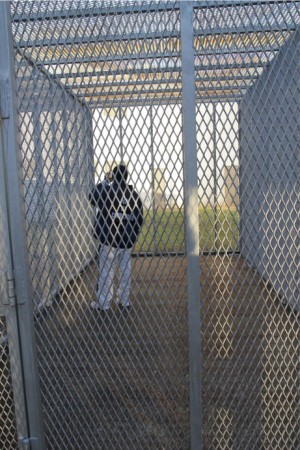 Other individuals held in the SMU worry that even if they survive their time there, they will be permanently scarred by the experience. “I am being driven more crazy, so I won’t make it when I get out,” one interviewee told Haney.

On July 5, the plaintiffs’ lawyers filed a motion for a preliminary injunction from the court that would force the prison to immediately provide more out-of-cell time and meaningful activities, and transfers out of the SMU for people with mental illness. But last week, before the court could rule on the motion, the defendants filed a response claiming that the prison had already taken steps to improve the conditions Haney described in his report.

As evidence of change, the DOC pointed to new mental health units established for treatment in the SMU; customized computer tablets called “Georgia Offender Alternative Learning units” provided to the entire SMU population; and contracts for the installation of 80 “restraint tables” to which men would be shackled for limited group activities. The department also claims that it plans, at some point in the future, to perform mental health evaluations and provide outdoor recreation for all individuals in the SMU for one hour a day on weekdays. Both sides are awaiting the court’s rulings. 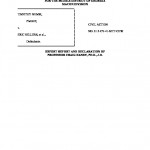 The Georgia Department of Corrections did not respond to requests for comment.