“The degree of civilization in a society,” Dostoevsky famously said, “can be judged by entering its prisons.” U.S. prisons have, for decades, offered a grim enough picture of American civilization. But what might they look like after a few months, or years, of President Donald Trump and Attorney General Jeff Sessions? In particular, what might the election results mean for the tens of thousands of men, women, and children suffering in solitary confinement in U.S. prisons and jails, and for people on both sides of the bars who oppose this peculiarly American form of torturous punishment?

In the past week, sources as diverse as the Marshall Project and the Cato Institute have speculated on how a Trump Administration might affect progress on criminal justice issues, from sentencing reform to police accountability. The prognosis is not positive. When it comes to solitary confinement specifically, a few have pointed to President Obama’s January 2016 executive order banning solitary for juveniles in federal prisons as ripe for rollback, given Trump’s promise to “cancel every unconstitutional executive action, memorandum and order issued by President Obama” on his first day in office.

In fact, Obama’s executive actions on solitary confinement have gone far beyond just removing the small number of children held in isolation by the federal government. Solitary Watch did a detailed analysis, at the time, of the reforms recommended by the Department of Justice and endorsed by the President. We found that the reforms, taken together, would reduce by at least several thousand the number of people held in solitary in federal prisons.

The complete set of federal reforms, some of which have already been implemented, end the use of solitary confinement on individuals charged with low-level, nonviolent disciplinary offenses in prison. They reduce the length of solitary terms for more serious infractions, and for high-risk individuals like gang members who are placed in Special Management Units (SMUs) temporarily to “correct” their behavior. The reforms also call for alternatives to solitary for people placed in protective custody and individuals with serious mental illness. But all of this could be stalled–and even reversed–by Trump.

In addition, Muslim Americans accused of terrorism-related charges, including low-level “material support” charges, have been especially likely to be placed in isolation in federal facilities. Many have spent months or years in pre-trial solitary confinement. Trump’s promise to wage war on what he calls “radical Islamic extremism” in thought as well as deed means the net will surely be cast even wider in the future, possibly filling solitary confinement cells in places like Manhattan’s Metropolitan Correctional Center and Colorado’s notorious ADX supermax. 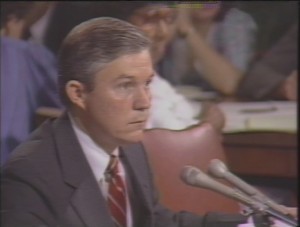 In 1985, Sessions’s nomination for a federal judgeship was voted down by a bipartisan majority of senators based on his past racist comments.

The vast majority of people in solitary are held in state prisons and local jails, out of reach of such executive actions. But the U.S. Department of Justice–and particularly, the Civil Rights Division–has long acted as a check on abuses in state and local systems. Recently, for example, the DOJ conducted an investigation of Pennsylvania’s use of long-term solitary on individuals with mental illness and developmental disabilities, and reached an agreement with the state’s Department of Corrections to institute sweeping changes. Even before today’s announcement of Alabama Senator Jeff Sessions as Trump’s choice for Attorney General, the Civil Rights Division is said to be in a state of high anxiety over the impending transition, and given Sessions’s history of “insensitivity to civil rights,” it is hard to imagine a Sessions DOJ spending resources to protect the rights of the incarcerated.

In addition, under Obama, the DOJ’s Bureau of Justice Assistance has provided funding for states and counties to work with the Vera Institute of Justice’s Safe Alternatives to Segregation project to study and reduce their use of solitary confinement. The Justice Department in January recommended expanding this program; under Trump and Sessions such funding is vulnerable.

Trump has long denounced what he calls “criminals’ rights.” And more broadly, since the widespread use of solitary confinement is driven by mass incarceration, Trump’s general law-and-order stance, which is inhospitable to such moves as sentencing reform, could add to the federal prison population. Sessions, who has a track record on these issues–he virulently opposed recent bipartisan efforts at sentencing reform and wrongly believes that crime is skyrocketing–will certainly have Trump’s back.

Finally, Trump’s pledge to round up undocumented migrants, as well as migrants who have been convicted of criminal offenses, promises teeming immigrant detention centers (and new ones, likely run by private prison corporations), where the solitary confinement is also used. Under Obama, Immigration and Customs Enforcement (ICE) issued a directive intended to limit the use of solitary in immigrant detention, but that directive can be rescinded.

As with most criminal justice reforms in the age of Trump, it will now be up to state and local governments to take the lead in rolling back the use of solitary confinement, as quite a number have already done. Amy Fettig, who is Deputy Director of the ACLU’s National Prison Project and Director of the NPP’s Stop Solitary initiative, told Solitary Watch: “We’re certainly concerned that the DOJ under the new administration will back away from the aggressive enforcement of the civil rights statutes that we’ve seen over the past few years. But there is no question that reform of solitary confinement will continue. There is widespread recognition at the state and local level that solitary confinement is over-used and abused–and that there are better, more humane alternatives that work.”