Kennedy’s comments were made during a House Appropriations Subcommittee hearing on the 2016 Budget Request for the Supreme Court. In response to a question from Arkansas Republican Steve Womack about prison overcrowding, Kennedy made the following statement. (To watch, click on the photo and go to minute 29.) 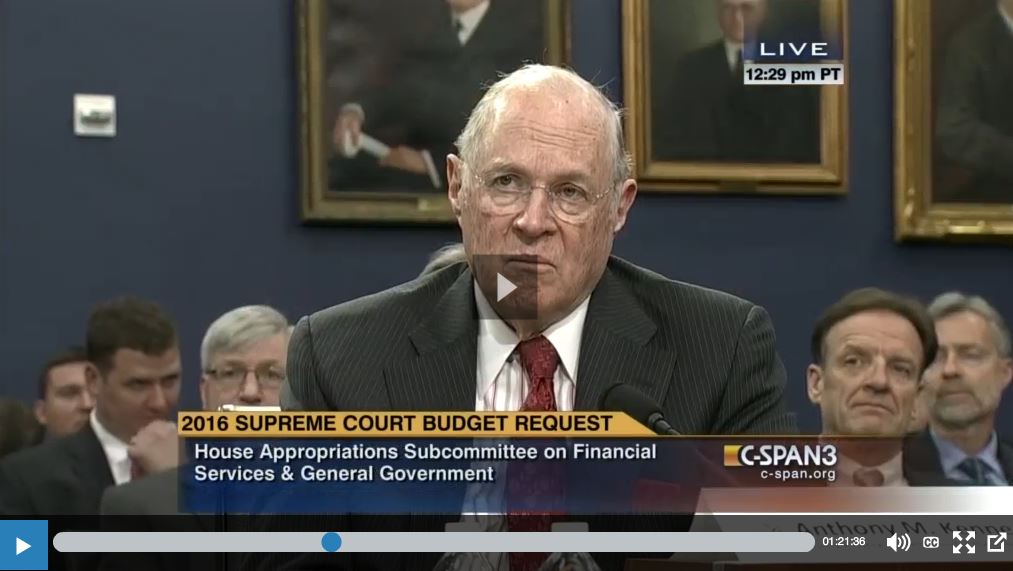 I think that the corrections system is one of the most overlooked, misunderstood institutions—functions—that we have in our entire government. In law school I never heard about corrections. Lawyers are fascinated with the guilt, innocence, adjudication process. And once the adjudication process is over we have no interest in corrections. Doctors know more about the corrections system—and psychiatrists—than we do. Nobody looks at it. California, my home state, had more than 187,000 people in jail, at a cost of over $30,000 a prisoner. Compared that with the amount they gave to schoolchildren, about $3,500 a year.”

And this idea of total incarceration just isn’t working–and it’s not humane. The federal government build—what do they call them—supermax prisons, with isolation cells. The prisoner we had come before our court a few weeks ago…had been in an isolation cell according to the attorney—I haven’t checked it out—for 25 years. Solitary confinement literally drives men mad.

Kennedy then referred to a character in the Charles Dickens novel A Tale of Two Cities, who spent 20 years in isolation in the Bastille.

Even Dr. Manette had his workbench and his cobblers tools in Tower 105 North, and even he lost his mind. We simply have to look at this system we have. The Europeans have systems for difficult, recalcitrant prisoners in which they have them in a group of three or four, and they can stay together with three or four, and they have human contact. And it seems to work much better. But we haven’t given nearly enough study, nearly enough thought, nearly enough investigative resources to looking at our corrections system. In many respects, I think it’s broken.

Kennedy’s most famous tretise on the humane treatment of prisoners came in his majority opinion in the 2011 Brown v Plata case, where he wrote: “Prisoners retain the essence of human dignity inherent in all persons. Respect for that dignity animates the Eighth Amendment prohibition against cruel and unusual punishment.” The Eighth Amendment determines whether a punishment is cruel and unusual based on “evolving standards of decency.” Now it seems that those standards may be evolving in the view of a key voter on the U.S. Supreme Court.