The author of the following piece, K. Kabasha Griffin-El, is currently part of the general population at Pennsylvania’s SCI Greene. In this reflection, Griffin-El describes visiting his brother, Jerome Griffin, whom he hadn’t seen for more than two decades. Griffin-El has been incarcerated for 19 years and experienced solitary confinement firsthand, but nothing prepared him to witness the effect solitary had on his younger brother. He describes the experience as “one of the most difficult emotional bombardments of my life.” Jerome Griffin, 41, has been held in solitary confinement for 22 years following an assault on a corrections officer. Over that time he has developed a number of mental health problems that have only recently been acknowledged by the Pennsylvania Department of Corrections (PADOC).

Earlier this year, the Justice Department released the findings of its investigation into the PADOC’s use of solitary confinement on those exhibiting serious mental illness. Within this document, two case studies are used to exemplify the shortcomings of the PADOC when dealing with mentally ill prisoners, the second of which, involving “Prisoner BB,” is believed to summarize Jerome Griffin’s experience with solitary. Griffin has since been transferred to SCI Pittsburgh where he is confined to a Secure Residential Treatment Unit (SRTU). –Maclyn Willigan 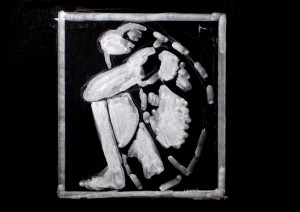 I imagine that it must be difficult for those that haven’t actually experienced it, to understand the ills of solitary confinement. I’ve endured it, so I know that it’s a cold, cruel, inhumane, and torturous methodology that must be abolished. It directly assaults the very being of men and women, often creating mental illness in those victimized by the callous—if not sadistic—practice. It had that horrible effect upon my younger brother, Jerome Griffin. The outrageous experience of witnessing what has become of my brother as a direct result of solitary confinement, compels me to use my words to expose the terrible consequences of that dehumanizing practice, as it’s used deep within the dark, hopeless hideaways of Pennsylvania’s Department of Corrections.

It took several months of diplomacy—making my request to visit with my brother known to a psychologist, counselors, lieutenants, captains, a major, and deputy superintendent. I found myself super excited, anxious, and even a bit worried once authorization was granted. I didn’t know what to expect next. I wondered how my brother would respond to me, if he would be angry for my absence from his life. I just wanted things to go well, so I did my best to prepare for the big day. Soon it was painfully apparent that there was no way to prepare for our time together. No more so than a person could prepare to drown. Once I entered that room, I was in too deep. I choked, and gasped on every sight, on every scent, and nearly every word beyond his initial, “hi brother . . . hi brother.”

You see, on the morning of March 20, 2014, at approximately 9am, I experienced . . . endured . . . and survived one of the most difficult emotional bombardments of my life. Until that time, I hadn’t seen my younger brother Jerome, for approximately twenty-three years. At this point, I’m three months shy of the nineteenth year of my own imprisonment. So although “warned” by prison personnel that it might be a very difficult experience—seeing my brother in his present state of mind—I thoughts that there was nothing that would be too much for me to handle, but it was . . . too much for me to handle.

As I entered the room, smiling on the opposite side, a frail, hairy man stood wearing a bright orange jump suit with a thick, brown leather belt wrapping his waist. A large metal loop attached to the front was somehow connected to the handcuffs that securely clutched his writs, locking his hands in front of him, right at his lower stomach. A customized cage separated us, splitting the room horizontally, evenly cutting across a table of sorts that sat off to the left side of the room. A single dirty beige plastic chair sat on each side of the dimly lit . . . depressing hole in the wall. There was a small cutout in the cage (likely used by Attorneys to pass legal documents through during legal visits).

“Hi brother! Hi brother!” Those were his first words to me—the first time that I had heard his voice in at least twenty-three years. Immediately, I knew something was wrong . . . his words, although beautiful, sounded as if they were flowing from the lips of a young child. But this was a “grown man,” speaking through extremely dry, flaky, painful looking scaly lips. Politely, I returned his greeting, but I didn’t recognize him . . . standing there with his would be afro, that was nothing more than mounds of foul smelling, filthy matted hair. His face too was full of wiry patches of hair, unkept, and merely sprouting from his face like wild weeds. The huge smile upon his face revealed at least three missing upper teeth, dead-center of his mouth. His bottom teeth were obviously rotting away. The rotting ones slightly darker than the other orangish, yellowish-brown, darkly stained teeth that survived whatever happened through the years.

I recall the fleeting thought that perhaps I was in the wrong room . . . “this brotha couldn’t be my brother.” But he was. As our conversation continued, I quickly realized that my brother wasn’t all there, but he wasn’t all gone either. He remembered much from our childhood (the names of neighbors, family members and childhood friends). It was apparent that he had consumed and digested much from books, letters, and stories that others had shared with him through the years. Like a mental alchemist, he mixed each of those experiences with his imagination, creating his very own version of reality. He spoke of his expensive clothing, houses, and cars—clothing, houses, and cars he never had. He spoke of his days in the Marine Corps, and he (now at age forty-one) has been in some form of lock up since the age of thirteen. The terrible truth is that for the past twenty-two years, Jerome has been subjected to the agonizing cruelties of solitary confinement—kept locked in a prison cell for at least twenty-three hours each day.

Seeing my brother in his present state of mind . . . I wanted to run out of that room. I wanted to scream and yell, “WHAT HAVE Y’ALL DONE TO MY BROTHER?” I wanted to destroy something. I wanted to tear down that cage between us, grab my brother and urn out of that hellish place. Yet, I knew that wasn’t possible. I resisted the urge to correct his fantasies. I didn’t dare tell him that he was never married, that he had no children, and that he never owned a house or car. I fought back my tears; choked on my emotions, and nearly gagged on the stench of his body. Outwardly I remained calm, strenuously hiding my outrage . . . my pain, until he started muttering, trying to say something that simply made no sense. That happened frequently. Then, seemingly out of nowhere, he cried out, “oh my god, Jesus f—ing Christ.” It happened a few times as if he had Tourette syndrome. The storm of emotions that I fought so desperately to suppress, swell in my chest, rose up and before I could catch myself, escaped my lips as a whimper.

Rationally, I was fully aware of the appalling truth that I was experiencing (the joyous moments, pain, anguish, outrage), all of it was due to grace. No one had to allow my brother and I to visit with one another. My request could have been denied. Fortunately for us, on that day we were graciously granted two hours to express our loving concern for one another. I spoke with my brother, hopeful that he could fully understand as I opened my heart saying, “I love you brother. I’m so sorry that I wasn’t here to support you earlier.” “It’s all right. It’s all right. I’m fine. I’m fine. It’s about me and you. I’m happy. I’m just happy.” Those words rushed out of his mouth as if they were prepared in advance and waiting on the tip of his tongue. We were locked in each others eyes at that time, and nearly throughout the entire visit. He watched my every move, just as I watched his. Before we parted—just as I had done several time during the visit—I reached through that small cutout in the cage. “Let me touch you brother.” Once more he smiled at my request, leap to his feet, and did his best to shove his bound hands in my direction. Reaching further in, I grabbed his hands, and held them.