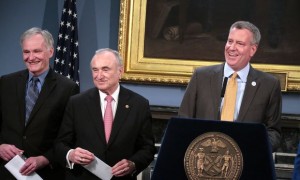 In March, New York City Mayor Bill de Blasio appointed reformer Joseph Ponte as the Commissioner of the Department of Correction. In his last post, overseeing Maine’s Department of Corrections, Ponte gained particular renown for reducing the use of solitary confinement by over 60 percent. In fact, the changes he helped bring about in Maine will be a central element of a new Frontline documentary, entitled Solitary Nation, due to air tonight on PBS.

Given the rapid increase in the use of solitary confinement on Rikers Island in recent years – and the vocal community opposition to the practice — DeBlasio’s decision seems a timely one. But his appointment has been met with controversy, sparking outrage amongst the City’s correctional officers’ union. And a more detailed look at Ponte’s tenure in Maine reveals that even the most open-minded of institutional insiders have their limits when it comes to real change.

Joseph Ponte first began working in prisons as a guard at the age of 22. In the 45 years since, Ponte has served in institutions across the country, including Walpole State Prison near Boston and the Shelby County Jail in Memphis.  He was even previously employed by the Correctional Corporations of America (CCA), a company that has gained notoriety for turning a profit by locking people up.

Although Ponte has been credited with turning around several institutions, he is best known for the reforms he instituted in Maine. As was recently reported by The New York Times, “Within months of arriving [in Maine], Mr. Ponte cut the population in solitary confinement at Maine State Prison from about 100 to fewer than 50 and the average stay there from 90 days to two weeks.”  He mandated that inmates not be placed in isolation for more than 72 hours without his personal approval and even abolished disciplinary segregation – requiring corrections staff to use “informal sanctions” like taking away recreation rather than throwing noncompliant individuals in “the hole.”

While at the helm of Maine’s Department of Corrections, Ponte also drastically reduced the state’s use of “cell extractions.” “Disobedient” men in isolation had previously been dragged out of their cell with pepper spray, beaten and tied down for hours, as captured on film in a 2005 expose.Ponte almost completely abolished the practice of placing adolescents in solitary.  He also garnered praise for allowing prisoner advocates and the media into Maine’s prisons, and enabling them to speak to incarcerated individuals without corrections officers present.

Ponte’s reputation for sharply reducing the use of solitary confinement has provided hope to the prison activists and advocates who have been working to change conditions on Rikers Island. Megan Crowe-Rothstein is a member of the Jails Action Coalition (JAC), a group campaigning to promote human rights inside New York City’s jails.  She told Solitary Watch, “The appointment of Commissioner Ponte is exciting because it shows that our city government understands the need to address the widespread use of this brutal practice [solitary confinement] in our jails.”

In an e-mail to Solitary Watch, Dr. Bobby Cohen said, “As a member of the Board of Correction (BOC) and as citizen of NYC I am very hopeful that Commissioner Ponte’s appointment signals a substantial change from the policies of the Bloomberg administration.” The BOC oversees the city’s correctional facilities to ensure compliance with minimum standards of care.

Not everyone is so happy with Ponte’s appointment, however, particularly not the man who heads up New York’s union for prison guards, the Correction Officers’ Benevolent Association (COBA).  A few weeks after Ponte’s appointment, President Norman Seabrook held a press conference to criticize the incoming commissioner.  He lambasted what he termed Ponte’s “claim to fame in Maine” – abolishing the use of solitary as punishment for disciplinary infractions.  “Punitive segregation is an effective tool that works.” He added, “We don’t need a reformer… We need law and order. We don’t need someone to come in here and tell us, ‘Well, this is how we do it in Maine.’ Well, guess what, welcome to New York City. This is not Maine.

Ponte is no stranger to fighting the unions to implement his reforms; when he was in Maine the CO union staunchly opposed his efforts. As Solitary Watch documented in an article published last year, union opposition to reducing the use of solitary confinement is actually a common trend across the nation.

Several prison activists and formerly incarcerated individuals in Maine have critiqued Ponte from a different angle. Although all praised Ponte for the changes he instituted and for his willingness to meet with them and other Maine DOC critics, they also stated that Ponte’s tenure was far from perfect, and his reforms remain incomplete.

Judy Garvey is a board member of the Maine Prison Advocacy Coalition (MPAC), a group that campaigns for more humane conditions on the inside.  “[Ponte] chose to leave the prison staffing-administration ‘good ol boy’ system basically intact, or was not able to dismantle it,” she told Solitary Watch. “The unions — not as strong here as in New York City — were against him, unfortunately, yet there was much more that could have been done to eliminate historically abusive staffers.”

Garvey and other prison advocates in Maine also point out that Ponte brought in US C-SOG, a private special-ops contractor, to corrections officer in methods of riot control. Now, according to one activist, “units of Maine guards parade in military-type garb carrying automatic weapons,” and also carry more “non-lethal” weapons, including stun guns, flash and bang instruments, rubber bullets, mace and pepper spray. Under Ponte’s tenure, the double-bunking has also greatly increased.

Joseph Jackson is MPAC’s assistant coordinator. He spent twenty years behind bars in Maine, and worked with Ponte to institute reforms both while he was inside and since his release. While the solitary reforms instituted by Ponte show no signs of increasing prison violence, the same may not be true of his other changes. The militarization of CO culture, plus the increase in double-bunking, has created a more “stressful environmenton the inside, he says, especially for men serving long sentences. Jackson pointed out that there have been four prisoner deaths in Maine in the last five years, whereas “prior to [Ponte] coming on was one in the last 19 years.”

COBA’s Norman Seabrook takes the opposite position, arguing that any increase in violence in Maine is proof that Ponte’s “soft” approach to prisoners doesn’t work. “A correction officer or an inmate will die at the hands of an inmate in the Department of Corrections really soon… And it’s going to be on the steps of City Hall that I deliver that body,” he said at the recent COBA press conference. Rikers has also been struggling to cope with a surge in violent behavior, which seems not to have been helped by the dramatic increase in solitary cells under Ponte’s predecessor, Dora Schriro.

Ponte may have faced insurmountable barriers in solving the safety problem. According to Lance Tapley, who has long covered the abuses in Maine’s prison system for The Portland Phoenix, Ponte increased double-celling because of budgetary constraints.  Between 2009 and 2012, expenditure for Maine’s state prison decreased by about $9.2 million.

Another underreported aspect of Ponte’s time in Maine is the role MPAC and other activists played in pushing the state to institute reforms.  According to an article published in 2011 in The Crime Report: “Ponte and his committee guiding the reforms have as their playbook a bold report commissioned last year by the legislature at the behest of these activists. The report resulted from a study of solitary confinement that legislators ordered as a substitute for a bill they defeated that had been pushed by prisoner-rights, civil-liberties, religious, and mental-health groups. The bill would have greatly restricted the use of isolation.”

For activists, Ponte’s tenure may demonstrate the pitfalls of introducing partial or ad-hoc changes in place of wholesale reforms or the outright abolition of solitary. Ray Luc Levasseur was born and raised in Maine and has been involved in prison justice organizing for decades.  (He is also a former political prisoner who spent more than 15 years in isolation).  In an email to Solitary Watch, Levasseur explained: “[Ponte] delegated the ultimate authority to himself to decide who remains in solitary and for how long. MPAC initiated and supported legislation to curb use of solitary confinement but the bill was rejected in the state legislature.  Had the bill passed, the reduction of solitary confinement would have had the force of law behind it.  Ponte will be replaced by another person and it’s any guess what he or she will do.”

Levasseur’s insights are especially timely given the recent introduction of the Humane Alternative to Long-Term (HALT) Solitary Confinement Act into the state legislature.  If passed, the bill would virtually ban the use of isolation beyond 15 days across New York State’s prisons and jails—including Rikers Island. At the city level, the Board of Correction is also working on new regulations that could also bring significant changes to the practice of solitary on Rikers.

With Ponte in office for just a few weeks, it is yet to be seen how his appointment will change the landscape for those on all sides of the solitary confinement debate.  From Maine, Judy Garvey pressed those on all sides to give Ponte a chance: “MPAC wants Joe Ponte to succeed in New York, as the plight of those living on Rikers Island is a tragedy of unspeakable proportions that affects every New York citizen.  MPAC doesn’t want to unintentionally provide fuel to the predictable knee-jerk reactions by the New York City union and undermine what Ponte might be able to do.  They should take a deep breath and give Joe Ponte a chance since he can actually improve their working conditions.”