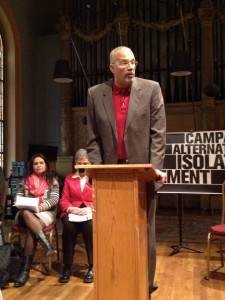 “I’m here in a steel coffin,” Jessica Casanova’s nephew wrote to her from an isolation cell. “I’m breathing, but I’m dead.” Her nephew, she said, “has never been the same” after spending time in solitary confinement, and his experience compelled her to speak out for the thousands held in extreme isolation in New York’s prison and jails.

Casanova was one of half a dozen speakers at a press conference held on Friday to announce the introduction of a bill in the New York State legislature that would virtually end the use of solitary and other forms of isolated confinement beyond 15 days. The bill, called the Humane Alternatives to Long-Term (HALT) Solitary Confinement Act, aims to bring sweeping reform to a state where nearly 4,000 people are held in 22-to 24-hour isolation on any given day in more than 50 prisons, with at least a thousand more in solitary in local jails.

Activists from the New York Campaign for Alternatives to Isolated Confinement (CAIC), which hosted the press conference and worked with the sponsors to draft the bill, encouraged those arriving for the mid-morning event at Greenwich Village’s Judson Memorial Church to try samples of “the Loaf.” The dense, bread-like substance, made from flour, milk, yeast, grated potatoes and carrots, is served with a side of raw cabbage as an additional form of punishment for those held in solitary confinement in New York’s prisons.

Introducing the speakers, Claire Deroche of CAIC and the National Religious Campaign Against Torture called the bill “the most comprehensive and progressive legislative response to date to the nationwide problem of solitary confinement in our prisons and jails.” In addition to placing a 15-day limit on solitary, the bill would create new alternatives for those deemed a longer-term safety risk to others, replacing the punishment and deprivation of New York’s “Special Housing Units” (SHUs) with a more rehabilitation-minded approach.

The bill is being sponsored in the Assembly by Jeffrion Aubry (D, Queens), called solitary confinement “an issue whose time has come.” Aubry, who also sponsored the 2008 SHU Exclusion Law, which limited the use of solitary on individuals with serious mental illness, said it was time to set standards for treatment of all people in prison, regardless of their offenses. “I don’t believe that having committed a crime suspends your human rights” said Aubry. “That’s not the America I want to live in. That’s not the New York State I want to live in.”

The legislation’s Senate sponsor, Bill Perkins (D, Harlem) pointed out that solitary is increasingly being seen as a “moral issue” and a “crime against humanity.” The 15-day limit set by the bill conforms to recommendations made by UN Special Rapporteur on Torture, Juan Méndez, but far surpasses restrictions currently placed on solitary in any American prison system. Perkins expressed his hope that the bill would find supporters in both bodies of the legislature, and that “the governor will work with us.”

New York City Council Member Daniel Dromm, who has supported measures to limit solitary confinement in city jails, described seeing a friend deteriorate after being placed in isolation on Rikers Island. The friend, whom Dromm described as “the gentlest person in the world,” was also “bipolar and drug addicted,” and was placed in solitary for five months for “cigarettes and talking back.” The HALT Solitary Confinement Act would ban the use of isolation altogether on vulnerable populations, including youth, the elderly, and people with mental or physical disabilities.

Five Mualimm-ak began his statement by telling listeners: “I lived five years of my life in a space the size of your bathroom.” Mualimm-ak, who said he never committed a violent act in prison, was given stints in solitary for offenses as minor as “wasting food” by “refusing to eat an apple.” The Department of Corrections “uses the rules for the purposes of abuse,” he said. “New York State should be a leader” when it comes to prison conditions, said Mualimm-ak, who has been out of prison for two years and is working against what he calls “solitary torture.” Instead, New York state prisons and city jails practice isolated confinement at levels well above the national average.

Wrapping up the event, Scott Paltrowitz of the Correctional Association of New York and CAIC outlined the major provisions of the HALT Solitary Confinement Act. In addition to banning special populations from solitary and setting a 15-day limit for all others, Paltrowitz said, the bill would eliminate the use of isolation to punish minor offenses, such as “having too many postage stamps or talking back to a guard.”

The bill would also create secure “residential rehabilitation units (RRUs) for those who need to be separated because they pose a genuine danger to the general population. RRUs would be “aimed at providing additional programs, therapy, and support to address underlying needs and causes of behavior, with 6 hours per day of out-of-cell programming plus one hour of out-of-cell recreation.” The legislation, said Paltrowitz, “recognizes that we need a fundamental transformation of how our public institutions address people’s needs and behaviors, both in our prisons and in our communities.”

CAIC describes itself as joining together “advocates, formerly incarcerated persons, family members of currently incarcerated people, concerned community members, lawyers, and individuals in the human rights, health, and faith communities throughout New York State.” According to its website, the group considers solitary and all forms of prison isolation to be “ineffective, counterproductive, unsafe, and inhumane,” and cites evidence showing that solitary confinement increases recidivism while failing to reduce prison violence.

The legislation, drafted over the past year, is more ambitious and far-reaching than bills on solitary that have been introduced in other states. As a result, it is unlikely to pass in anything resembling its current form–but supporters are determined to push forward. “The HALT Solitary Confinement Act implements rational humane alternatives to the costly, ineffective, and abusive use of long-term solitary confinement in New York prisons and jails,” said Sarah Kerr of the Legal Aid Society’s Prisoners’ Rights Project, who helped draft the legislation. “The need for reform is well-documented and the time for change is now.”

The New York State Department of Corrections and Community Supervision (DOCCS) did not respond to a request for comment on the legislation.