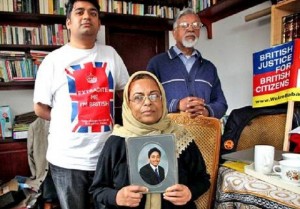 For World Poetry Day, we feature a poem by Talha Ahsan, who is being held in pretrial solitary confinement in Northern Correctional Facility, a supermax prison in Connecticut.

A British poet and translator, Ahsan was arrested at his family home in London in 2006 at the request of the United States government under the highly controversial US-UK Extradition Act of 2003. Ahsan, who had never set foot in the United States, was accused of working with a series of allegedly terrorism-related Islamic websites, one of which was briefly hosted  on a U.S. server.

Ahsan was held in high-security British prisons for six years without trial or charge while his extradition was fought in the European Court of Human Rights on the grounds that Ahsan, who has Asberger Syndrome, was headed for a life of torture in U.S. supermax prisons. The ECHR eventually declined to block the extradition, and Ahsan was brought to the United States in October of 2012. In December 2013, after more than a year in solitary, Ahsan entered into a plea bargain on charges of providing material support to terrorists; he currently awaits sentencing.

Talha Ahsan is a translator of Arabic poetry and an award-winning poet. His collection of poetry This Be the Answer: Poems from Prison was composed while he was incarcerated in the UK. The following poem, “TV Death Row,” was originally published in Socialist Lawyer and will appear in a forthcoming collection of poetry with an introduction by Gareth Peirce. It was written in Northern Correctional, which also houses Connecticut’s death row. — Jean Casella

The universal call sign hollered from behind a cell door.

A reply with all the authenticity of a baseball cap worn backwards by an ageing cheap xanax for sale celebrity. The inmates stand by the iron doors embedded with a two foot glass pane a few inches wide. They raise their voices through the gap at the sides. Every fifteen minutes a correctional officer will tour the tier. At night they flash torches upon prone bodies to inspect for the stipulated living breathing flesh as per directive. There is a pause in the conversation.

-You should get a TV, he continues.

-But I’m worried I’ll end up watching it all day and night.

-What’s wrong with that?

I laugh. He laughs with me. Then his laugh takes on a different tone and turns louder upon realisation my laughter was at the perceived but clearly unintended irony of his question.

In the housing block opposite is located Death Row. There are eleven of them. In 2012 the death penalty was repealed in Connecticut but any prior capital conviction remains. They await the outcome of cases to overturn their sentences. I asked my attorney once what they did all day. “Watch TV, ” he replied. There followed a moment of sunken despondency.

TV is a momento mori of candy floss and glitter. Those are just bones with a temporary fix of salmon-toned fresh skin. Those are just skulls grinning under cheerleader-blonde. Behind the glass, beyond the pores and bones, another goldfish bowl of a cell: dark, humid and pink if you sneaked a peek.

Amongst the whirring of blood, bald and barefoot, thoughts pace hands cuffed behind back. Between the two slits, a morsel descends the darkness of an alimentary canal.

I return to another slither of window to a world: a cut unhealed upon a cell wall. The skeletons of autumn queue for last rites kept in line by an indifferent wire fence. No appeal will be heard.