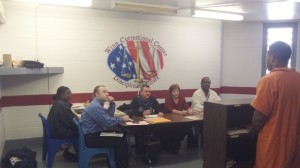 Presumably spurred by the growing attention to solitary confinement, Corrections Corporation of America has produced a promotional piece on how it is “strategically serving” those it places in solitary. The article, which appeared recently in the companies online publication InsideCCA, claims that the company is “Thinking Outside the Box” when it comes to the use of isolation in its prisons and detention centers.

CCA is the nation’s largest private prison contractor (or, as the company’s website puts it, “America’s leader in partnership corrections”) with nearly 100,000 beds in more than 60 facilities. No figures are available on how many individuals CCA holds in solitary confinement, but the company claims it employs “segregation” only as “a last resort.”

The article quotes Harley Lappin, the former head of the federal Bureau of Prisons who resigned following a DUI and quickly resurfaced as “chief corrections officer” at CCA.  “During my time at both the Federal Bureau of Prisons (BOP) and at CCA, we advocated using segregation only for situations that warrant the need to separate someone from the general population…There’s been a concerted effort on the part of corrections administrators across the country – at CCA and elsewhere – to implement better practices and policies and reduce the number of inmates in segregation.” In fact, the number of individuals in solitary and other forms of isolated confinement grew during Lappin’s tenure at the BOP, to at least 12,000.

John Baxter, CCA’s vice president for health services, calls solitary “the last in a series of tools we have available to help [inmates] regain control of their escalating negative behavior.” The article acknowledges that CCA holds individuals with mental illness in solitary confinement, but claims it provides all the services they need. At Winn Correctional Center in Louisiana, for example:

While in segregation, offenders who have mental illnesses continue receiving special care; Mental Health staff check in with them on a weekly, monthly or quarterly basis, depending on the level of attention they need.

“The unit teams know inmates very well, and if an inmate misses his medication or if he’s asleep and supposed to be taking his medication, they remind him or wake him up,” [Assistant Warden Nicola] Walker explains.

And to make sure no needs go unnoticed, the facility holds weekly review hearings in which the entire classification team, the unit manager, chiefs and assistant wardens meet with each inmate in segregation and give them a chance to express any concerns they may have. Then the Mental Health team meets individually with those who express concerns.

The article includes a particularly disturbing photo, of an incarcerated man standing before a “Disciplinary Court” where five employees of a private, for-profit company decide whether to place him in solitary confinement, in conditions that federal courts have acknowledged as a significant deprivation of the liberty guaranteed by the U.S. Constitution.