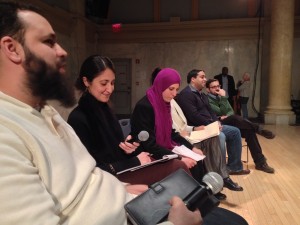 This past weekend, activists across the country and around the world marked the 12th anniversary of the arrival of the first prisoners to the U.S. military detention center at Guantanamo Bay. Detainees there have endured numerous forms of torture, including waterboarding, “stress positions,” prolonged solitary confinement, and force-feeding, as well as indefinite detention without trial, and many advocates have pressed for their immediate transfer to the United States and to the federal civilian justice system.

But not everyone believes that the torture and injustice will end if Guantanamo shuts its doors. Last Tuesday, members of a new campaign called No Separate Justice held a launch event in New York City. The campaign focuses exclusively on exposing the civil and human rights abuses in “War on Terror” cases prosecuted on American soil–abuses that are almost always directed against Muslims.

The campaign will center around four core areas: conditions of confinement (including extreme solitary confinement and deprivation); fair trial and due process concerns (like the classification of evidence held against detainees, even those being charged); First Amendment and material support charges (notably the use of “preemptive prosecution” based on individuals’ perceived political activities or beliefs); and surveillance and entrapment (through “sting” operations that actually persuade individuals to conspire to illegal acts).

On the night of the launch the auditorium at Judson Memorial Church in Greenwich Village was packed despite the bitter cold. Brooklyn College Professor Jeanne Theoharis opened and moderated the evening, stepping in for journalist Liliana Segura, who had lost her voice. Theoharis urged audience members to break the silence about what Muslims face when they are charged in U.S. courts. “We know that most of the greatest injustices in American history have been legal.”

Theoharis’s close involvement in the campaign was sparked by personal experience. In 2002 she taught a student named Fahad Hashmi; five years later he was arrested in London and extradited to the United States. Hashmi was charged with conspiring to provide material support to terrorists, because an acquaintance who stayed in his apartment for two weeks had sent sock and rain ponchos to al Qaeda.

Held for nearly three years in pre-trial solitary confinement, Hashmi eventually entered a plea and was sentenced to 15-years, which he is serving at the notorious ADX supermax prison in Florence, Colorado. For about four years after his extradition, Theoharis explained, Hashmi also lived under Special Administrative Measures (SAMs), which severely restricted his communication with the outside world. (For example, he was under 24-hour electronic monitoring, even when he was showering or relieving himself.)

Fahad Hashmi’s brother, Faisal, spoke next and reflected on the day his brother was extradited back home to the United States.  “This is the day our understanding of America changed.” Given the brutal circumstances of his pre-trial confinement, the plan to use an “anonymous” jury, and the fact that over 99 percent of Muslims charged with terrorism offenses are convicted, Fahad Hashmi had little choice but to ultimately plead guilty.

Pardiss Kebriaei, a Senior Staff Attorney at the Center for Constitutional Rights (CCR), described how strange it was to visit Fahad Hashmi at ADX Florence after the years she’d spent seeing clients at Guantanamo Bay.  Even within the mainstream, Guantanamo has been marked as extraordinary, extreme, the zone of exception. Conversely the federal supermax has usually been ascribed a kind of normalcy, despite the fact that prisoners there spend 23 hours a day in small concrete cells and the remaining hour alone in a concrete exercise pen. Once inside ADX, Kebriaei saw the chaos hidden from public view: “If you could see through the walls you’d see 400 people in rooms the size of bathrooms beating their heads against the walls”.

Next, Tamer Mehanna moved the audience with a plea for empathy for the affected families. “Think of someone you love… Now imagine you will never kiss or hug them again. That’s what we all live with”.  His brother, Tarek Mehanna, is serving 17 ½ years for translating and posting what authorities said was al Qaeda propaganda. The ACLU, CCR, and others continue to maintain that Tarek’s alleged offenses were protected by free speech, but this past November, Mehanna’s conviction was upheld by a federal appeals court.

Sonali Sadequee’s brother, Shifa Sadequee, is also locked up. While he was in Bangladesh in 2005, just twelve days after his wedding, he was surrounded by men who whisked him away. “After he was arrested, that was it. We didn’t even know who took them away or why.” They learned on CNN that Sadequee was facing extradition to the United States to face conspiracy charges. He was in pre-trial solitary confinement for over 1,300 days and is now serving 17 years in the special Communication Management Unit, made up almost entirely of Muslims, in the federal prison in Terre Haute.

Sarah Khasawinah spoke on behalf of Ahmed Abu-Ali, who is currently serving a life sentence at ADX based on a confession coerced through torture by officials in Saudi Arabia, where he was studying at the time. Abu-Ali also endures 23-hour solitary confinement and still lives under the weight of SAMs, which even prevent his family from repeating anything he says – like how he’s been doing.  He is contained in a cage of steel and concrete where even his echoes – the words he tells his family through the glass partition – are proscribed and disappeared by the courts.  As Sarah said, “It’s up to us to be his voice.”

Finally, Tarek Ismail, a Counterterrorism and Human Rights Fellow at Columbia University, provided an overview of the way terrorism cases are pursued in the domestic criminal justice system – including pre-arrest due processes issue like surveillance, entrapment, and the recruitment of informants.  It is as though the tactics developed by the FBI and police forces during COINTELPRO have been perfected under the War on Terror: communities ripped apart by mistrust; political activists slandered and framed; and potential allies driven away by racist propaganda.

This launch is merely the first of many events for No Separate Justice.  The campaign will be holding monthly vigils on the first Monday of every month in front of the Metropolitan Correctional Center (MCC) in Manhattan. This is where Fahad Hashmi was held for nearly three years in pre-trial solitary confinement and others continue to endure extreme isolation. NSJ campaigners hope that such a “physical presence [at MCC] will help make visible what’s been made invisible and normal” to New Yorkers and Americans at large – and thus help expose the horrors of our “domestic black sites.” The first vigil is scheduled for February 3 at 6 pm at 150 Park Row.

The campaign has also launched a website, Twitter feed (@NSJCampaign), and Facebook page, and Educators for Civil Liberties is curating a related series of articles in an ongoing collaboration with The Nation magazine.