How Many People Are In Solitary Confinement in California's Prisons?

With the considerable attention focused on solitary confinement in California, Solitary Watch has observed inconsistent and widely varied statistics provided on the number of individuals housed in solitary in the state. We have reviewed and compiled statistics reported monthly by each prison through the California Department of Corrections and Rehabilitation’s (CDCR) COMPSTAT reports (Computer Statistics or Comparative Statistics), which CDCR publicly releases.

What follows is a presentation of the most recent set of data that may be of interest to Solitary Watch readers. Excluded is the California Rehabilitation Center (CRC), which reported faulty numbers to COMPSTAT. As CDCR began its reforms of the SHU in October 2012, we are comparing and contrasting data from October 2012 to September 2013, the most recent set of data.

CDCR does not officially acknowledge the use of “solitary confinement” as a term or concept, and so COMPSTAT does not reflect “solitary confinement.” Instead, CDCR reports “single-cell” housing. A relatively broad designation, it means people may be single-celled voluntarily or involuntarily. They may be housed in segregation units (SHUs, ASUs) or in general population.  They may be on single-cell status because they’ve committed a rules violation (e.g. murder, assault) or for their own protection. Further, they may be housed on single-cell status for days or years at a time.

Given this, there is considerable variation in the circumstances that constitute single-cell status, but it is the closest researchers can come to what would be called “solitary confinement.”

First, a chart presenting the number of individuals on single-cell status at each facility, in October 2012 and September 2013:

Number of individuals reported in COMPSTAT October 2012 and September 2013.

Most significantly, this reveals, among other things, a dramatic drop in the use of single-cell housing at Calipatria State Prison, which has long served as a holding facility for California prisoners awaiting transfer to a SHU facility. Meanwhile, it appears that other state prisons have been fairly consistent in their use of single-cell housing, particularly the maximum security facilities (the first nine presented in the chart).

California’s use of long-term solitary confinement came to international attention this past summer with a two-month-long hunger strike that began with the participation of 30,000 people in prisons across the state, and ended with 40 hunger strikers who refused meals for 59 days. The most recent hunger strike was a continuation of two statewide hunger strikes that took place in 2011, which began in July and September, respectively, and each lasted three weeks.

At the heart of the hunger strike were the “five core demands” which centered around conditions in the Security Housing Units (SHU), where prisoners suspected of gang affiliation have historically been housed for indeterminate terms until they either complete their prison sentence or snitch on their prison gangs. With meaningful and constructive programming few and far between, those housed in the SHU are typically kept in small cells for 22.5 hours a day, if not the whole day. Those housed in Pelican Bay State Prison’s SHU are generally housed in solitary confinement, as the California Department of Corrections and Rehabilitation (CDCR) insists they are the worst of the worst. 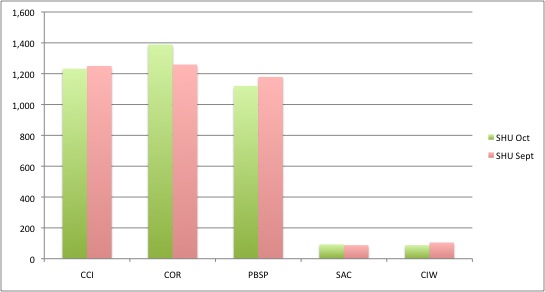 SHU Populations In October 2012 and September 2013 reported through COMPSTAT.

As previously mentioned, CDCR implemented reforms to SHU policy in October 2012. CDCR redesigned the criteria for being designated a Security Threat Group (STG, or prison gang) member or associate, designations that previously led to indeterminate terms in the SHU. CDCR claims that its revised criterion are more behaviorally based and thus greater weight is put on actual rather than suspected prison gang activity. Further, CDCR created a Step Down Program (SDP) that hypothetically allows individuals to transition out of the SHU and back into general population through a six year program. Through the SDP, people could either be held in the SHU for theoretically indefinite terms or as little as one year. As part of these reforms, CDCR announced that it was conducting case-by-case reviews of all those in the SHU for gang affiliation to determine whether they should be housed in the SHU at all and if so, what step of the SDP they ought be placed in.

According to an October 2013 press release, CDCR had conducted 528 reviews of SHU prisoners. Of them, 343 were approved for placement in either Step 5 of the SDP (placement in a maximum security facility, though not in the SHU) or general population. An additional 150 were placed in different phases of the SDP. The remaining 35, according to CDCR, are retained in the SHU for their own protection. CDCR has told Solitary Watch that these individuals are generally gang members who have renounced their gang affiliations and thus must be protected from possible retaliation.

When these reform began in October 2012, there were 3,923 individuals in Security Housing Units: 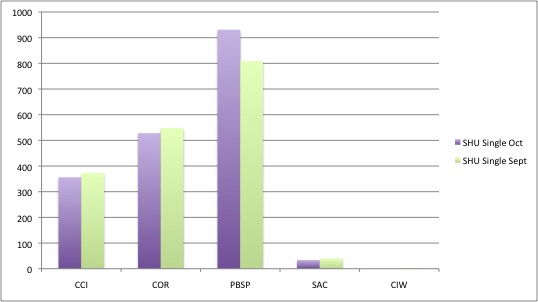 Number of SHU individuals on single-cell status in October 2012 and September 2013.

Over the course of a year, the number of people in the SHU was reduced by only 42, with 77 fewer SHU individuals on single-cell status.

Administrative Segregation Units (ASUs) serve a number of functions and are in existence at all prison facilities. People may be placed in ASUs during an investigation, for their own protection, or to serve short-term segregation terms for disciplinary purposes. As ASUs are supposed to serve as temporary housing units, some ASUs are notably lacking in programming opportunities for prisoners housed in them.

First, a chart on ASU population by prison illustrating the wide variation in use of ASUs.

ASU Population as reported through COMPSTAT in October 2012 and September 2013.

ASU single-cell population reported through COMPSTAT for October 2012 and September 2013.

Solitary Watch has previously reported on notable exceptions to the “temporary” aspect. Earlier this year, women transferred to Central California Women’s Facility (CCWF) following the re-purposing of Valley State Prison for Women to serve as a male facility (now, Valley State Prison) with enemy concerns were housed in ASUs for their own protection. Despite not doing anything wrong, they spent months in ASUs, including on single-cell status, treated the same as individuals placed in the ASU for violence and other rules violations.

In addition, ASUs commonly serve as housing units pending transfer to the SHU or as overflow units to house SHU-status prisoners. Solitary Watch has received an essay from one former Calipatria State Prison ASU prisoner who spent 22 months in the ASU. Further, conditions in ASUs, particularly in the context of long-term solitary confinement, can and have been associated with suicides. This year, Dr. Raymond Patterson, a court-appointed suicide prevention consultant to CDCR, reported that 40 percent of the first 15 suicides in 2012 took place in ASUs. A further 9 of 34 suicides (26 percent) in 2011 took place in ASUs. Solitary Watch has previously reported on the suicide of Alex Machado in Pelican Bay State Prison’s ASU in 2011. Machado had a history of suicide attempts and was extensively documented to be suffering from hallucinations, paranoia, and panic attacks.

Fortunately, COMPSTAT provides some glimpses into how long people spend in ASUs. A chart generated by Solitary Watch of the average ASU terms in October 2012 and September 2013:

Breakdown of the average lengths of stay in ASUs prisons reported in October 2012 and September 2013.

As can be seen, ASU terms vary  from institution to institution. What can also be observed is that the average stay at in the ASU can last for months at a time. California State Prison, Centinela has the longest average length of stay of 188 days, or just over six months in “temporary” segregation units. As previously discussed, the temporary nature of ASUs mean that they come with limited programming opportunities. As a result, spending months in ASUs not only means spending months in segregated confinement with relatively little to do, but also months without constructive, productive programming.

Unfortunately, the COMPSTAT data does not provide the average length of stay for people housed in single-cell housing in either general population or either of the two types of segregation units presented here (SHU, ASU).

There are a few takeaways from this data.

Third, some prisons seem to have taken more significant reductions in their use of single-cell units and segregation units. Whether this is due to greater use of alternative sanctions or some other factor is also unclear.

We also don’t know whether there is any association between increased use of single-cell units and lower institutional violence. CDCR itself admitted in a recent legislative hearing it doesn’t really know the effect of segregation units on actually producing a safer prison system. And finally, we also don’t know how many people are currently suffering from the heavily documented effects long-term solitary confinement can have on a person, particularly emotionally and psychologically vulnerable people in state prisons.

Solitary Watch will continue to monitor COMPSTAT data and present further information in the future.

2 thoughts on “How Many People Are In Solitary Confinement in California's Prisons?”