In a budget briefing held this afternoon, Illinois Governor Pat Quinn proposed closing the state’s notorious Tamms supermax prison. The proposal is part of a package of deep spending cuts to nearly all areas of state government, which Quinn called a “rendezvous with reality.”

Tamms holds more than 200 prisoners in long-term solitary confinement in conditions that have been denounced as torturous. Prisoners at Tamms spend at least 23 hours a day locked down in small cells, leaving them only to shower or to exercise alone in a concrete pen. They are fed through slots in their cell doors, and are allowed no communal activities, no phone calls, and no contact visits.

As in most supermax prisons, a high percentage of prisoners at Tamms suffer from serious mental illness, and for them the torment is even worse. In its 14-year history, Tamms has witnessed inmate suicides, suicide attempts, and self-mutilations.

When it opened in 1998, Tamms was purported to be a short-term solution for prisoners with disciplinary problems. Yet ten years later, a third of the original prisoners were still there, held in solitary for more than a decade.

In addition to its human costs, incarcerating prisoners at Tamms is also extraordinarily expensive: According to one calculation, the cost of keeping an inmate in the supermax exceeds $92,000 per year–two to three times the cost of the state’s other maximum security prisons.

With Illinois several years into a serious fiscal crisis, the immediate impetus for the proposed closure of Tamms is clearly financial. But years of activism and litigation, along with  scathing press exposes, undoubtedly helped sway the state to put Tamms on the chopping block. 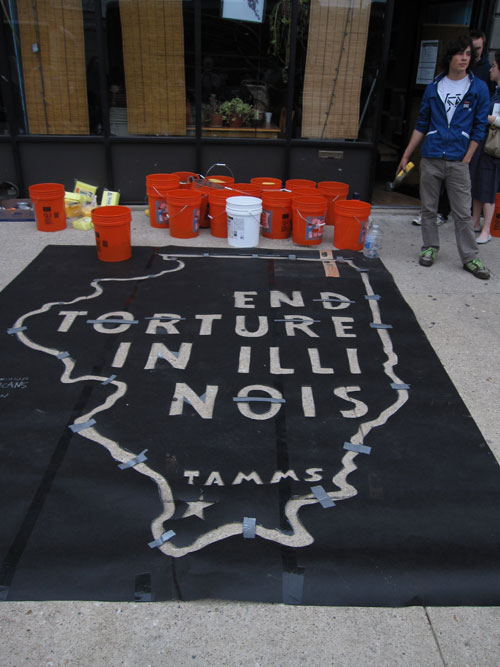 Grassroots advocacy, spearheaded by the group Tamms Year Ten, began in earnest in 2008, on the tenth anniversary of Tamms’ opening. In addition to mounting various educational and organizing efforts, the Tamms Year Ten campaign exerted pressure on state legislators, the governor, and the Illinois Department of Corrections–which in 2009 announced a “ten-point plan” for reforming the supermax. Subsequently, however, the head of the IDOC was pushed out, and most of the reforms were never implemented.

The movement gained traction, nonetheless, as a result of a series of investigations by reporters at the Belleville News-Democrat, which released its series “Trapped in Tamms” in August 2009. The series portrayed a nightmarish place where sane prisoners were driven mad, and where those with underlying mental illness suffered daily as a result of their extreme isolation.

In 2010, following a ten-year legal battle by Chicago’s Uptown People’s Law Center, a federal judge ruled that inmates at Tamms were being denied their Constitutional rights by being placed in long-term solitary without any semblance of due process. The same judge found that the “crushing monotony” and total deprivation of human contact were likely to “inflict lasting psychological damage and emotional harm on inmates confined there for long periods.”

Alan Mills of the Uptown People’s Law Center told Solitary Watch that in combination with the pressure from advocates, the legal case “gave the imprimatur of a federal judge to our long-time contention that long term isolation at Tamms inflicts serious harm on men’s minds—harm that continues even after they are released from Tamms.” In addition, said Mills, “by finally requiring the Department [of Corrections] to provide meaningful due process hearings to determine why each man was at Tamms” it forced the DOC to realize “that many of the prisoners who had spent years there, really didn’t need to be there. They transferred over 25 men out of Tamms as a result of this review process. I am guessing that during these reviews the Department began to seriously question what the real criteria should be for placement at Tamms—and ultimately decided it wasn’t worth it.” Finally, “All of this was crystallized by the desperate need to save money somewhere.”

Prisoner advocates were today affirming Quinn’s decision to promote the closure of Tamms, calling it “long overdue.” Tamms Year Ten leader Laurie Jo Reynolds told the Belleville News Democrat: “From the day it opened, Tamms has been a financial boondoggle and a human rights catastrophe. The staff to prisoner ratio is the highest in the system and the mental health worker to prisoner ratio is vastly higher…Because men can’t work or leave the cell, we just pay for excess correctional staff to shackle them, move them around, and push food into their cells. Then we pay to treat them when they become insane due to the isolation.”

But they also warned that the closure of Tamms is far from accomplished, and will face resistance from a number of directions–including not only corrections officials and unions and Republican legislators, but also Democrats from the southern tip of the state where Tamms is located. According to the St. Louis Post-Dispatch, “The rumored Tamms closure was drawing heavy criticism from Southern Illinois legislators throughout the day Tuesday. The criticism was directed at Quinn, a Chicagoan. ‘I’m mad as hell. I don’t know where this guy is coming from,’ state Sen. Gary Forby, D-Benton, wrote in a Twitter feed.”

Advocates urged backers of the Tamms closure to immediately contact the governor’s office to state their support for the plan.