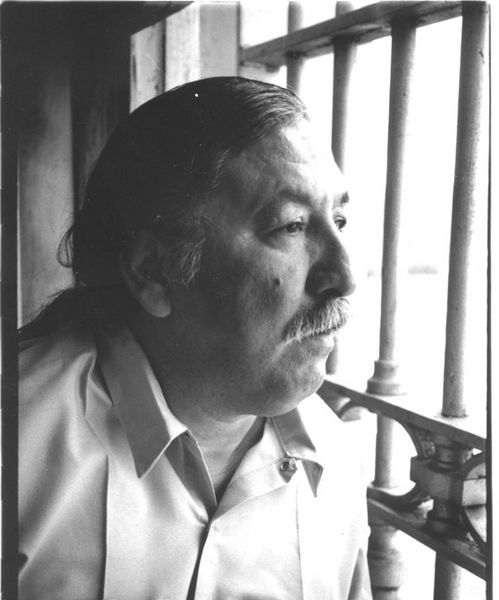 American Indian Movement activist Leonard Peltier has been removed from general population and placed into solitary confinement at USP Lewisburg since June 27th. The 66-year old inmate has been ordered to spend 6 months in solitary stemming from various petty infractions, according to his attorney, Robert R. Bryan.

Peltier, in a letter to his attorney, described the cell as a “cement steel hotbox” with little ventilation (a 1.5 inch slot under the door is the primary source of cool air). Due to the lack of suitable ventilation coupled with the heat of the summer, he has been “drenched in hot sweat” and indicated he had to stop many times while writing the letter due to difficulty concentrating in the cell. “My client has been put in the hellhole,” said Bryan.

Allotted five one-hour periods of exercise, Peltier spends 23 hours in a cell five days a week. The exercise is “in a cage” where water isn’t allowed. On Mondays, Wednesdays, and Fridays, he is allowed to shower. For the other two days, he is in his cell 24 hours. He is not allowed any personal visits.

According to a note that Peltier had written at the time, he had been preparing to eat breakfast the morning of June 27th when guards entered his cell and began “disrespecting my religious items” and “threatened to lock me into solitary.”

Peltier received a letter the previous day from a supporter in Scotland that contained a 20-pound note and had been inspected by the mailroom. Peltier had asked the mailroom to send back the enclosed money, but this request wasn’t followed up. He then addressed a letter to a friend and enclosed the note so as to send the money out of his cell and out of the prison, knowing that possession of unauthorized money was a violation of prison rules. This letter was intercepted at 8:00 a.m., prompting guards to search his cell at 9:45 a.m.

According to a second prison incident report, written the same day by a guard who searched Peltier’s cell:

[W]hile performing a search…I observed two wires protruding approximately 2 inches from the wall of the cell….The wires were located on the wall above the corner post of the upper bunk.. I attempted to pull the wires out of the wall. …As I attempted to pull the wire out of the wall my grip failed, my fingers slipped on the wire and contacted the bare ends of the wire. At that time I received an electrical shock through my right hand and forearm.

Peltier was deemed guilty of “destroying, altering or damaging government property having a value in excess of $100.” Peltier, however, did not sleep on the top bunk and the wiring was manipulated by a former cellmate. In addition, because of the guard’s decision to attempt to pull the wires out of the wall, Peltier was found to have engaged in “conduct which disrupts or interferes with security or
orderly running of the institution (Most Like) assaulting any person.” “Most Like” is a provision in the Federal Bureau of Prisons Program Statement that reads: “This charge is to be used only when another charge of greatest severity is not accurate. The offending conduct must be charged as ‘most like’ one of the listed greatest severity prohibited acts.”

Prison officials deemed Peltier responsible for the shock the guard received while pulling out the exposed wires, and deemed it an act “most like” an act of assault committed by Peltier. This is a “greatest severity level” violation,  meaning an inmate can be placed into segregation for up to a year. The charge of destruction of property is a “high severity level” act which can result in up to six months in segregation, and the possession of unauthorized money is a “moderate severity level” violation and could result in up to three months in segregation.

Peltier’s punishment for possessing money he had refused and attempted to send away, for being deemed guilty for the actions of a prior cellmate, and for “assaulting” a guard who chose to touch live wires is only the latest of the injustices that Peltier has faced.

Peltier was convicted of the 1975 killing of two FBI agents during a shootout on the Pine Ridge Reservation in South Dakota, which took place at the height of the American Indian Movement’s efforts to gain public attention regarding the plight of Native American tribes, the abuses of the United States government against Native Americans, and a wave of unsolved murders in tribal territories. The subject of a 1992 documentary and a European Parliament resolution of support, Peltier has always maintained his innocence. Critics have raised serious questions about the fairness of his trial, and he is considered by many to be a political prisoner.

The United States Penitentiary at Lewisburg is the oldest prison in the federal system, and one of the most notorious. Since 2009, it has also been one of the most heavily locked-down. In the words of the Bureau of Prisons, Lewisburg is now being “run entirely as a Special Management Unit (SMU) institution to operate as a more controlled and restrictive environment for managing the most
aggressive and disruptive inmates from USP general population.” Peltier was sent there in 2008 not for any disciplinary infractions, but
because he was the victim of a beating by younger prisoners at another federal  facility. “They’re hoping he’ll die there, that he’ll be forgotten there,” maintains his attorney.”

Peltier has been in poor health in recent years, suffering from hypertension, diabetes, and exhibiting symptoms of cancer. This is of particular concern given the vast literature pointing to significant detrimental effects of solitary confinement on both psychological and physical health, particularly when there are pre-existing conditions.

Peltier’s attorney has indicated that the placement into solitary confinement has slowed correspondence. A legal call has been delayed for several days and the prison has been slow to providing Peltier with the instruments necessary to write and send letters necessary for his legal proceedings.

Says attorney Bryan: “Prison officials are using this as an excuse to punish and torture my 66-year-old client. His health is poor because of decades of imprisonment. He needs to be placed back into the general population.”

More information on Leonard Peltier can be found on the Facebook page run by Peltier attorney Robert R. Bryan.